Can BC’s troubled Coastal manufacturing sector blend Interior and Coastal cutting technologies to be more responsive to export markets?  That regional challenge has never been sharper than at Western Forest Product’s Saltair Sawmill Division in Ladysmith, located on the 49th parallel on Vancouver Island.

Reopened this year after a 16-month shutdown, a dispersed employee base has regrouped, eager to work. The reopening also takes the mill back to its earlier days when Pacific Forest Products produced export grades.  Doman Industries acquired it in 1998, converting to dimensional lumber and hopping on the roller coaster known as the US housing market. WFP took over and closed it to rethink cutting strategies.

Today, divisional manager Dan Bowes, the former mill manager at WFP’s closed New Westminster mill (known for its flexibility in providing specialty export-grade cuts) is bringing together several aspects to make it all work: a diverse order file, a mill that was cutting dimension, a skilled work force with an export background, and the integration of a new management team into the community and operation.

Smaller Supply
Log supply is also an issue. Saltair is dealing with 6- to 18-in diameter logs on average, so by coastal standards it ranks as a small- to medium-log mill. Saltair is tackling the realities of the BC coast wood supply; second growth, diminished log diameters, and tight log supply. While Interior style dimension mills have written the book on fast lineal throughput, it doesn’t work for export. The answer lies in developing a coastal hybrid mill that is flexible, efficient, and can extract high-end export product from smaller logs.

“The difference between here and the Interior is that our market and product is far more diverse,” he says. “In a nutshell, the way the Saltair mill is set up right now makes it efficient when handling small logs for volume, but we need more options for our exports and North American order file.”

Bowes also looks at recovery in a different light than most coastal operators. “We are used to optimizing the log to get the best recovery, but we have not fully optimized the boards,” he says. This view is behind the mill’s new cut strategy.

“The CNM people said they had not done it before and I asked if it could be done,” he said. After some discussion with software engineers, CNM customized the program to work for Saltair. Bowes wants the trimmer to make a series of choices that would graduate the lumber through different paths depending on the recovery value in each board. Rather than just a trimmer optimizer, the Saltair mill will have an optimized trim line with two smart gates. As the lumber enters the line, the optimizer is targeting maximum recovery.

“There are really three things that the board can do,” says Bowes. The first alternative is simply trimming the piece and it flows into the sorters. Secondly, the system can cut the board into two pieces and send part of it back to the edger for a rip and the other to the sorter. The third option allows for a value-driven cut-in-two decision, sending both to the 118-bin sorter. These three alternatives are done through a series of smart gate dropouts and optimized decision logic. The enhanced trim line allows piece counts, value and recovery to rise without reducing productivity.

The Newnes trimmer optimizer was originally installed 10 years ago. The scanner frame and optimizer system’s hardware remain. Laser profile sensors are being replaced to increase scan density from 6 to 3 inches along the entire piece length, and to achieve an accuracy of  0.010" on wane and thickness and up to 0.032" accuracy in width. Length sensors are being upgraded to achieve CNM’s high definition plan view and increase length accuracy to 0.100" from 0.500".

Species and Markets
Gord Boone, production superintendent – also from the New Westminster operation that shut down – says Ladysmith will handle predominately cedar with second growth Douglas Fir and hemlock. The European market, which is a growing market for BC higher quality wood, is one the mill is targeting, while other cuts are being targeted to Pacific Rim countries. Already, says Boone, a delegation of Japanese lumber buyers has come to look at the mill’s restart.

The day the mill opened in February was more like a reunion than a work day. Older Pacific Forest Products employees, used to cutting export, were eager to make the switch back. Some passed on retirement to be part of the restart. Others had come from the Doman side for a whole new experience.  Nine management members transferred from the closed New Westminster mill had the opportunity to meet the merged work force.

“It was a relief it was over,” says union representative Charlie Gallagher, when talking about the closure. “We really had no control over our lives. It was a tough year.” Returning to the export cut philosophy “is nothing that we haven’t done before. It’s exciting to get into the export market,” says Gallagher, a mill employee since 1973.

Head sawfiler Bill Irving, who has been with the mill since 1990, was easing into retirement when the mill reopened. He jumped at the idea of coming back. “It looked like a couple of fun years with everything new,” he said. The filing room is indicative of what’s going on in the mill. It is cleaned up, the floor swept, and a crew of volunteers pitched in and painted the shop – something that hadn’t been done in years. Lighting in the fileroom – and throughout the mill – was increased.

Forintek was called in to align saws; arbors and chain drives were replaced, new saw-guides purchased and maintenance is focused on a high degree of cut accuracy, all geared to higher export demands.

Software Upgrades
When Saltair restarted, the immediate problem was that the edgers and trimmers could only handle four different products. Also, parts of the optimization system were home grown, and the designers were no longer around.

The mill’s breakdown line consists of a not always reliable bundle lift (one of the first on the Coast installed nearly two decades ago) that brought logs onto a log deck. (One of the mill’s planned improvements is a crane that will be able to release the bundled logs rather than having to do it manually.)  Logs went through a Nicholson A5 ring debarker and were bucked.  Bucked logs went into the CAE six-foot canter quad and conical canter heads using Porter Engineering optimization. This machine was to be retrofitted with a new sharp chain system in early summer. Sideboards go to two optimized board edgers and centre cants to canter gangs.

“The canter scanning is one of our biggest upgrades,” says Bowes, as it will collect more scanning information and provide options at the mill’s front end to boost downstream recovery.  In late April, a new transverse optimization scanning system by CNM was installed on the canter line. CNM account manager Joe Thompson says the new frame provides increased density in scanning and the software will provide the mill with better decision-making.

In the secondary breakdown areas, the boards flow into paired Ukiah edgers and then into a CNM optimizer trimmer. The mill has dual systems – including a second quad saw that is not being used. The teaming of two edgers also allows for more decision-making through optimization in the back end without causing production delays.

The new optimization upgrades end what has been, according to cut expert Rick Froehle, in charge of software, a frustrating situation. The mill was “very limited in what it could do” and that made it difficult to do specialty cuts. “This will give us the flexibility in our cut and allow us to better meet our order file,” says Froehle.

A CNM transverse edger optimizer system is also being added, and CNM’s WinTally system is being installed in both mill and planer mill to capture the piece count going to the sorters in real time. Information can be viewed in the mill or from a remote location, and it ties into the mill’s inventory system.

New Lives Starting Up
WFP’s New Westminster mill was labour intensive, as it didn’t have the streamlined breakdown systems and automation of Saltair. But, says quality control supervisor Shawn Scheer (also from the New West plant) the mill did have a solid reputation for producing a quality overseas product. And, it had some good systems in place, such as using Real Time Size Control by SICAM. A used system is currently being installed at Saltair.

Scheer says both the management team and the employees are convinced they can blend technologies to make Saltair work. Managers have sold their homes on the Lower Mainland and moved their families to the Island, many settling in Ladysmith, the town that Harrowsmith Magazine once proclaimed as one of the top 10 most livable small towns in Canada, with its seaside location, scrolled woodwork houses, and population of just under 8,000.  For some, the difference in lifestyle and housing has meant walking away from a mortgage.  For the returning workforce, it has meant more security. “We have had great cooperation and support from our employees, community and government,” says Bowes.

Bowes is convinced that all the components are in place, and that by using the strength of each – a very knowledgeable and motivated workforce, a current knowledge of export markets, and a new hybrid mill that has hardware streamlined to commodity production but software that gives greater cutting options for a broader world market – it will all work. 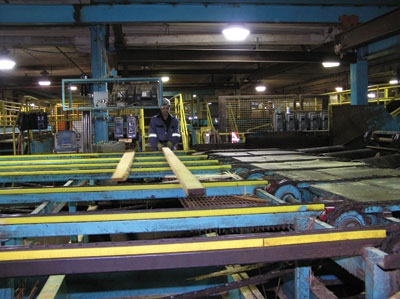