May 19, 2016 - When C & C Resources purchased the Edgewood Forest Products sawmill in Carrot River, Sask. from Weyerhaeuser and started to operate it in 2012, Edgewood’s mill owners and management quickly realized they needed a new home for its larger logs and improved lumber recovery.

Back in the days when Weyerhaeuser operated the mill, up until 2007, the company also owned a plywood plant in Hudson Bay, Sask. – also purchased by C& C Resources. The plywood plant was the home for the majority of Weyerhaeuser’s larger logs. But since that plant was still shutdown when Edgewood took over the sawmill in Carrot River, the company quickly realized it would need to form a plan for its bigger wood.

“Without the plywood plant in operation at that time, it became very apparent that we needed a home for our bigger logs,” explains Byron Warner, manager for Edgewood Forest Products’ Carrot River sawmill. “There’s nobody in the province that wanted these big logs – although we do sell some to Manitoba – so that was the initial push, either get into plywood or upgrade the sawmill to accommodate the logs.”

Lumber recovery was another factor in the decision to invest in the sawmill.

“It was older technology we were operating,” Warner says. “There was no scanning, no optimization in the old mill. Whatever fell in the trough was the way we fed it through. We produced a lot of wood chips and our recovery wasn’t what we wanted it to be, so here we are today, improving.”

After years of planning and a $25-million investment in new equipment, the sawmill is upgraded and is now operating with a ton of new features, which has the mill’s management expecting a big uptick in annual production. The first log was pushed through in late January and production started back up on Feb. 15.

To accommodate the bigger logs, Edgewood purchased a used Nicholson debarker so they could process upwards of 21-inch logs, which was installed in the summer of 2015; built a new Wellons dry kiln to accommodate the increased production, which was installed last winter; and teamed up with Linck to design the entire mill to be a single line with no returns or rework of any kind.

Linck oversaw and managed the upgrades and were the suppliers and installers of the majority of the new equipment, including two-sided chipper canters, log turners, profilers, horizontal and vertical saws, operator booth controls, safety fences, Springer-Microtec 2D and 3D scanners, a Metsutronic metal detector and more.

“It just goes down the line and goes to the sorter,” Warner says.

From the planning stage to installation, the new Linck line took about 15 months to put in place, which included an addition made to the facility that increased its size by about 30 per cent. The line was custom-built for the mill, which is nothing unusual for the supplier.

“There’s no one Linck line that’s the same as another,” explains Linck’s Damien Meyer, who oversees the company’s Canadian operations.

The addition made to the building helped avoid future issues for the mill, according to Meyer. He says that the line could have been squeezed inside the original building but it would have been complicated and cut short potential upgrades.

To ensure that the mill’s staff is comfortable with running the new line, six months of on-site training with Linck’s experts was provided. This helps build strong relationships between the mill and the supplier. That way, when someone at the mill has questions about running the line in the future, they can call their contact at Linck who will be able to answer their questions quickly for them, Meyer says.

The new line
A Caterpillar wheel loader equipped with a Denharco Paralift moves cut-to-length logs in eight- and nine-foot lengths on to the initial conveyor, where they are sent to the new Linck line. The line starts with logs passing through a Metsutronic metal detector and a Springer-Microtec 2D scanner system with this section of the line equipped with a reject bin for metal and un-merchantable timber. The logs then go through a Springer-Microtec 3D scanner where it is optimized.

The goal of the sawmill is to optimize pre-sorted logs before they enter the saw lines. The mill is equipped with seven bins and five of them allow for the pre-sorting of the logs, so when logs are taken from those five bins, a message goes through to Linck’s optimizer and it pre-sets the cutting pattern for that particular bin, Warner explains.

“It runs very fast in those bins,” Warner says. “We run the smaller sorts at 150 metres per minute.”

The mill also currently has two bins that are scan and set.

“This slows us down because we have to scan the log, position it and saw it accordingly,” he says.

Once the logs go through the optimization and sorting process, they are sent through a Linck two-sided chipper canter, a log turner and then another two-sided chipper canter. They then move to a profiler that profiles the sideboards and saws them off at the saw section. The log then moves through another log turner and another profiler for profiling the other sides of the logs and another saw section that will remove that portion of the wood. The remaining wood enters a horizontal saw line that processes up to a 12-inch cant, which will cut the logs into two six-inch cants, one on top of the other, and then send the wood through a vertical saw section that saws the lumber.

Edgewood installed a used Gemofor lug loader for the upgraded saw line and installed it at the J-bar sorter, which was started up by DO2 Controls.

“We changed some of the lumber transfers because it used to go through a board edger and we don’t need one anymore in this process,” Warner explains. “Our sorter is 10 bins so it’s quite small, and we’re trying to speed that end up. The sorter runs faster with the new lug loader.”

The company also upgraded its Newnes Equipment (USNR) stacker with a tier generator from Mill Tech Industries to increase its speed so it can keep up with new line.

The green lumber is then sent to the mill’s two Wellons dry kilns, which operate 15MM BTUs and can dry upwards of 285,000 board feet per charge.

At the planer
The planer has a very short infeed, which causes some challenges for cycling the wood, especially after installing the new saw line.

The lumber is fed into a Coastal planer, which is equipped with a VAB optimizer installed a little over two years ago along with a positioning fence installed in front of the trimmer by DO2 Controls.

“It’s very accurate and increases the length of our boards,” Warner says.

The boards are then sent through Z-Tec Industries labeling and printing equipment and forwarded on to a Newnes Equipment stacker and sent through a Signode metal strapping machine.

Warner says one of the upgrades he would like see in the future is to upgrade to a plastic strapping machine.

“For the wrapping station we built a trolley but there are better ways to do that,” he says. “The back end and the infeed are both areas in the mill that can still be upgraded… there’s some pretty big opportunities in our planning process – infeed, outfeed, both ends of the planer mill can use some improvement.”

Residuals
The mill plans to incorporate upgrades at some point in the future for more of its residuals,

“We need to be very aware of our environmental issues,” Warner says.

Currently, the sawmill’s wood chips are sold to Tolko’s Kraft Papers mill in The Pas, Man. and some of the planer shavings are sold to a Hutterite colony in Raymore, Sask. where they are bagged and sold as high-end animal bedding.

Board feet boost
Before the upgrades, the mill was processing 350,000 cubic metres of logs with a total annual production of 75 to 80 million board feet. The lumber produced at the mill includes 1x3, 1x4, 1x6, 2x3, 2x4 and 2x6 in nine-foot lengths; produced from white and black spruce, jack pine and a small amount of balsam fir.

Warner expects the upgrades to boost production at the sawmill substantially.

“We hope to get 140 million board feet, and possibly more,” he says.

That’s exciting news for the sawmill and its 100 employees working in a community of 1,100 residents.

A little history
The Carrot River sawmill was originally built in 1975 and opened in 1976 by Crown-owned Saskatchewan Forest Products. The sawmill continued to operate after Saskatchewan Forest Products was sold to MacMillan Bloedel, which was then purchased by Weyerhaeuser in 1999. Weyerhaeuser ran the sawmill until the beginning of the U.S. housing collapse in 2007, which was when the company decided to shut down operations. It remained closed until Edgewood purchased and restarted the sawmill in 2012. 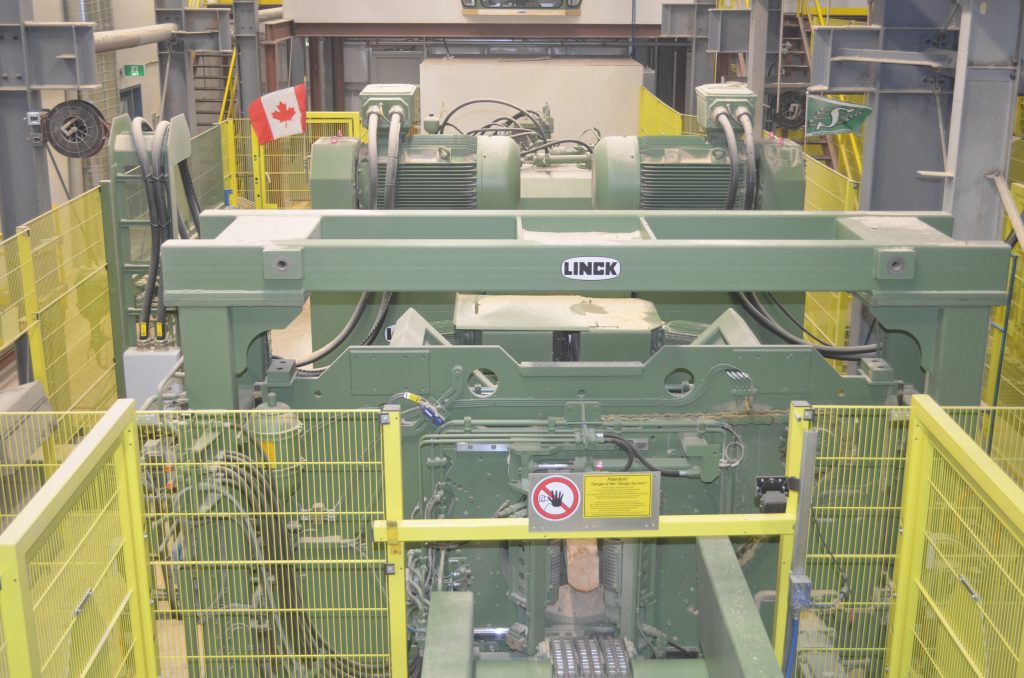