Features Mills Sawmilling
Saunas and sawmills: Inside look at mills in Finland and Estonia

Nov. 28, 2017 - The faint smell of burnt wood permeates Finland. The likely culprit: with a population of about 5.5 million, it is estimated there are four million saunas. 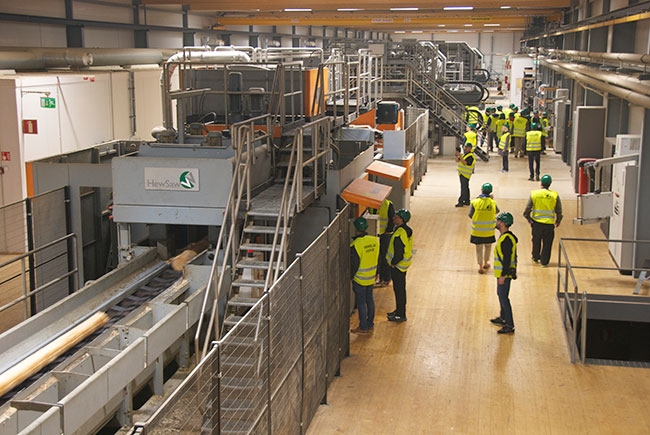 Many of those saunas are heated with wood – a valued commodity, and part of Finland’s culture. About 65 per cent of the country’s land mass is covered by the boreal forest. Much of that forest is owned privately and managed intensively for sawlog production, which makes the quality and price of saw logs significantly higher than in Canada. The situation is similar across Scandinavia and the Baltics and is a fundamental difference between their forest sector and ours.

“The philosophy here is to use every part of the log. There is zero tolerance for processing mistakes,” explains Martin Arula, managing director for the newly opened Toftan 2 sawmill in Estonia.

“We try to maintain the surface quality so we can optimize thickness and width,” Arula says. “We want a smooth, nice surface. It’s not that relevant in North America where you machine the majority of the products after the sawing. There seem to be bigger marked downgrades. Probably the raw material price allows you to do that.”

European sawmills are also challenged to cut for a diverse market of countries that have specific product requests. “In our case it’s so expensive that you really have to take care of every single log, every single board as well otherwise you are out of the business,” Arula says.

To some extent, Canadian sawmillers can learn from the Scandinavian/Baltic sawmilling philosophy. That is the idea behind HewSaw’s annual sawmill safari, which this year took North American sawmillers, consultants and engineers to two top-producing mills in Estonia and four in Finland. CFI was on that trip in September and gathered some insights into what makes these mills so efficient.

HewSaw has been running its sawmill safari for more than 20 years. Bill Tice, marketing manager for HewSaw in North America who organizes the tour, says on more than one occasion participants have changed their minds about the advantages of adopting the European sawmill philosophy.

“One of the main reasons we do this trip is so that our sawmills can pick up some new ideas,” Tice says.

Mill flow
The most significant difference between mills in Europe and North America is in the log yard. While in Canada logs are at most sorted in five to 10 bins, in Europe mills typically sort between 40 and 80 bins.

Logs there are first sent through a metal detector (Estonian mills often find shrapnel in their logs from battles fought in the Second World War). Logs are then scanned and emptied into bins according to saw patterns. Pre-sorting allows the mills to batch run. Minimal change means they can reduce the gap between logs and run at higher speeds, some mills as fast as 200 metres per minute.

Tice says he’s starting to see more sort bins in North American mills, and expects to see more in the future. “Typically they would be what we call ‘hybrid’, where it’s maybe six sort bins and they are also reducing the gap so it can be quite the advantage to do that.”

Technology
Toftan 2 sawmill in Estonia was built brand-new in 2016. Owned by a Swedish sawmilling group, Arula had the luxury of building the mill from scratch. It took him and his team more than a year and half to research what equipment they would like to use in the mill.

Toftan 2 runs three-metre spruce and pine with top diameters between three and 13.5 inches at speeds of up to 650 feet per min. In the log yard is a Nordautomation log sorting line equipped with log scanning from Limab OY. Inside Toftan 2 runs a HewSaw R200 1.1 with LogIn 2R, and with Prologic+ scanning software they can change saw patterns in a matter of seconds. Once a batch is complete (about 2.5 hours), full changeover can happen in about seven minutes.

With its unique configuration, Toftan 2 has the ability to be the highest producing mill in Europe. “We are very close to that,” Arula says. “We have the will to do it, the whole team. But that is not a target by itself; the target is to earn money. Profit is the most important thing and productively is just one part of the equation.”

Among their equipment choices is Canadian company Carbotech, which supplied their trimmer and the bin sorter on a CGV AB dry sorting line. The scanning system is Boardscanner from Sweden’s RemaSawco. “We’re quite happy with those machines,” he says.

Also unique to Toftan: their drying process includes a two-tonne load on the stack in the kiln to minimize twisting. The kiln is supplied by Finland’s Heinola Sawmill Machinery.

“The biggest reason to install x-ray is to better measure bark and in winter time also ice and snow. We don’t have to guess the bark percentage,” Luodelahti says. “The other thing is that seeing inside the log during log sorting means we can sort the same kind of quality logs in the same pocket. That makes for more stable timber quality after sawing and it makes timber sorting easier.”

JPJ Wood is continuing to test the x-ray scanner and is collecting and analyzing data to fine-tune the machine’s parameters. “I think that the result what we have now, after using x-ray couple of months are encouraging,” Luodelahti says.

A highlight of the tour was the Metsä Wood Vilppula Sawmill in Finland where an impressive HewSaw SL250 3.4 line was commissioned in 2013. The line handles spruce and pine with top diameters between four and 21.5 inches, at speeds of 200-600 feet per minute.

Vilppula’s line is similar to the HewSaw installed by Idaho Forest Group in Lewiston, Idaho, in 2014. (Read CFI’s feature on the Idaho mill at www.woodbusiness.ca/sawmilling/mills/eyes-on-the-future-2600) The four-phase breakdown line includes four-sided cant chipping, a cant saw, a ripsaw and an optional cross saw. A rotation correction system improves the log positioning.

Canadian company Prologic+ log and cant measuring instruments and programs optimize the line. The system works off campaigns of patterns built by Prologic+, that are based on customer orders. The patterns prioritize by price, but can be limited by specific needs of the mill. Some mills have up to 400 patterns.

Almost all the mills we visited have impressive safety systems with sensors that shut down the machines if movement is detected within a specified zone.

The tour also took participants to debarker manufacturer Valon Kone’s (VK) factory in Lohja, Finland. VK, recently acquired by Kadant, produces ring debarkers, inline butt reducers and centring conveyors for global distribution. The company is currently testing a prototype of a variable flare reducer that would change the optimization game for unsorted logs. The machine would adjust in real time according to the size and shape of flare to optimize each log.

The tour stopped at FinScan’s headquarters in Espoo, Finland, where the company develops its BoardMaster, EndSpy, and MoistSpy automated grading systems. Its scanners are built for both green and dry wood and are able to detect defects as small 0.25 centimetres.

Staffing
Walking around the mills in Estonia and Finland is almost eerie. The machines run with very little supervision. With this high level of automation, most mills employ what Canadian sawmills would consider a skeleton staff.

Reducing employee count is a touchy subject in Canada, particularly in communities where a mill is one of if not the largest employer. Yet across the country many mills struggle to find staff members who will stick around. Automation would be a boon for these mills.

At Toftan 2 just 18 staff members, including the mill manager and all maintenance staff, are required to produce 200,000 cubic metres per year – almost 85 million bdft. Those staff members were carefully selected from more than 250 applicants, Arula says, and trained for more than six months in Finland and Sweden at Toftan’s parent company mills.

This level of skill and dedication to the job may be the reason for what Gaétan Gagné, president of Quebec’s KTG Groupe, describes as a sense of pride in the millwrights we encountered.

“The people in the mills here are very proud and they love what they are doing. In Canada it’s tough because there are so many opportunities for employment. But the environment here in Europe is low stress; they take their time to do it properly,” Gagné says.

consultants and engineers to two top-producing mills in Estonia and four in Finland.

Forestry 4.0
With the mills cutting for a range of customers with unique product requests on any given day, a key component to their efficiency is communication directly with their log suppliers.

A sawmill will send specific instructions for species, sizes and lengths to their contractor each day, sometimes multiple times a day, to ensure they are receiving exactly what they need for a product order. One stop of the tour was at a private forest where a Ponsse harvester and forwarder were at work.

“The operator now has a preliminary optimization of the diameter and length ratio he needs to get cut from the harvest. Based on national forest scanning by aerial photos and satellite scanning, the forest logs are pretty well known all around the country. This is a benefit to the loggers, as there is an assumption on the price and volume and also quality, what to expect already in purchasing phase of the logs,” Kauppinen says.

The harvester then makes decision based on those product requests. “Naturally log characteristics force the operator to override the computer offer and do different product suck as a curve in the trunk,” Kauppinen says.

Take what you will
We can’t deny that European sawmills are impressive, but as Gagné  points out, not everything they do makes sense in Canada.

Clean up is one major takeaway for Gagné. “These mills here are very clean; no dust in the air. The buildings and conception of equipment here, from the installation and engineering, they are thinking about this point. I think it’s forgotten in Canada. In the long term we need to be thinking about this more.”

Messier agrees. “You can see the machines are very well maintained and they’re very proud of their machines,” he says.  “As far as how they operate the mill, they are run by very few people and are still very efficient with not a lot of downtime. It’s good to see that and we have to learn from that.”

The point of the trip is not about seeing who’s doing what right or wrong, Tice says. “It’s different here and it’s a great educational opportunity to see what is done in Europe and hopefully they take back some good techniques for their mills.”

Similarly, while most of us on the trip are not planning to buy and install a sauna in our homes, we certainly enjoyed our time at Herrankukkaro (Mama’s Pocket) – the largest underground smoke sauna in the world. And perhaps, now that we’ve experienced the Finnish and Estonian sauna philosophy, we’ll take a bit more time out of our busy schedules to relax with friends and family.