Logging operations in places like Sweden have already made great strides in reducing the am­ount of fuel needed to get a cubic metre of wood to the mill – Dropping from 5.4 litres/m3 to 3.7 in the past 20 years according to Swedish forest research agency SkogForsk.  Still, this 32% improvement is not enough, given the recent spike in diesel costs. A recent benchmarking study by SkogForsk’s Torbjörn Brunberg shows the average CTL crew in Sweden uses a total 1.7 litres to bring a cubic metre to roadside. Excellent numbers, no doubt aided by good wood, but the idea is to use these as a baseline for further improvement. Here’s some of what is, or soon will be done to improve fuel efficiency in Scandinavia. 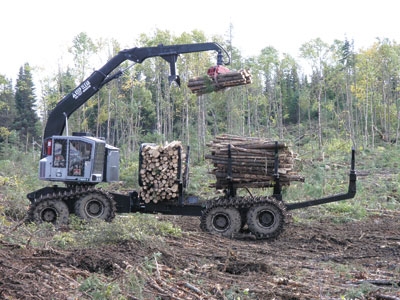 Better Operators
SkogForsk has studied the effect of forwarder operator training on both productivity and fuel efficiency, and the potential is impressive. Much like the Smart Driver program for log haulers currently managed by FERIC, the project involved first studying forwarder operators in action to get a baseline. Movements were videotaped, fuel weighed, and system operations recorded, all to get a baseline. Then operators were given a few operating tips, like not loading while moving, cranes were adjusted for smoother operation, and engines set to run around 1,100 rpm. Just this resulted in runs that were 10% faster, using 7% less fuel, and causing signifi-cantly less vibration and operator stress. While the project used forwarders, the principles and results are transferrable to just about any piece of logging gear. I imagine bunchers would likely yield the biggest savings in the Canadian context.

Of course, there are other factors that affect forwarder fuel consumption. For instance, in his survey of 500 machines over two week periods in March and September 2006, Brunberg found that forwarders fitted with wheel tracks burned more fuel than those without traction devices. He also found that forwarders used almost a litre per hour more in March (winter) than September.

Of course, most loggers who use tracks do so to meet flotation, traction or other ground condition needs, so the key here would be to recognize the effect, and work with track suppliers to match the most efficient track (rolling resistance or weight) to the conditions. In this area, not all tracks are created equal as Huldtins’ Garet Robinson can attest. The Canadian-based track specialist says there are things loggers can do in both track selection and maintenance to reduce the impact on fuel consumption. 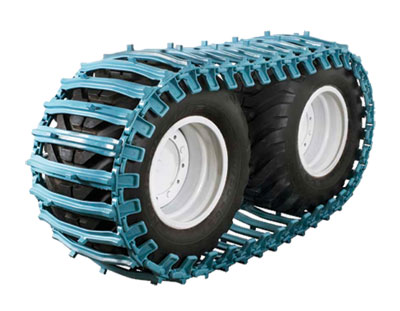 “Specific to Olofsfors track products, the biggest thing to lower your fuel consumption is using the ECO-Track models versus the older Conventional Tracks. With the raised linkage system closer to the tire radius, you get a smoother ride, less drag and can see approximately 20% less power consumption, resulting in less fuel consumption.”

When selecting specific tracks for your operating area, Robinson says it is important to choose a track that best suits your needs. If you choose a traction specific track and are in
softer conditions, you will see an increase in fuel because it offers limited flotation. With regards to maintenance, he recommends maintaining proper tension at all times. The recommended tightness is 25-50 mm (1-2″).  “This not only reduces fuel consumption, but prolongs the life of your tracks.”

Better Forwarders
Modern, electronically-controlled forwarders do an admirable job of bringing a lot of timber roadside with relatively low fuel consumption. Quebec loggers in the fuel efficiency story in CFI Nov/Dec using large (18-tonne or more) forwarders reported fuel consumption as low as 11 to 12 litres/hr.  Still, technology will improve further. In this light, machinery suppliers and loggers in Sweden are testing hybrid forwarders, using a small diesel engine to turn two generators to then charge six batteries that in turn run electric motors in each of the machine’s six independent wheels. As the machine uses its wheels to brake, the batteries are charged, again minimizing fuel consumption.

This EI-Forest forwarder has been designed by Lennart Lundström, and early trials by SkogForsk researcher Berndt Norden comparing it to a conventional forwarder show significant promise. In combination with other technology, like larger wheels and lighter weight (no bogies, as each wheel drives and turns independently), the hybrid forwarder used a whopping 35 percent less fuel to get the wood roadside. The PR benefits of having the first hybrid forwarder would also be considerable.

More Tips from the Pros
Researchers at SkogForsk are not alone when it comes to looking for ways to reduce fuel consumption per cubic metre. Scandinavian machinery suppliers have been struggling with the issue for years. Finland’s Kesla Oyj has attacked the issue on both log hauling and log harvesting sides, using lightweight and/or detachable loaders for the former, and machine design and common sense for the latter. In many cases, it starts and ends with proper maintenance, says Mika Tahvanainen, export manager for Kesla. 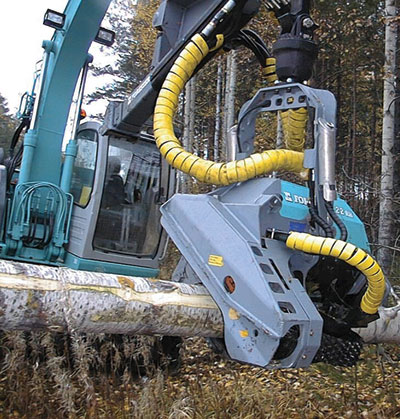 “In all machines, if your hydraulic system is generating a lot of heat, it’s telling you that your efficiency is not very good. You’re wasting energy heating oil instead of performing the task at hand. Still, loggers continue to run their equipment hot. Similarly, when it comes to the harvesting head, there are ways to avoid making machinery work for nothing. If you keep delimbing knives and feed roller teeth sharp, your head is not wasting energy. Also, keeping the clamping pressure of the knives and feed rollers as low as possible will avoid unnecessary friction. All of this has the added bonus of improving productivity too.”

He adds that the design of the overall harvesting head hydraulic system, and head geometry are key factors. Rather than solving issues with horsepower or flow, the proper oil circulation, valve and hydraulic hose sizing, and timber movement through the head will get the same job done for less.

Komatsu Forest, one of the suppliers working with Bowater in northern Quebec to reduce fuel consumption in the Nov/Dec article, also has day-to-day tips to get the most from the gear you already have. Here’s a smattering from their publication Just Forest:

• Adjust and calibrate machines regularly to maximize efficiency. For example, adjust the cutting sensor on the harvesting head for the right cutting movement, as even an inch of extra cutting movement will add up to wasted fuel.

• It’s the boom, not the harvesting head that burns fuel, so efficient boom movement is crucial. Operating an extended boom in front of the machine is a waste, as you’re moving that way anyhow. It’s better to move the machine up a little at a time. Work as close to the stump as possible, and avoid swinging trees from one side to the other.

Finally, I would add one more comment from years of watching forwarder operators. Avoid loading while moving into the stand, as it means you’ll carry that extra weight both ways, instead of just out. If you have any fuel-saving tips to share, give me a shout.