March 29, 2016 - The battle for skilled labour across Canada is hitting sawmills sooner rather than later, particularly in the filing rooms. To combat the shortage of qualified saw filers, some sawmills have been forced to hire back filers who have already retired on a contract basis to keep things in their filing rooms running smoothly. 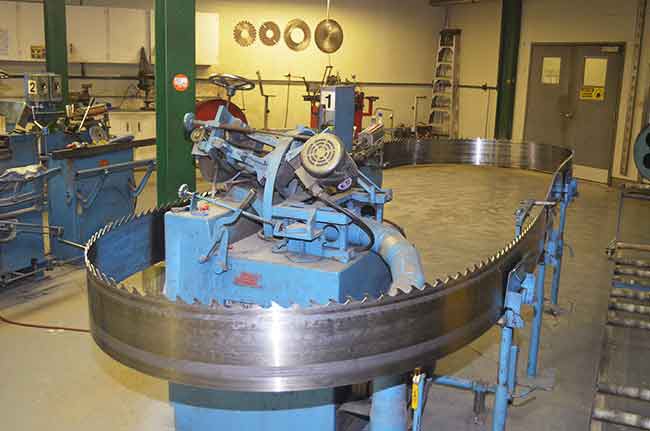 “Call it a labour crisis,” says HMT Machine Tools Canada’s Eric Gabara. “The fact is we’re coming up against the wall… that’s a big challenge. The other challenge is how do you attract young people to an industry that’s shrinking but needs highly skilled people?”

Hiring retired filers back on a contract basis is obviously a Band-Aid-styled answer to a very important and complex issue for mills across Canada. So what’s the long-term solution?

“There will be less and less filers, but they’ll find a way around that. It’s just keeping up with the technology,” says Cut Technologies’ Mike Weckel.

He adds that the proper training of the current and future generations of filers will be key to a mill’s success.

“The training of filers is important,” Weckel says. “The skill set these filers have is hard to replace. Pushing that off to the next generation of filers is hard, too.”

Attraction through automation
Mat Harris, product manager for Oleson Saw, a division of York Saw & Knife Co., says that as the potential talent pool that mills can draw from dwindles, automating aspects of the file room will be that much more important.

With the younger generations being born into a world of ever-changing technologies, saw filing rooms will need to adapt and reinvent themselves, in some cases, in order to get the attention of the next generation of skilled labourers.

“All the kids of this generation coming on board use iPads, cell phones, instant-access everything,” says Simonds International’s Ray Eluskie. “There’s absolutely no fear of technology from this generation.”

He says that saw filing equipment with touchscreens and other newer technologies can make older generations uncomfortable, but if you didn’t have these types of technologies saw filing will be that much harder of a sell to a younger workforce.

“I have kids that are 23 and 21 years old, and you won’t attract them telling them they’re going to work in a dirty environment and saying they’re going to be using a straight edge and a hammer on an anvil,” says Sylvain St-Hilaire, CEO of B.G.R. Saws. “They need to see some high-tech equipment showing up in the filing room.”

“The younger up-and-coming people in the industry want to see hands-off, robotic applications,” says Justin Williams, CEO of Williams & White. “There are big pushes for safety, computerization, robotics and automation. It gets people excited, it gets people engaged… compared to the traditional skills that are a little bit harder to market.”

In addition to updating filing rooms with the latest technologies, mills will also need to maximize the value of its remaining experienced filers going forward to cope with the shortage of people.

“There’s a lot of innovation coming into our filing rooms right now – the biggest thing sawmills are suffering from now is a lack of support for the people in the filing room,” explains Josh Bergen, co-owner of Precision Machinery. “It’s an industry where a lot of guys are retiring so there’s a lot of areas that can be improved because we don’t have the people to perform the tasks we used to have.”

Although automation will be a necessary component to counter the shrinking workforce in the filing rooms, it will never serve as a replacement for the decades of knowledge that may potentially be lost forever by the outgoing waves of retiring saw filers.

“You need to keep the known skill set of saw filers relevant and ensure it’s a worked on skill set, because no matter how automated you need to have the people with the knowledge,” Williams adds.

“You will be required to put some equipment in that will increase the automation level in the filing room and use the knowledge of the qualified people to make sure that all of the equipment delivers consistent results to the sawmill,” St-Hilaire adds.

Gabara adds that some older, experienced saw filers need to overcome their hesitations towards embracing new technologies both for themselves and for the next generation.

“I think we’re still in a scenario where a lot of guys are successful with what they have and don’t want to mess with that success,” he says. “If you’re going to attract a younger generation to that trade you have to have technology that the younger generation sees for their future.”

Supplying training
To ensure that the next generation of saw filers get the training they need, suppliers are going to need to play a role in their training.

“I think the industry will have no option but to work with people like us,” St-Hilaire says. “This is our business. I’m always telling people in the sawmills, ‘I’m not going to tell you how to cut lumber, you are the expert,’ but this is as true as trying to tell me how to manage cutting tools in your business because that’s what we’re doing. So I think the level of cooperation between vendors, suppliers and the industry will have to get to the next level.”

One of the solutions to ensure the proper training for the next generation of saw filing staff is achieved, may involve customized training that changes from mill to mill.

St-Hilaire says getting people custom trained for their sawmill is a solution that creates a perfect partnership between suppliers and sawmills. He says removing generic training due to the wide variety of equipment available in the marketplace could help filers at the tail-end of their careers adapt easier to the equipment being installed.

Clean it up
Another challenge for attracting people to the filing room is the perception, and sometimes reality, of a dirty working environment.

”In a lot of cases we simply need to clean them up,” says Simonds International’s Russell Barrett. “We need to enforce better standards of air cleanliness, that’s been neglected for a long time. In the better mills now, you see filing rooms that are kept properly cleaned, have machines with good functional dust collection systems, where guys aren’t afraid to sit down from fear of ruining their trousers… we’re seeing this in the high-end mills and it needs to trickle down.”

Barrett says the willingness of the younger generation to go to work in what could be considered a “grubby” environment is just not there anymore.

“By it’s nature, grinding saws and knives is a grubby process, so we’ve go to pay attention to what it takes to clean that up so that the work atmosphere is more pleasant. We’ve certainly got more conscious to potential damage for hearing, and that’s certainly being taken more seriously… but just the environmental aspects of the process need the same kind of attention that the mechanicals are getting.”

saw filing rooms will need to adapt and reinvent themselves.

The doctor is in… demand
One of more attractive qualities of becoming a saw filer that needs to be promoted to the younger generation is the employability factor.

“A competent saw filer can find work, essentially in any circumstances,” Barrett says. “It is a very portable trade if a man or woman elects to move their family into a region with sawmills. Competent saw doctors can always pick up work.”

He says too much emphasis has been placed on younger generations going to school for degrees instead of skilled trades, especially now that a large number of “professional” jobs that required a college or university-style education are being shipped offshore.

“Your electrician, your plumber, your heating and air conditioning people, your construction people, your saw doctors, millwrights can’t be shipped offshore, that work is here,” Barrett says. “And [saw filing] is a trade that can provide a good income and provide really solid prospects for employment. There’s a lot that is attractive. We’ve certainly not promoted ourselves very effectively as an industry that can offer kids that.”

“You’re going to have a more acute problem trying to hire highly skilled labourers in a rural environment,” he says. “I don’t see that many sawmills opening up in cities.”

Training the next gen
Even if you are able to attract young people to the filing room, they still need experienced filers to take them under their wings to be properly trained on the goals that the machines are supposed to achieve before the current generation retires and takes their knowledge with them.

“They will need a mentor to ensure the transition,” St-Hilaire says.

Without the proper training, many young saw filers risk being burnt out quickly by jumping into the industry with too much responsibility too fast, he warns.