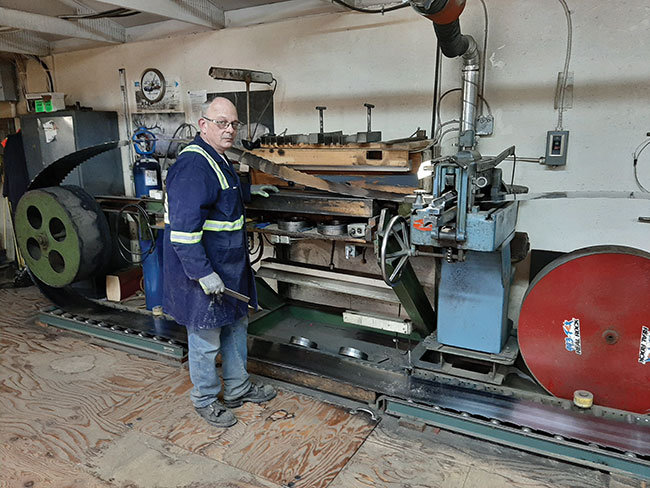 J.H. Huscroft head filer Terry Good has 38 years of saw filing experience under his belt, and is currently training a new apprentice to fill in once he retires next year. Photos courtesy J.H. Huscroft.

In 1927, John Henry Huscroft and his son Elmer started a portable sawmill on the family farm in Southern B.C.’s Creston Valley. The mill has moved several times since then and grown to become a well-known producer of top-quality lumber – mostly one-inch boards with timbers and dimensional lumber manufactured as required.

One good reason for the mill’s reputation for excellence is the 38 years of experience from their head filer Terry Good who, along with his crew, Donny Aldrich and Nick Bagnoli, keeps the equipment running and the saws sharp. There is plenty to keep them busy, starting with a six foot Furano bandmill with oil misters and – something you don’t see every day – roller guides! The 42-foot, 15-gauge slivertooth saws sport a two-inch pitch and typically get changed once a day.

Sharing the log breakdown duties is a HewSaw R200 MSA, which contains 14 saws and has proven to be an indispensable piece of equipment since its installation in 1998. The HewSaw replaced a 28-inch single arbour Ukiah, which in turn replaced the old 40-inch scrag saw. Due to the nature of the 11/32 bit-and-shank teeth on the Ukiah, the new line reduced the amount of sawdust produced by a load a day.

The mill also runs a Sherman horizontal double arbour gang edger that has a pair of gangs on either side of a shifting line-bar. This arrangement gives the mill the capability of cutting one-inch on one side or two-inch on the other with timbers in between. Forty-four saws fill the machine at any given time and are on a one-day rotation.

A Newnes shifting board edger, a multi-saw trimline, two 60-inch cutoff saws, and a five-foot deck saw round out the mill’s cutting centres. 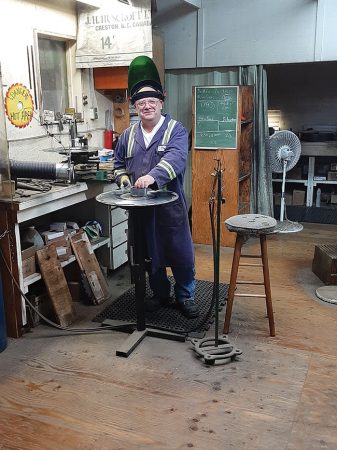 For the benchwork on the circular saws, the filers use an Armstrong #3 stretcher roll and another Armstrong 60-inch model for the cutoff saws. Everybody enjoys working on a clean saw and the MVM ultrasonic cleaner does the job quickly and efficiently. When it’s time to sharpen the big cutoff saws, they use a tried-and-true ACME post grinder. Guides are resurfaced on an IMW guide cutter.

On the bandsaw side, saws receive their initial treatment on a Simonds auto-levelling bench before making their way to Armstrong #4 stretcher rolls and a bandsaw bench for finishing touches.

In his 38 years of filing for J.H. Huscroft, Terry has seen a lot of change. Two banks of sash-gang saws, a scrag saw, and various edgers have all served their time and disappeared. The industry has boomed, busted and boomed again. New equipment is replaced with newer equipment and such is the case for sawfilers as well. After four decades learning his craft, it is now time for Terry to retire, but not before he passes on his hard-won knowledge to the new generation that will follow in his footsteps. The mill has recently brought in an apprentice who will help fill the ranks when Terry leaves next year.

In these days of huge multinational companies and upheaval in the industry, it is good to see family-run mills prospering amid the chaos. Small filing rooms are the backbone of the sawfiling trade. It’s in these small shops that traditional skills are taught and practiced away from the latest and greatest high-tech equipment of the large mills. The filing room at J.H. Huscroft is a great example of how old-school knowledge will come out on top every time.

CORRECTION: The printed version of this article misspelled J.H. Huscroft. CFI sincerely regrets the error and any confusion it may have caused.