Oct. 15, 2014 - The lumber business is a difficult line of work to be in in eastern Ontario. Just ask Ed Heideman, owner of Heideman Forest Services.

Heideman and his family have owned the business for 40 years, with his father, Lavern, starting the operation in 1974. In 1976, he built a large log mill on a sandy plot of land southwest of Eganville, a small town around 120 km WNW of Ottawa, near the border with Quebec.

When the recession hit the Canadian lumber industry in the early 1990s, Lavern decided to retire from the business and Ed’s three brothers chose to leave the industry. That left Ed as the only member of the family willing and able to continue the family business and take over full ownership of the logging and sawmilling operation. In 1996, with the lumber industry starting to recover, Heideman added a small scragg mill for smaller logs to the site.

Both mills run on a steady diet of softwood and hardwood lumber. The mill primarily processes red and white pine, which accounts for close to 70 per cent of the wood they receive. Heideman also saws quite a bit of oak, accounting for about 20 per cent of the company’s total business. The remaining 10 per cent of business is a mix of wood, with some ash, poplar, maple, basswood and birch coming in to the yard. In total, Heideman cuts around 120,000m3 per year, with another 30,000-40,000m3 being sold from the mill as roundwood. The logs are purchased from contractors from a radius of 300 km around the mill, extending throughout eastern Ontario and in to Quebec.

The majority of the Heideman business stays within Ontario, despite the close proximity to the Quebec border. Approximately 90 per cent of the mill’s red pine stays within the province, with only side cuts and a few boards going elsewhere. The red pine is primarily cut to 4x4 and 6x6 lengths, along with some dimensional lumber. The 4x4 and 6x6 cuts are used in the Ontario landscaping industry for decks, fences and retaining walls. Much of the other hardwood and softwood lumber offered by Heideman is also sold into the landscaping and home construction market.

Heideman also boasts a steady business for bark, chips and sawdust. Approximately 70 per cent of the chips and dust produced at the mill are sold in to pellet manufacturing. Trebio has a wood pellet production facility in Portage-du-Fort, Que., just 50 km east of Eganville. The mill also provides dust and chips for pulp and paper manufacturers throughout a wide territory, including regular sales to White Birch Paper locations in Quebec, Uniboard in Mount Laurier and Domtar in Espinola, Ont.

Inside the mill
Over 80 per cent of the original mill built in 1976 is still intact. The original debarker, carriage, trimmer and head saw are still in place, as are many of the major components installed by Lindsay, Ontario’s TS Manufacturing. The same edger remains, but the guidance has been taken out.

The entire system was designed and installed by TS, who builds turnkey sawmill solutions for the industry in Canada. They are also responsible for many repairs that are made at the mill, as well as some of the minor adjustments that have been made to the system.

Heideman has made a few adjustments to the large log mill. He purchased a step feeder from the former Proboard mill in Atikokan and added an extended log deck for the mill. The company also purchased a grade tally system from Autolog a few years, which has paid dividends for the mill.

“We’re very happy with the grade tally system,” says Heideman. “It has made a big difference for the mill. It provides us with better information, telling us much quicker where the issues and problems are. We see it right away so we can correct it right away.”

Heideman also had the team from TS install a re-saw in the large log mill. The original gang saws limited the dimensional lumber that the mill was able to cut and the ease with which the size and shape could be changed. The addition of the resaw has changed that.

“The resaw at the large log mill – it gives us the opportunity to expand our options,” says Heideman. “We can make more size combinations and give our customers more of what they want. It has helped production, produced better lumber, and given our customers more options.”

Facing restrictions
Heideman and his team would like to expand their operations, but face a series of financial and environmental challenges that prevent them from moving forward with significant investments.

Financially, the unstable cost and billing of hydro in Ontario has been a source of constant frustration. Hydro is a very touchy subject around the office, as the team attempts to understand the methods to the way the company has been billed and how accurate the numbers actually are. Heideman has been subject to inaccurate billing methods and policies on several occasions, with bills showing hikes and discounts of several hundred per cent month over month despite a fairly consistent overall use of power over that same time period. When you aren’t able to understand how much, or when, you will be billed, it becomes difficult to fund other capital projects in and around the mill.

But the environmental restrictions have become the number one issue facing the company in recent years. It has shrunken harvesting seasons throughout eastern Ontario and has added restrictions to the lands that can be accessed as part of the annual allowable cut. Water restrictions are also a factor, with soggy lands and weak roads adding another layer of complication for accessing quality wood.

“If you are fortunate that the ground starts to freeze up in early December, then you’ve got December, January and February to harvest,” says Heideman. “Other than that, it’s getting very difficult to find an area that you can harvest that doesn’t have an animal or plant, or doesn’t have timing restrictions for water crossing.”

Not only can understanding the restrictions difficult, it is also a challenge to keep up when new restrictions are introduced; so many have been written into law in recent years, and continue to be added, that it is tough to know what lands could be closed to logging in the years to come.

Adding to those issues are the needs of the wood that is being harvested for the mill. White and red pine has to be handled very delicately, especially during the summer months, as it can stain. According to Heideman, that means getting the logs under water or through the sawmill by June 1st. Barring that, a watering system has to be added to the yard to keep the logs that don’t get sawn in time. Another cost and another risk, which can also be hampered by restrictions for summer water use.

For now, Heideman continues to mould his operations around his current limitations and the team that he already has in place. The mill has close to 100 staff, most of which are full-time. The bulk of the trucking and harvesting operations and contracted out, with those companies taking on the responsibility of finding additional work outside of the three-month harvesting period.

Until working conditions change thanks to a shift in energy and environmental regulations, that’s all Heideman and his team can do to keep processing quality lumber, chips and sawdust at their mill in Eganville. 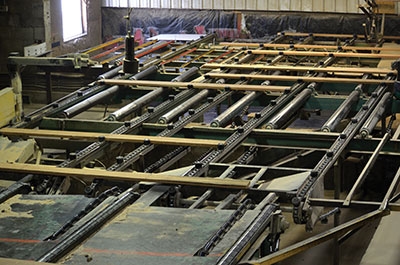 TS Manufacturing installed the original large log mill equipment in 1976. Today The lumber business is a difficult line of work to be in in eastern Ontario. Just ask Ed Heideman
Print this page