As important as scanning and optimization are at the sawmill, they’re also critical at the planer mill. These processes are an opportunity to minimize losses and maximize profits through detection of defects for assigning grades or re-cut – and for things like removal of boards too high in moisture for re-dry. “Accurate sorting and trimming of our finished fibre for appearance and strength is essential for customer satisfaction, product liability and mill profitability,” says Ron Mohr, quality control superintendent at B.C.-based Conifex.

As important as scanning and optimization are at the sawmill

At their Fort St. James, B.C. planer mill, Conifex uses the Comact Grade-X system, and although no system will be 100% accurate, Mohr says it performs very consistently. At their MacKenzie, B.C. planer mill, they’re now in the process of selecting an optimization system. “Currently, we have four human lumber graders on each shift, with the fifth swapping places with the others to give them a break,” says Mohr. They have a total of 12 graders at the plant, which with ongoing training, represents a significant ongoing cost. “Humans can perform at a high efficiency rate, but not all day every day, all year long,” adds Mohr, “and an optimized auto-grading system, when managed well, will perform at a high rate of efficiency all the time.” He believes the payback time for a new scanning and optimization system will be short. In terms of how they’ll make their decision, Mohr says the optimization system they’ll choose will have to grade all defects found in lumber, and be able to trim and cut-in-two to extract maximum value.

At Tolko’s planer mills, they use a variety of scanning and op brands, with each mill manager making individual decisions on what technology is most appropriate, says Larry Broadfoot, general manager of lumber and plywood sales. “Each bio-zone of the province has its challenges,” he observes. “In terms of species differences, you want to pick up defects like heart stain or white speck – and shake due to Mountain Pine Beetle is a big issue at some of our mills.” The company’s current overall optimization focus is in its planer mills, with a goal of moving ever closer to automatic grading at all locations. “Two mills have these systems, but we also have a person there for handling as much as for grading,” says Broadfoot. “I haven’t seen an automated grading system that completely nails it yet, but they’re all getting close.”

Broadfoot views defect accuracy as the most critical aspect. “With shake, it’s fine lines that need to be detected, and accuracy is well into the 90 percentages but there are still some issues,” he says. Right now, Tolko uses Comact technology in its stud mill, a linear grading system from USNR in a dimension mill and a lineal Autolog system in another dimension mill; upgrading is ongoing.

EACOM has nine planer mills, seven of which use geometric scanners (without cameras) from the 1990s. All of these will be upgraded to full graderless capacity eventually, says Eric Michaud, senior vice-president of sawmill and forest operations. At the two remaining planer mills, there is one close-to-graderless Autolog system. It was installed in 2005 and is used for 16-foot boards. It will likely be upgraded in 2012. The other mill is an eight-foot stud line that had a VAB graderless system installed in 2010. “It’s a lineal VAB system with a simple design that does the job very well for picking up stud defects,” says Michaud. “There are fewer components and less maintenance, and we really like the team at VAB – these have been the main reasons why we decided to go with them for this specific project. We work with them on R&D as a team and that made this project a complete success.” Michaud says graderless systems make the most sense for EACOM because they are constantly losing skilled workers to the mining sector. He believes cost return for this system will be achieved sometime in 2012. “We’ll likely choose VAB for another two stud planer mills in the near future, but we’ll be looking at all options for our planers that process random material,” he adds.

In the last few months, Comact has further enhanced GradExpert’s performance with a dual-row camera system (patent pending). “Each board face is scanned twice at two different angles, which is a major breakthrough for split/shakes/check detection,” says Desjardins. GradExpert can also now categorize and optimize many levels of blue stain as well as blonde knots.” A new quality control station allows customers to extract boards from the line and analyze them instantly, for re-optimization and retracing defect issues. Comact is also working in partnership to develop planer mill bundle analysis with GradExpert. This technology will provide statistics on dry kiln performance, and comparison of actual grade versus that expected from the sawmill.

“USNR’s recently released Transverse High Grader uses the proven technology from our LHG system and combines it with our extra-high resolution BioLuma 2900LVG+ sensor, creating a scanning system that is simpler and better than any other transverse system available today,” says spokesperson Colleen Schonheiter. The system provides four-face scanning with only two rows of sensors. “LED lighting modules at top, bottom and off-axis illuminate the finest board details for ultra-precise vision imaging,” Schonheiter notes. “And with a high-speed, flat lumber transport system, THG is unmatched in transverse grade scanning capability.”

MPM
MPM’s planer optimization system provides a 360-degree scan around the board in quarter-inch spacing along the length of the board. “We also provide colour vision for grade optimization and processing rates of 200-plus boards per minute,” says sales and marketing manager Dick Komori. The system can include a wane-up board turner in front of planermills and integration of MSR (machine stress rated) data, the choice of transverse or lineal scanner configurations and an interface with lumber sorter controls to meet customer orders.”

Building on over 15 years in the industry, VAB Solutions’ new Planer Mill Lineal Grading Optimizer offers competitive pricing with one of the fastest ROI in the industry, says Jessy Ross, sales and marketing manager. The graderless system, which has been sold to more than 10 customers at this point, offers a combination of lineal and transverse measurements. “It also has a user-friendly and complete graphical interface and is a maintenance-free system,” says Ross. “The optimizer detects face and edge wane, face and edge skip, warp twist, bow and crook, decay, rot and white speck, splits, shakes and knots.” VAB Solutions offers a free trial run of its technology, and also offers flexible financing conditions, allowing planer mills to extend payment over one or two years. 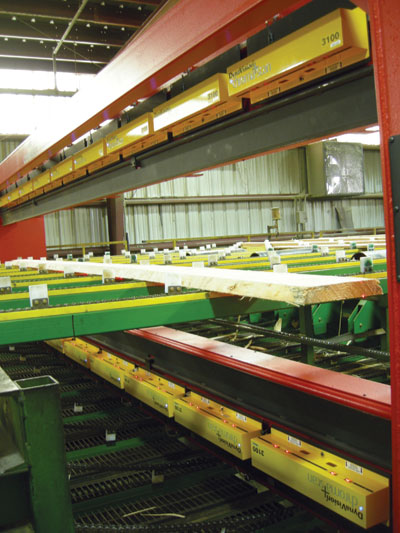 The Dynavision chroma+scan 3350 series of transverse board scanners from LMI Technologies, provide very high 3-D profiles every eight millimetres along the board length. “In addition, the customer can select either integrated full-colour images with 1mm x 0.5 mm resolution or integrated scatter to detect knots, surface defects and grain angles,” says VP of Marketing Barry Dashner. “What differentiates the chroma+scan 3350 is its very high performance (speed and quality of data) achieved by having multiple functions, 3-D profile + colour image or 3-D profile + scanner, built into the same head. In addition to the high performance, this saves cost in installation and maintenance and, most important, ensures that all of the data works together.”

Autolog
The Autolog Prograder linear planer mill optimizer has received a major facelift over the last four years and, thanks to its newly designed sensors and software algorithms, the system is now offered to the industry as a fully graderless system. “New 3-D sensors with an accuracy of 0.003 inches working together with High Definition 3- CCD colour cameras and with dense Tracheid sensors are among the elements that make the Autolog Prograder the most recently bought planer optimizer system on the market,” says sales manager Gabriel Payant. The Prograder comes with state-of-the-art technology, including server type grade computers with dual power supplies and hot-swappable hard drives. The colour cameras lighting system consists of high-power industrial LED light bars linked to a controller, which constantly adjusts the level of light hitting the boards. All sensors are housed in a retractable central module with easy-access doors for faster maintenance and service. “Many others items such as dual UV Code printers/readers, a 150,000 boards tracking system with Hewlett Packard ink jet ID printer and an air knife system to keep debris away when scanning are offered at no extra cost and allow an uptime close to 100%,” adds Payant. “In addition, a newly designed dynamic grading zone installed on a flat chain before the lug loader replaces conventional spray marks and offers many more possibilities to quality control personnel.”

MiCROTEC
MiCROTEC’s new Goldeneye-700 Multi-Sensor Quality scanner is used in planer mills and recognizes defects on, and inside lumber at speeds up to 1,000 metres/minute. MiCROTEC Multi-Sensor Technology blends advanced and powerful scanning modules to one virtual eye with the aim to maximize recovery. The available modules consist of various types of colour, laser and X-ray scanners. The company says it designs and develops its very own intelligent CMOS-sensors and cameras, which are among the fastest and most accurate available on the market. Also the X-ray sensors are designed specifically by MiCROTEC in order to assure accuracy and an extended life cycle of the sensors. “In addition, laser interferometry has made it possible to optically stress-grade timber and lumber in high-performance structural grading lines,” says Canadian sales manager Ludwig Fleischhackl. “This technology prevents measurements from being distorted by ambient influences.” Goldeneye-500 is a more compact version for use in rough mill and for millwork and moulding. This Multi-Sensor Quality Scanner is also built in modules for easy configuration and customizing while addressing customer requirements.

JoeScan
The JS-20WX scanner from JoeScan enables dense coverage of all sides of the board in trimmer applications, says president Joey Nelson. “By contrast, traditional multi-point sensors only give data every few inches along the length, and only on the top and bottom surfaces,” he explains. “By providing more data over more of the board’s surface, the JS-20WX enables more accurate optimization decisions. It helps the optimization software to differentiate steep wane from square edges, and enables precision length, and width measurements, without additional hardware.”

Lucidyne Technologies
Having successfully graded Dimension lumber at continuous planer production speeds of 3,800 feet/minute, Lucidyne Technologies Inc. is committed to more milestones. “Fibre quality issues have encouraged us to double the resolution of some sensors and integrate new sensors into our GradeScan system,” says Bill Briskey, director of marketing and sales. “Shake, decay, and fibre direction analysis are areas where improvements can have a significant positive impact on a mill’s yield, especially with the challenges presented by the need to harvest and process dead/dying timber.”

Treena Hein is a freelance journalist based in Pembroke, Ont. She researched and produced this article for Canadian Wood Products.