Logging companies on the coast of B.C. may find export regulations unfair and cumbersome, but they’re the only things keeping Coastland Wood Industries afloat according to the president of the company, Hans de Visser,.

Coastland Wood Industries Ltd.’s veneer business in Nanaimo, B.C. is based around high volume, lots of capital, continuous improvement and low costs. It is a peeler plant that seeks out the smaller logs no one else wants – or at least that’s how the company started. Over the years, demand for these smaller logs has risen dramatically.

“When I joined the company in 2006, there was virtually no Douglas fir going to Japan for Japanese peelers,” de Visser explains. “Today, the log that we get to buy is after the Japanese portion has been removed. So the export falldown is what we run our business on today.”

The Japanese veneer mills go for the premium Douglas fir second growth logs and the Chinese market seeks out the lower quality logs. “When I started with the company in 2006, there was virtually next to nothing going to China. Today, it’s just a huge vacuum that’s swallowing up everything. And moving forward, I’m not sure what the world’s going to look like, de Visser says.”

Despite this uncertainty, the mill is betting on its ability to acquire enough small Douglas fir to keep three lathes peeling up to 20 hours a day. “Our strategy is we buy the smaller log because it’s cheaper and then we put a whole lot of money into equipment, software and process control so that we can make a high quality product from cheap logs,” de Visser says. “That way we stay out of the market for the big logs that traditionally sell for higher prices.”

Coastland doesn’t have any tenure, so its vice president of fibre supply, Clint Parcher, has to be creative to buy 850,000 m3/year of logs to keep the plant running at full tilt. Last year, the company was making do with about three weeks of inventory to spare.

“Rarely we’d get a month’s worth ahead of the mill and that’s all we could buy with Clint and his guys running all over the place scrounging up everything they could. And the rest is going offshore,” Parcher says.

Parcher has come up with a variety of creative methods to secure logs. “We’re neutral territory and I do everything that I can to get along with everyone out there that I can,” he stresses. “There isn’t anybody that owns a tree that we don’t buy logs from. We operate dryland sorts and we do custom sorting. We don’t make a lot of money in the dryland sorts but the goal of it is to work closer with our customers and peel out what logs from the dryland sort that we can for our own business. We pour a lot more capital and risk into our business in order to acquire logs.”

Securing logs may be the company’s day-to-day struggle, but over the long term, the manufacturer struggles with shifting political policies and will. Coastland recently spent close to $15 million adding a third lathe because it felt there was going to be some short-term stability, politically speaking. But looking ahead 10 years or more, de Visser finds there are too many disadvantages to being in the wood product manufacturing business on the coast to feel comfortable investing more money in the company.

“If I knew from the government that what we have today wasn’t going to change, I could live with it,” de Visser says. “I’ve got lots of ideas of things I could do to take this company to another level. With the uncertainty on the policy side, I don’t recommend it,” is his bleak advice to others in his situation.

De Visser fears there are too many obstacles for manufacturers on the B.C. coast to overcome to make the region economically viable over the long term. “The biggest killer is the cost of doing business on the B.C. coast. Log costs, labour costs, environmental costs, now I’ve got a carbon tax. So the operating environment hasn’t been kind to coastal manufacturers, he says.”

“It’s a progression of changes in government policy in 25 years that has continued to erode the bottom line of the companies,” de Visser explains. “If you sit back and take a snapshot today at what’s left, that’s because there are places where you can put your capital and get a better return without having to pull out all the stops and drive people as hard as we do.”

Small logs and pioneering technology
Coastland Wood’s success is all about the little log. Logs come to the site by boom (50 per cent) or truck with log-handling on-site. Once debarked, the logs are treated in hot water ponds for 12 hours before being sent down one of the peeler lines.

The first two lathes, made by Coe, use North American technology. The newest lathe is by Japanese manufacturer, Meinan – available in North America through Merritt Machinery. The machines use two distinct types of technology and process, but for all three lathes, the logs are cut into eight-foot lengths, fed into the machine and sheets of veneer come screaming down the line. Perfect little posts are leftover; deposited under the machine to be sold for landscaping.

The Japanese lathe adds a number of advantages over the older machines; the logs don’t need to be treated before peeling on the Meinan lathe and the machine requires less maintenance and has a much lighter energy footprint. The North American lathes use 500 horsepower electric motors while the Japanese ones are only 75hp.

“North American lathes drive the log from the centre, while the Japanese lathe drives it from the spindle only until the log is smooth. Then there’s all these little wheels on the circumference that rotate the log so the peeling force lines up perfectly with the resistance of the knife,” de Visser explains. “And so that gives you the tolerance, reduces flexing but it also uses less energy.” And the veneer it produces is far superior – even to the untrained eye.

Cost reduction
Even though the Japanese lathe is energy efficient, Coastland requires plenty of energy to power the other two lathes and to heat the water before sending logs down the lines. In 2006, the company spent $6 million to put in a thermal oil energy system made by Wellons Canada. It runs on hog to make hot oil that goes through a heat exchanger to heat the water. The plant used to burn $150,000/month in natural gas, but has now managed to turn off that natural gas tap.

“Because we’re in the city limits, we had a lot of trouble getting a permit to burn wood. We need to adhere to the highest standards that exist in North America in emissions for burning wood, de Visser says.”

Besides requiring less energy than the older lathes, the new lathe only requires two people to run it - while the other two require four or five people - and that keeps labour costs down while raising productivity. “The average person working around here makes about 60-$70,000/year with a grade 12 education,” de Visser says of his 147 full-time employees, who work four 10-hour shifts a week. “And you have, for the wood business, unparalleled security of regularity of work because we never take downtime,” he says.

Unlike many of the sawmills on the coast, Coastland didn’t miss a beat even through the recession. “We’ve been sold-out throughout the entire downturn. Nobody took any time off.”

For Parcher, however, the company’s recruiting advantage spins from its green credentials. “We’ve peeled logs in this mill as young as 35 years old,” the 38- year-old log supply manager says. “We’re not trying to survive on something that won’t exist in the future, like old growth. And we don’t use any chemicals in our process.”

Parcher continues, “There’s no such thing as waste as far as Coastland’s concerned. Our cores are sold, our chips are sold; we don’t have a waste product. One of the businesses our cores are going to is organic wineries because we don’t have chemicals in our process.”

It’s worth raising a glass to a sustainable business, but the plant’s success hinges on a political policy its president suspects is veering off-kilter. 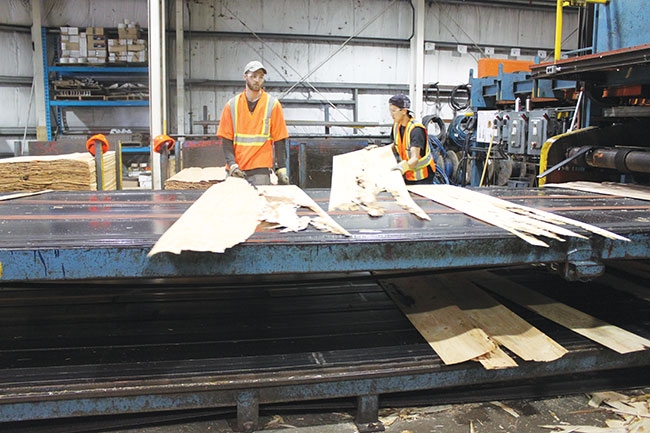 Vancouver Island is a great place to live Logging companies on the coast of B.C. may find export regulations unfair and cumbersome
Print this page