July 12, 2017 - Engineering researchers are putting an innovative two-storey structure made of cross-laminated timber panels through a series of seismic tests to determine how it would perform in an earthquake. 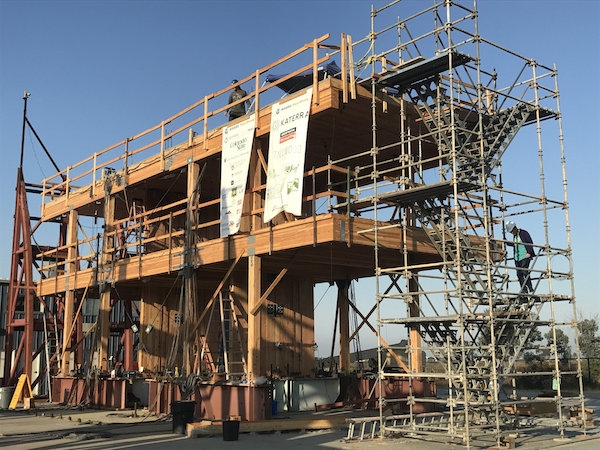 Constructed with cross-laminated timber panels and a "rocking wall system

The tests are being conducted at the Natural Hazards Engineering Research Infrastructure at University of California San Diego (NEHRI@UCSD) site, which is funded by the National Science Foundation (NSF). They will produce data that can be used in the design of a new generation of wood-frame high-rises, such as a four-storey parking structure designed for Springfield, Ore., and a 12-storey Framework building in Portland. Scheduled to open in 2018, the 90,000-square-foot framework structure will be the tallest mass-timber building in the United States.

A consortium of universities, agencies and engineering firms is conducting the tests with funding from the NSF, Katerra, Simpson Strong-Tie, Tallwood Design Institute, DR Johnson Lumber Co., the Forest Products Laboratory, City of Springfield, the Softwood Lumber Board and MyTiCon Timber Connectors.

“The overarching goal of the project is to propose a design methodology for seismic loading for large panels subjected to large in-plane loading, including some consisting of a composite made of concrete and cross-laminated timber (CLT),” said Arijit Sinha, associate professor of renewable materials in the College of Forestry at Oregon State University.

“Several tests will be conducted at different shaking intensities,” said Andre Barbosa, assistant professor of structural engineering in the College of Engineering at Oregon State. “The three different phases of testing include designs for locations in San Francisco, Seattle and Berkeley.”

Barbosa, Sinha and Christopher Higgins, professor of structural engineering in the OSU College of Engineering, are leading the test of the building’s horizontal elements. The three researchers are affiliated with the Tallwood Design Institute at Oregon State, a collaboration between OSU and the University of Oregon.

The tests reflect a range of stresses associated with a variety of earthquake and wind conditions. “Just for reference, the shake-table motions on one of the tests are calibrated to what is expected to occur in a magnitude 9.0 subduction earthquake zone event in Seattle,” Barbosa added.

Researchers will collect data through more than 300 channels in three phases of testing on the 22-foot-tall structure. Data will be generated at pre-selected points to measure how the CLT panels bend and how the panels move relative to each other. Researchers are particularly interested in a system that allows the building to rock in response to an earthquake and how the walls and floors interact during shaking.

In a so-called “rocking wall system,” vertical walls are connected to a steel footing by post-tensioned rods that run up next to a CLT wall and special U-shaped brackets on the side of the wall. The rods allow the wall to rock during an earthquake and snap back into its original upright position, minimizing the impact and resulting structural damage.

Researchers plan to evaluate larger buildings in the future, including a 10-storey tall CLT structure by 2020.

Ongoing activity at the outdoor shake-table of the Natural Hazards Engineering Research Infrastructure facility is live-streamed by webcam at nheri.ucsd.edu/video/