Experienced decision-making and working with people who have a stake in the outcome is the only way logging makes sense to Jamie Enright, co-owner of M.J. Enright and Sons Logging Inc. of Mount St. Patrick, Ontario. 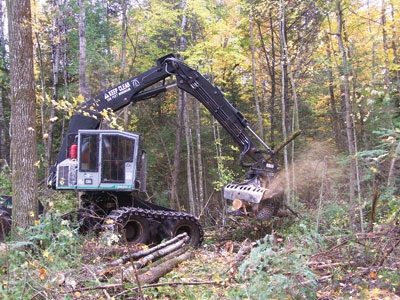 Enright has happily spent his whole life in the bush. After graduating from the forestry technician program at a local college in 1982, he worked on fire crews in Northern Ontario in the summers and cut pulp wood in the winter for Great Lakes Pulp & Paper. “I decided to start my own business in 1985, and worked for Martin Lumber, Tembec and Commonwealth Plywood,” he remembers. “I also worked for Opeongo Forest Service (OFS), a family-owned business that owns a lot of land in this region (about two hours northwest of Ottawa), and I’ve continued to work for them to this day.” Enright also logs his own family’s land and that of some other individuals in the area.

For the first 20 years or so, Enright used a cable skidder and felled trees by hand. The company also owned a couple of logging trucks at that time, but hires out the log transportation nowadays. In 2003, there weren’t many experienced people available to do bush work, so Enright found himself working alone for about two years. “There was no cell service and safety was a concern, especially with my wife, Shawnalee,” he smiles. “I then decided I had to mechanize, so I talked to OFS and they agreed it needed to be done. You can’t cut out the junk and properly manage the forest fast enough by hand to make money.” 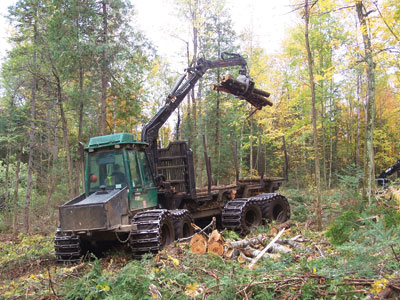 The company bought a Timberjack 1210-B eight-wheel forwarder and a TimberPro 620 harvester with a Risley Rolly-II processing head. “The Rolly-II did all the falling and processing for a few years. Then in 2008, we took advantage of low equipment prices and bought a good used Timberjack 608 feller-buncher.” The buncher falls and pre-sorts the trees, so the Rolly-II can dedicate 100% of its time to processing the stems. This approach has greatly increased production.

Selective Logging on Private land
The company is currently logging on four privately owned adjoining properties, one of which belongs to OFS. “I approached the other land owners because it needed to be a large area to make it worthwhile for us financially due to the large road costs,” Enright says. “They needed their woodlots managed anyway, and now they have good access roads for hunting. It’s a win-win for everyone.”

The forest in the area consists of a mixed bag of many species and hilly terrain. “Forty years ago, when this bush was last logged, there was no pulp market, so they cut the hardwood and better pine,” Enright observes. “We are now basically doing the opposite. Almost everything we take out is of poor quality or dying. You leave the best and a lot of the time, you’re leaving the best of the worst.” Most of the hardwood (yellow birch, maple, ash, basswood) and the larger pine are left standing. With the poor trees and brush gone, the remaining trees grow more quickly, and pine have a better chance of seeding in. “These properties can be logged again in 20 years,” Enright notes. “The landowners appreciate that.”

Enright believes fast-paced selective logging is the only way to make a living in this type of bush, and purchased the company’s equipment line-up accordingly. The feller buncher (operated by OFS co-owner Leo Hall) works about twice as fast as the processor, so Hall works four hours for Enright’s every eight hours. Hall therefore spends time every day doing other things, such as checking property lines. The forwarder, run by Enright’s uncle, Jack Frost, picks up small piles of logs and takes them to larger piles at the side of the road. Enright says this is the best way to do things for several reasons. “Skidding tree-lengths to a landing would damage the selected trees left standing and, this way, the logs also stay clean, which everyone likes,” he notes. No large one-acre landing site is needed for processing and landowners are happy to avoid big clearings.

“It’s either me or Leo making decisions about what to cut and what to leave, and they’re almost always the right ones,” Enright notes. “Most of the bush we cut has so little value, it makes no sense to waste time and paint-mark the brush.”

He also believes strongly that this good decision-making, while partly a matter of  experience, is also very much dependent on the fact that both he and Hall have a personal stake in the success of the business. “We’re working on Leo’s family’s land and his neighbours’ land, and Leo’s company is a shareholder in my company,” says Enright. “I wouldn’t want anyone without ‘skin in the game’ making decisions. If I didn’t have Leo or someone else I trust as much working with me, I’d have to mark trees for the feller-buncher operator and that would be a losing proposition.” Enright also has a strong appreciation for his uncle’s abilities and Shawnalee’s management of the office and all the company’s bookwork. “We are all in this together,” he says. “We all have a personal connection and that’s what makes it work.”

Long Days
Enright works a 12-hour day that includes about two hours of driving time. In addition, he sometimes does maintenance work during the evenings and weekends. “We do all the maintenance ourselves, except occasionally we need someone for specialty welding or fixing something like an injector pump or reading computerized systems,” he says. “I use Petro-Canada’s HYDREX MV 36 hydraulic fluid in all my machines year-round, which saves time. It’s designed for operation in wide temperature extremes.” Enright has over 10,500 hours on the processor and has never had to touch the pumps. He also uses PetroCan’s synthetic grease and gear oil, but adds that “of course, l use used oil or the cheapest oils out there for chain greasing.”

Road building and trucking is hired out and the operation only stops for about three weeks in April with the spring thaw. In terms of restrictions relating to logging private land in that area of Ontario, Hall and Enright look out for butternut, ginseng and endangered bird and turtle species. “Butternut can’t be cut because there’s a canker killing them all off,” Enright says. “The scientists are trying to find trees that are resistant to the disease.”

The company sporadically ships spruce and balsam for chip wood, and some hardwood goes for fire wood. Most of the fibre, however (poplar, some hardwood and some softwood), goes to the only pulp mill still open in the area, a plant owned by Fortress Paper and located several hours away in Thurso, Que. “The other pulp plants and the medium density fibreboard plant in Pembroke have all closed,” says Enright. “If we didn’t have a market for pulp wood, we couldn’t clean out the junk and manage the stands properly. If Thurso closes, we’re in real trouble. The selective logging we do is like weeding a garden, but you have to have somewhere to sell the weeds.” 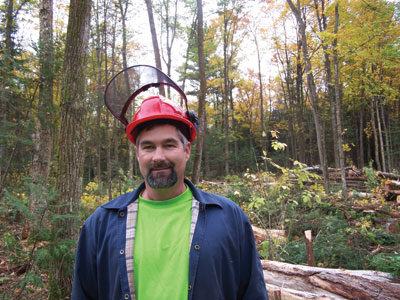 Enright would like to see Crown land extensively logged in his fashion (intermittent thinnings) for pulp, firewood, chipboard – and large-scale electricity generation. He believes there would be a bright future in logging in Ontario if the provincial government would embrace the idea of wood fibre as energy. He says small biomass electricity plants and/or district heating plants could be built throughout the province – in and around communities close to where the forest resource is located so that transportation costs would be minimized. “If we selectively logged Crown land the way [my company does] it, we could help get the province out of debt, employ lots of people and manage the bush effectively,” he says. “Biomass electricity is cheaper than solar or wind, and going this way would create the markets we need to have, in order to keep this big garden weeded.”