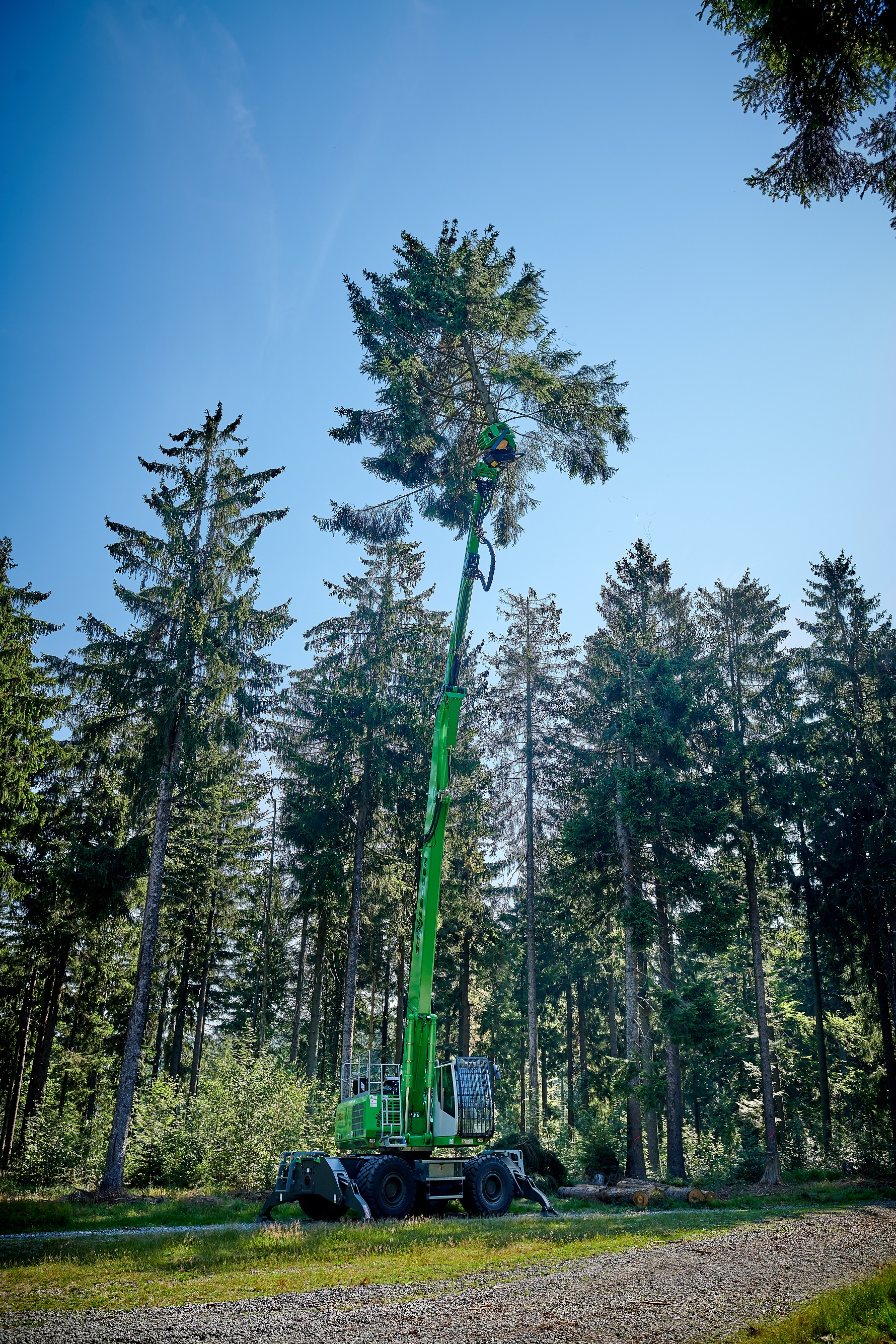 A great idea just got bigger! Sennebogen has been making a big impact in the arboriculture industry with its remarkable 718 M purpose-built tree care handler. Described as a “game-changer” by tree care specialists, the 718 is reported by users to achieve up to 10-fold increases in production in applications from thinning urban woodlots to roadside maintenance.

Now, Sennebogen introduces the 738 M. It is fitted with same type of equipment but sized to reach further and to handle larger trees.

Weighing in over 95,000 lbs., the new Sennebogen 738 M is twice the size of the 718 and extends its reach to 75 feet versus the 43-foot range of the 718. Still, according to operator Rob Frost, the 738 handles like its smaller predecessor. At a recent field trial, Frost said, “The 738 gives you the same cycle times, the same fluidity; it’s quick and smooth. You can move at the same pace as the 718, while you’re moving much bigger wood.”

Sennebogen says the 738’s larger size effectively expands the practical range for its purpose-built tree-care machines. While it allows crews in urban eastern areas to take on more and larger projects, the 738 is also sized right for heavier forested areas in Pacific and mountain regions. Intended specifically for arborists, rather than logging production, the 738 is also recommended for deeper off-road projects such as right-of-way maintenance for utility companies or for DOT throughways and rail lines.

Frost reports that, while he takes on 90-foot trees with his 718, he can handle 125-foot trees up to four-foot diameter with the 738 or even larger depending on the species. Using a 0.47 yard grapple saw at the demonstration site, he took down an 85-foot spruce in just two pieces, then quickly cut and stacked it into four 20-foot logs.

He estimates that the 738 works fast enough to cut in the range of 100 to 150 trees per day, with no additional crew onsite. With its long reach, the machine can clear large swaths from one stance then, running on rubber tires at up to 13 – 15 mph, it can easily move up the road to clear the next spot.

Developed on the same platform as Sennebogen’s trailer-pulling 830 M-T log handler, the 738 M offers powerful off-road mobility driven by with transmission on both axles. The machine is powered by a 225-hp Cummins 6.7 Tier 4F engine. The operator gets a clear view of the worksite and into the cutting zone from the elevating and tilting Maxcab.

The 738 shows off even greater single-handed versatility with its auxiliary attachment pump, provided to power heavy hydraulic attachments such as a mower and mulcher. The total package offers exceptional capacity for maintaining embankments, with the ability to stand back safely while it works down a 25-foot slope.