Using a full laser line to generate grey scale imaging and differential measurements of both edges, the new system allows the detection of rot/decay and never before achieved width measurement precision.

According to VAB, the new trimmer scanner technology has the best accuracy in the industry using more than 20 differential measurements on edges, allowing edge and width measurement accuracy of +/-0.005’’. It also features high reading density, by scanning the boards under a continuous laser line instead of only laser dots, allowing scan density to be adjusted as low as 1/16” if needed.

The trimmer scanner has less components than previous models, reducing cost and the need for future maintenance.

VAB had previously installed a linear planer optimizer at Sexton Lumber in Bloomfield, Nfld. when the company built a new planer/trimmer system at its mill in early 2010. The new system also included a Carbotech-VAB wane-up system that replaced a manual turning system.

According to Sexton Lumber President Kevin Sexton, the installation will be preceded by the addition of a new positioning system. “The current system we have can’t accept the information from the new trimmer scanner system, so we will be updating that first.”

Sexton also mentioned that the company is finalizing details for anew finger-jointing line, which the company expects to install sometime this summer.

The new trimmer scanner technology will be installed at Sexton Lumber in the coming weeks. 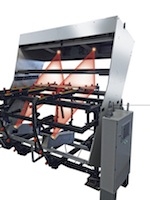