It was only a matter of time until the use of logging roads across Canada – and the use of forested areas themselves – became much more communal than it has been at any point in history. Dustin Meierhoffer confirms that recreational use of “resource roads” in B.C., for example, has definitely increased. (Note that the term “resource roads” is now replacing “logging roads” or “forest access roads” across the country.)

“In addition, industrial activities have increased,” says Meierhoffer, who is the director of transportation at the B.C. Forest Safety Council (BCFSC), “which has resulted in road traffic involving different types of industrial users with varying resource road use experience.”

Indeed, sectors such as petroleum, mining or commercial recreation now require more access to forested areas than they ever have before, and increased traffic on resource roads has been identified as a significant factor in B.C. forest sector trucking accident and fatality rates. Add to this the fact that resource roads and bridges are now being travelled by industrial vehicles they were never designed to accommodate.

This increased use of resource roads is also taking place on a large scale. On its website, the BCFSC pegs the “resource roads network” of B.C. at over 400,000 km, a web that includes roads of various ages, designs, widths and materials. Only some of these roads, the Council states, have prescribed construction standards or maintenance requirements. The BCFSC also notes that forestry companies that hold the road permit are not required to maintain the road if they’re not actively operating on that road. And due to the economic downturn, the forest sector and some other sector activity has diminished, leading to an increase in abandoned roads.

“The old system of having forestry companies with the full responsibility as permit-holders of resource roads is moving to a new paradigm, where different roads will likely be the responsibility of different resource users, depending on who is the primary user,” says Doug Routledge, vice president of the Council of Forest Industries (COFI) in B.C. “Over the last few years the Ministry of Forests, Lands and Natural Resource Operations (MFLNRO) and its previous iterations has been engaging stakeholders from various industries and recreational groups on the creation of a new Act related to resource roads.” Routledge says the new Act and its associated regulations are expected to be ready in 2016, but some measures – especially safety measures – will likely be adopted as common practice before then. For example, there will still be a “road permit” for the builder/maintainer of the road and “road user” permits for other industry and business operators, but all users will have their rights and responsibilities better spelled out than in the past.

A look at the Act
Routledge identifies two main areas of concern that the Act will address, the first being safety. “The resource road system in B.C. far exceeds public highways in distance, and we have the full spectrum from larger roads to trails, and from large resource companies to small businesses holding road permits,” he says. “All of the groups involved in providing input to the new Act think that both industry and public safety would be best addressed by keeping one set of rules for all roads – public highways, city streets, resource roads. That is, they think the idea that everyone uses the same traffic laws and signage and so on, no matter what road they’re on, is the safest course.”

The second concern Routledge identifies is accommodation of competing uses. “The first step to have effective road maintenance is to identify the primary intended use of the road in question,” he says. “The permit is assigned from there, whether it’s a small club or big company.” This is not to say that the permit holder will not change over time. For example, if a mine closes or the log harvest in an area is complete, the road permit could be assumed by the next most intensive user of that road, with a new maintenance standard established that’s in keeping with the new primary intended use.

The number and type of “road user” permits will also change over time. “Maybe at some point, a road only needs to be maintained for four-wheel drive vehicles belonging to a commercial hunting operation,” Routledge says. “Whatever the case, whoever holds the main permit for a road should be informed of each user permit that’s issued, so that everyone is aware of their respective rights and responsibilities and who else is using that road.”

With regard to gaining a more useful picture of resource road safety, both Meirhoffer and Associate program leader of road engineering at FPInnovations Allan Bradley believe a comprehensive database should be created that tracks the number and types of accidents that might occur on resource roads in B.C. Bradley says that information related to accidents is neither consistent nor complete. “The agencies that are collecting data are doing so for their own specific purposes, and they gather only the data that supports their needs,” he explains. For example, the Insurance Corp of B.C. collects data to determine liability and support statistical analysis; the RCMP collect data to lay charges when appropriate; the BCFSC is creating a database of crash information.

The resource road use analysis is supported by some FPInnovations’ member companies in western Canada. Bradley says the analysis was actually originally requested by MFLNRO, and two years ago the Canadian Forest Service became interested and provided funding. “At present, we are conducting field trials in B.C. and Alberta to learn about heavy resource road traffic patterns and interactions,” he says. “We are also starting to learn how to model resource road traffic flows.”

Bradley notes that in Alberta, the company that constructs a resource road maintains it and charges maintenance and upgrade fees to other users. “There is a lot of road sharing [between industries in Alberta] and co-operation between companies using each other’s roads,” he says. But that doesn’t mean issues don’t arise, and Bradley thinks this is possibly because of cultural differences between industries. “For example, forest company-built roads tend to be of a lower standard than oil and gas roads, and oil and gas development is faced with large numbers of sub-contractors coming in waves and not always paying road use fees or strictly adhering to road safety rules,” he says.

In the Maritimes
The Maritimes represents a different resource road use picture compared to that of Western and Central Canada because land ownership in that region is largely private. Nova Scotia, for example, is 70 per cent private land and 30 per cent Crown, says Andrew Fedora, sustainability and outreach leader at Port Hawkesbury Paper in Port Hawkesbury, N.S. By default, the majority of resource development takes place on private lands, he says, adding that, as in other areas in Canada, roads in forested areas of Nova Scotia are multi-use. “You will find restrictions in areas where there are recurring issues such as vandalism, property damage and timber theft, but for the most part, Nova Scotia takes an open and inclusive approach to the use of resource roads,” Fedora explains. “In many cases it can actually work to the landowner’s advantage. Many companies are willing to repair and improve private woodlot roads in exchange for usage rights or easements.”

With regard to road upkeep, Fedora says aside from legislation and regulations relating to issues such as wetlands and species-at-risk, private landowners in Nova Scotia enjoy a high degree of autonomy. “There are specifications to which resource roads should be built, but private landowners are only required to follow them when applying for road-building funding assistance,” he notes. Resource road development on Crown land in Nova Scotia follows a much more stringent set of guidelines. Fedora says anyone interested in extracting resources from Crown land must not only adhere to regulations, but must also follow best management and special management practices.

Those seeking recreational access to private land are usually accommodated by most landowners. “As a landowner, you may be held liable for damage occurring on your land; however, given Nova Scotia’s culture, most landowners are willing to accept the risk and most land users are not likely to sue for damages.”

Education paramount
It is well known that one of the most critical aspects to safety in any environment is education, and the resource road environment is certainly no exception. Meierhoffer at the BCFSC and many others feel that, going forward, the public requires better resources and information relating to access and safe use of resource roads.

“We are moving in that direction, but much more education is needed,” Routledge notes. “That includes educating people on the fact that things will change over time, and they may have to hike to that lake they really like someday because the road to it may not be maintained at that point in time.” 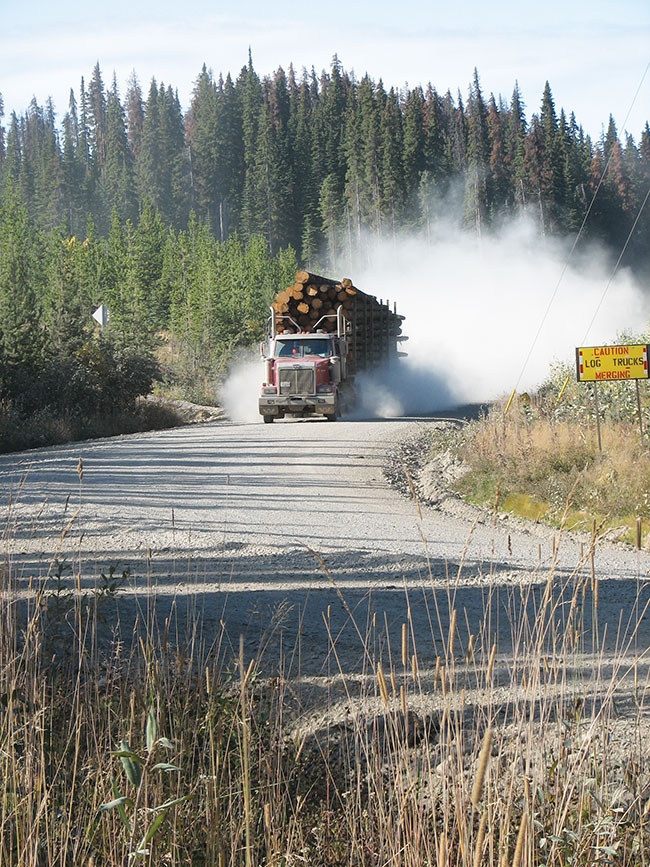