Jason Madden has experienced the ups and downs of the forest industry first hand. The coastal British Columbia-based owner of Tymatt Contracting Ltd. has seen his annual harvesting volumes go from an average of close to one million cubic metres per year, and a high of almost two million cubic metres annually at his peak, to a yearly harvest of 240,000 cubic metres today. 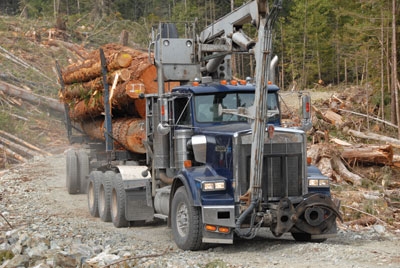 Jason Madden has experienced the ups and downs of the forest industry first hand. The coastal British Columbia-based owner of Tymatt Contracting Ltd. has seen his annual harvesting volumes go from an average of close to one million cubic metres per year

For any logger, dropping that much in harvest volumes would be challenging, and Madden is the first to admit that this has been a tough road to go down. However, he takes it all in his stride and confesses, “when this is done, it will be a good thing for us,” while adding, “timing is everything in this business.”
He also says he wouldn’t want to go back to the large volumes he was doing a few years ago. “I wouldn’t want to do that again,” he concedes when talking about his banner year of 1,980,000 cubic metres. “I wouldn’t even want to go back to one million cubic metres per year,” he adds, noting that the reduction in his harvesting volumes and the streamlining of his business was “a lifestyle decision” as well as a good business move.

“I wanted to spend more time with my wife and kids and I wanted to run a smaller operation where I can be much more hands on,” Madden explains. “My goal is to get back out into the woods on a daily basis, get on the equipment, and work closer with our employees.”

Surviving the Transition
So how do you shave 75% off your annual harvest and survive? For Madden, a big part of the success in reducing his volumes has been patience and timing. He didn’t jump ship when B.C.’s coastal logging business hit rock bottom, waiting for signs of an upturn before selling two of his largest Vancouver Island falling contracts to another B.C. logger.

“I was approached by Pat and Troy Young about the two Vancouver Island contracts and after a lengthy process and some heavy negotiating, Troy, who owns Rhen Enterprises, purchased the contracts and they are running them today, along with other operations in the interior of the province. Throughout the process, I got to know Pat really well and I enjoy working with him and Troy.” 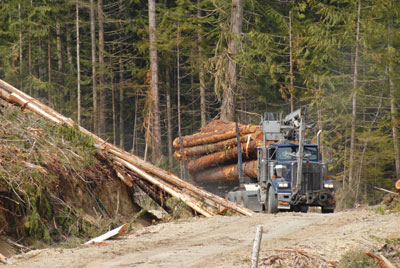 Once that deal closed in 2010, Madden and his family moved from Campbell River on Vancouver Island to his new base in Powell River, which is situated on the coast of B.C.’s mainland. Powell River isn’t new to Madden, as both he and his wife Lori, grew up in the town, which has a long history in the timber business and is home to about 20,000 people.

Even while working on Vancouver Island, Madden spent quite a bit of his time in the Powell River area, working for a longtime customer – Olympic Forest Products.  “We have had a falling contract with Olympic for 14 years,” he says. “So this is like going full circle. We started our business with them and we have maintained a great working relationship with them over the years, so we are very focused on Olympic’s needs. In addition, we work for Western Forest Products and Island Timberlands, and we are also picking up some smaller contracts for other companies in the area for both ground work and high lead logging.”

Equipment
Another major challenge for Madden was reducing his equipment inventory to match his new harvest volumes, and once again, patience and timing were critical. “Once we made the decision to reduce our volumes and move to Powell River, we needed to sell 25 pieces of large equipment, 80 pickups and 16 logging trucks, but we didn’t want to give them away for a fraction of their value,” Madden says. “We had a lot of help in this area from Tim Lloyd of ForesTech Equipment Ltd., which is a used equipment dealer here in B.C. We still have some equipment left to sell, but we were able to sell most of it when things started to pick up again and there was a demand for used equipment. A lot of the new equipment dealers don’t have the inventory levels they used to have and that has certainly helped us when it comes to selling our used gear.”

Today, Madden says they work with a streamlined fleet of iron that is ideally suited for the steep terrain and conditions they are dealing with on the B.C. coast. That includes: two Tigercat 870 feller bunchers with Tigercat 5702 bunching heads, four Caterpillar 330 carriers and a John Deere 330, all equipped with Waratah 626 processing heads that are less than four years old; a Caterpillar 545 skidder and a Tigercat 630 skidder; six Kenworth tridem tridem configuration log trucks and one Western Star tridem tridem self loading log truck; and two Western Star trucks with low bed trailers for transporting equipment. An older Pacific truck is also used for moving equipment and for the really steep slopes, Madden says they have a Madill 122 grapple yarder that comes out as needed. 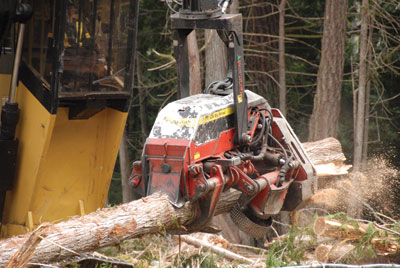 To keep everything running, Tymatt has two mobile mechanics on staff and a yard in town where they can bring equipment in for larger repair and maintenance jobs. Down the road, Madden says they will be setting up a shop in Powell River. “We really miss the shop that we had on Vancouver Island,” he laments. “We were hauling logs past it every day so it was easy to get parts out to the bush and to stay on top of things. One thing we have learned here in Powell River is that we have to be prepared for everything. Our logging blocks are much more remote and in some cases we are going into the block by boat. You can’t just get on the radio and have what you need in a couple of hours and that, along with logistics, has been our biggest challenge.”

The Right Team
In terms of employees, Madden says they are targeting a 20- to 22-man crew. That’s a big drop from the 365 employees and subcontractors Tymatt had at its peak, many of whom went to work for the logging companies that purchased Tymatt’s Vancouver Island contracts. “As a smaller company, you have to learn how to do things differently,” he explains. “On Vancouver Island, I had a general manager under me and then six supervisors working for him. Now, it’s just me and a few key guys under me. Our goal is to take what we have learned and be the most successful contractor we can be at our smaller size. As we start into the upswing, we want to be lean so that we can handle the opportunities that come up. We want to target the work that is right for us and where we can make a profit, and we don’t want to just chase jobs so that we can make cash flow.”

For Madden, having the right crew is critical to his success. “Being more involved with the day-to-day operations has given me the chance to work closely with my key guys,” he says. “Jeff Alexander is working with me on supervision and our stump to dump operations, Trevor Herron is working with our hand falling and bucking crews, especially on safety and quality control, and Eric Gaudreau is handling maintenance and mechanical harvesting. Eric worked with us for almost 10 years on the Island, but moved back to Powell River in 2007, so we were happy to get him back when we moved the bulk of our operations over here. We have a great team and a really good group of machine operators and hand fallers right now, and that is helping us meet our goals.”

Positioning his company at the right size seems to agree with Madden as he heads through the local Timmy’s drive through to pick up a coffee for a 30-minute drive to a logging block near Lund, B.C., which is essentially the end of the paved road on the B.C. central coast. He says he is much more relaxed and at the end of the day is working far fewer hours than when he was running the big shows. “But it’s not just about my lifestyle,” he proclaims. “Having a smaller company is really allowing me to have a smaller group of employees that I can be part of. It’s just a great work environment, and I would sooner be tied to the seat of a buncher than a seat at a desk. As a company, it’s just where we want to be right now.”

Madden says there is still work to be done. “It’s a work in progress and it will take some time for us to fine tune our operations. Fortunately, we have some great customers and they have been very patient with us and supportive of what we are doing,” he explains, while noting that he hopes to be fully transitioned by the end of this year.