June 21, 2016 - Many arguments have been made over the years pertaining to what to do with slash piles leftover from logging operations. Sometimes the leftover forest residuals can be used for various biomass operations, if the contractor can make the logistics work in a way that is profitable to their business. But often times, the slash piles are left to rot in the forests where they are harvested, leaving potential fire hazards and wasted energy. 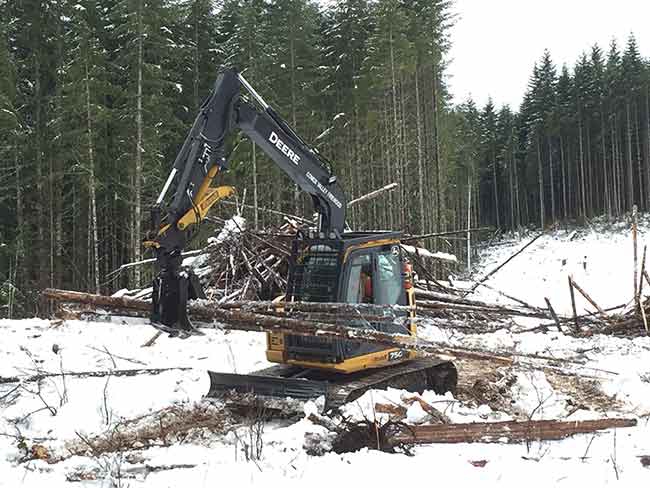 Francoeur purchased a John Deere 75G excavator with a Robotec grapple for his salvage operation. Many arguments have been made over the years pertaining to what to do with slash piles leftover from logging operations.

But Daniel Francoeur and his wife, Chatrawee Sritip, have turned harvesting slash piles into a profitable venture on Vancouver Island. Francoeur scavenges the slash piles on TimberWest’s lands for useable wood that can be sold as firewood for their business, Comox Valley Firewood, while Sritip runs the bookkeeping and administrative side of the business.

“I came up with the idea four years ago,” Francoeur says. “But it took a long time to find the right channels and go through the right people to give me access to the wood.”

To get approval to process the slash piles on TimberWest’s lands, Francoeur had to get safe certified as part of his agreement to operate on the company’s lands. Al Tymchuk, owner of Busy B Forestry – a sub-contractor that provides security, wildfire management and environmental compliance services for TimberWest – helped Francoeur’s business meet all of the requirements laid out by TimberWest.

“Al Tymchuk is really the guy that opened the door for me to access the wood,” Francoeur says. “Al is the main guy that connected me with TimberWest and told me what’s required to work on their land, because TimberWest land is privately owned.”

Tymchuk manages a salvage program for TimberWest, and that’s how he ended up in contact with Francoeur.

“Daniel got in touch with us and said, ‘Besides other salvage programs, what about a contract that provides and fulfills all the needs [for private land] in terms of BC Forest Safety Council approvals and does a salvage cleanup by selling firewood to customers?’”

Francoeur had to jump through a lot of hurdles to get his certification.

“I’m doing it right,” Francoeur adds. “I had to get safe certified, my employees are safe, and the wood is being obtained in a legal and responsible way. There are a lot of rules to follow.”

Francoeur is no stranger to earning a living selling firewood. For 11 years he bought it from sawmills and other businesses and resold it.

Francoeur purchased a John Deere 75G excavator with a Robotec grapple for his salvage operation.

Getting the gear
Francoeur knew he would need to purchase a machine that could process the slash piles and harvest the firewood in an efficient manner, so he contacted Craig Strachan, territory manager for Brandt Tractor.

“I chose to go with a new machine that has a small impact on the land,” Francoeur says. “It has minimal disturbance for reforestation.”

The business has been processing slash piles since the fall of 2015 and has not yet received any complaints related to the operation of the machine.

Although the profits gained from Comox Valley Firewood’s business are relatively small for TimberWest, the positive feedback it receives from the salvaging efforts make the venture well worth undertaking.

“But by allowing Comox Valley Firewood to go out and provide firewood for the community it helps their relationship big time,” Francoeur says. “It’s not about the money for them.”