March 30, 2017 - Timber harvesting on steep slopes is not new to British Columbia. About a quarter of the annual allowable cut is on slopes greater than 35 per cent. Coastal loggers have been experts in cable logging for decades. In the Interior, various innovative steep slope systems and techniques were tried such as high-track Cat 527s, Timbco tilting feller bunchers, KMC soft-track skidders and trail building. Expensive steep slope logging nearly disappeared in the Interior when the economy tightened in 2008. 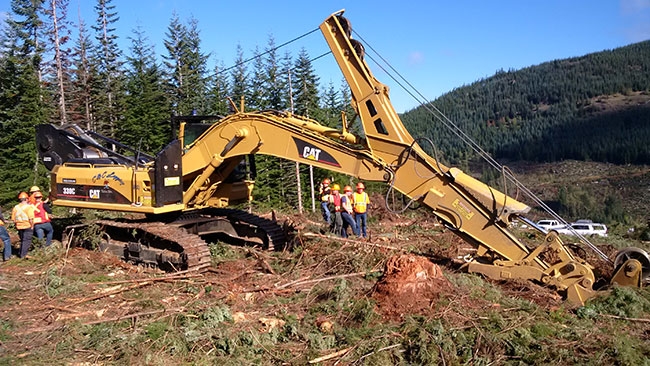 An EMS excavator-based Timber harvesting on steep slopes is not new to British Columbia.

Then, the harvest profile changed. The proportion of old growth decreased and the piece size of second growth started declining on the coast. For several years, Interior harvesting was focused on mountain pine beetle salvage, mainly on gentle terrain. Costly areas were avoided during the economic downturn following 2008. Equipment and skills left the industry during that time.

As the economy improved, loggers looked up the hill at the reservoir of wood and wondered how they would log steep terrain safely and cost effectively. In 2014, industry members approached FPInnovations asking for help with several steep slope challenges including cost reduction, safety, skilled labour, regulatory compliance, investment in new equipment, fibre supply and planning. FPInnovations launched the Steep Slope Initiative late in 2014 to address these challenges. A five-year road map was developed and steering committees were formed with industry and manufacturers. FPInnovations is engaging with several stakeholders both domestically and internationally to deliver safe and effective steep slope operating solutions.

While the Steep Slope Initiative is largely focused on the winch-assist technology, FPInnovations has performed considerable research in other steep slope-related activities such as road construction techniques, truck configurations, cable yarding, grapple cameras and electronic chokers. Workshops, presentations, reports, videos, and project developments are continuously updated through the website steepslopeinitiative.fpinnovations.ca. There is also a moderated LinkedIn group discussion at www.linkedin.com/groups/8499169.

The value proposition for steep slope harvesting research is compelling:

Tolko forester Ryan Potter visited New Zealand in 2012 and viewed a new, tethered harvesting technique with a winch integrated into the chassis of a feller buncher working on 100 per cent slopes. Once compliant with all regulatory requirements, the ClimbMAX started operation with Tolko in September 2013, becoming the first winch-assist machine in North America.

Interest in New Zealand steep slope logging surged as that country produced a wave of innovation. This was partly driven by high logging fatalities there in 2013. Hancock Forest Management (NZ) Ltd. decided that 80 per cent of its harvesting would be ground-based within two years. It built a collaborative approach with contractors to provide support for adoption of new technology. New Zealand contractors geared up with winch-assist machines and adapted to their Accepted Code of Practices (ACOP), which requires a second safety system. Twin cable systems such as the Remote Operated Bulldozer (ROB) and the EMS were developed for this requirement. The New Zealand slogan of “no man on the hill, no hand on the saw,” in addition to the development of innovative technology, helped reduce the number of fatalities to zero in 2014.

Much of the innovation emerged from the hamlet of Brightwater on the South Island of New Zealand. Ross Wood first tried tethering a feller buncher to a dozer-mounted winch in 2006. Nearby, Nigel Kelly and Trinder Engineering developed the ClimbMAX in 2007. Another neighbour, Dale Ewers, developed the Falcon Forestry Equipment (FFE) winch-assist system along with grapple carriages, grapple cameras, yarders, and other innovations. In 2015, there were eight different systems and 35 winch-assist machines operating in New Zealand.

Largely resulting from the insight provided by FPInnovations through its technology transfer activities, B.C. forest companies began urging their contractors to look at new winch-assist machines. Contractors were reluctant to invest because of the uncertainties around this new technology. However, traditional grapple yarding with small logs was becoming less appealing, and the safety benefits from mechanization were attractive.

The first ROB winch-assist machine started operating on Vancouver Island in June 2015. In October 2015, FPInnovations led a tour to Washington to view the EMS and winch-assist systems. Two weeks later, an order was placed for the EMS excavator-based, twin-cable winch-assist system for Vancouver Island. The new technology raised several questions: Which is better, an integrated winch attached to the cutting machine or a winch mounted on an anchor machine? What safety system is best? One cable or two? Tracked or wheeled carriers? Excavator or dozer anchor machine? These questions persist as more and more systems are adapted to western Canada.

European winch-assist systems received more attention with the arrival of a Swiss contractor importing a John Deere harvester and forwarder equipped with Haas winches in October 2015. Some regulatory requirements had to be addressed for the harvester to become compliant with B.C. regulations.

The Ponsse Synchrowinch was developed in 2004 and Europeans have been routinely harvesting with winch-assist methods for more than 10 years without any serious safety incidents. Their main interest in winching is to reduce soil disturbance and operate during wet conditions. The cut-to-length wheeled harvesters and forwarders are very stable and can operate on relatively steep slopes without winch-assist. The European safe work procedures rely on operator tests to stop in control with a slack cable at all times. The winch assists the machine to climb up steep grades, but the machine never relies on the cable for stability.

Other European systems include the HSM, T-Winch, and Komatsu. The German-made HSM and Austrian Eco-Forst’s T-Winch were shown at DEMO 2016 in Maple Ridge, B.C., in September 2016 along with the ROB, EMS, Haas, Ponsse, and FFE machines. The HSM grapple skidder and harvester were introduced in the Kootenay region of B.C. last summer. The fully remote-controlled T-Winch is currently operating in Alberta assisting a skidder. The FFE winch-assist system was also introduced in B.C. last summer. It is a single-cable excavator-based system and there are now two sets of machines operating with hot saws, or continuous rotation disc saws, in B.C.

The introduction of winch-assist systems in B.C. and the Pacific Northwest has been extremely rapid since 2015 when there were none. By the end of 2016, 10 different types of systems and close to 100 machines were operating or ordered in the Pacific Northwest region. In Western Canada alone, there were seven different types of systems and 49 machines.

The technology is still evolving and the rapid introduction of new equipment presents several challenges. Some adaption to western Canadian conditions is needed. Terrain is more broken and gullied with shallow soils, rock outcrops, and large stumps compared to other areas. Winters are cold with deep snow and frozen soils, and locations are remote. Operator training is an ongoing concern. Layout and planning for this new system has a steep learning curve and it is challenging to keep a steady diet of suitable wood and ground in front of this expensive equipment.

The New Zealand experience is instructive. Rowan Struthers, operations manager at Hancock Forest Management (NZ) Ltd., indicated that because of the high initial capital cost, there could be a two-year ramp-up period to achieve the increased productivity required for contractors and forest owners to be profitable. In June 2016, the first serious winch-assist accident occurred in New Zealand when a winch failed on an early dozer-mounted machine and the anchor machine was pulled off the hill. There have also been reports out of New Zealand of cables breaking, attachment points and couplings failing, and stumps being pulled out. Professor Rien Visser of the University of Canterbury has indicated that most of the cable failures occurred from loss of traction. His research has shown that spikes in cable tension have exceeded safe operating limits when machines start to move. Manufacturers have addressed this problem with software fixes. Visser has also reported high cable temperatures from rub tree friction, which could affect cable integrity.

There are no standards or regulations for winch-assist operations yet. ISO standards are in early stages and further science is needed to support the development of standards. WorkSafeBC is supportive of winch-assist harvesting as mechanization is a safer alternative to manual falling. If there are incidents and problems, regulations will be forthcoming. Meanwhile, it is important to ensure due diligence by implementing best practices that are detailed and current. FPInnovations is currently developing best practices documents for this new but exciting steep slope harvesting technology for western Canada.