April 22, 2016 - The recovery of the construction market in the U.S. is slower than expected, but it will materialize in the coming years, said Brendan Lowney, director of market analysis firm Forest Economic Advisor, during the Montreal Wood Convention, which took place from March 22 to 24 at the Queen Elizabeth Hotel. Lowney stated that the price of wood would increase to $450.

The youth population aged 25 to 34, who buy their first home, will soon reach the mark of 45 million people. It will, therefore, exceed the peak reached in the late 1980s, Lowney told the crowd.

Although many young people stay living at home with family for longer periods than previous generations, they also get married a little older and have their first child later. This cohort will eventually build new houses as the residential construction market recovers slowly, says Lowney. In addition, latent demand of nearly three million units accumulated during the recession.

The employment sector is also stronger and the amount of quality jobs has increased. Job creation has even filled the 11 million full-time jobs lost during the recession, Lowney told the crowd.

How these houses are built will make a huge impact on the amount of wood used, says Lowney.

After reaching a low point in 2015, lumber prices have increased slowly. With the increase in demand expected over the next few years, the factory operating rate should exceed 90 per cent, which will increase the price of wood even more. Ultimately, the price of wood products is expected to reach $450, Lowney said.

It remains to be seen what affect a new softwood lumber agreement will have on Canadian producers. 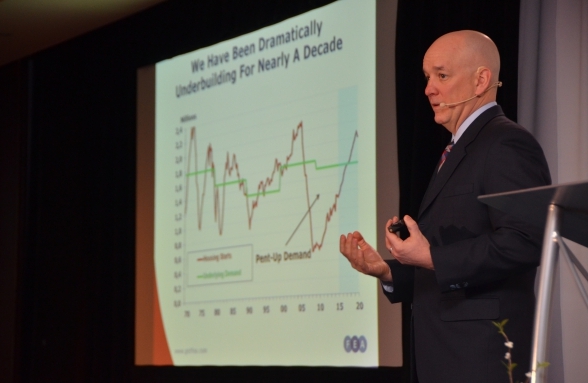