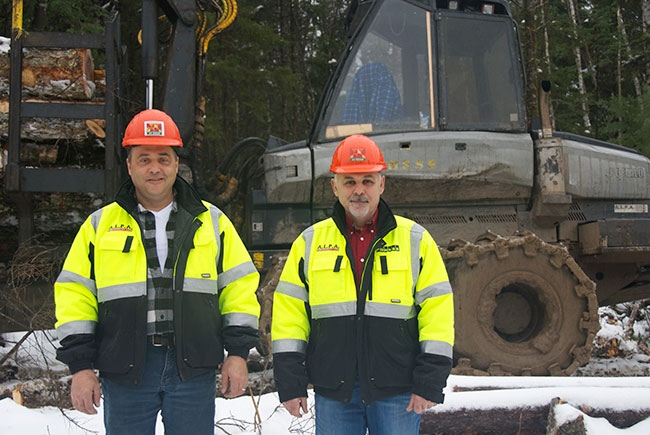 For the Plourde brothers in New Brunswick, small is the best model for them to efficiently run their contracting businesses. Richard and Michel Plourde divided the assets of their joint logging company, M&R Plourde, in 2016 to begin their own ventures.

With just one or two pieces of iron each and both employing just one or two operators, the contractors managed to bring in a combined 110,000 cubic metres in 2017 for AV Group NB — the owner of two dissolving pulp mills in New Brunswick.

Darrell Patton, operations manager for AV Group (AV) in New Brunswick, says the Plourdes’ ability to adapt to the most efficient system of the day is what makes them so valuable among AV’s 30 plus contractors.

“When I first came in under AV in 2013 the Plourdes were subcontractors. In my experience not everyone adapts well moving to a single-grip, cut-to-length system from a single-shift operation with an older grapple skidder/slasher system, so twice the equipment to cut half the wood they are cutting today. They had to start from scratch and it’s a big learning curve, but they are very open to change.” Patton says.

They harvest both hardwood and softwood in the cut blocks. The softwood heads to Twin Rivers dimension lumber mill in Plaster Rock, N.B., and hardwood to AV’s pulp mill in Nakawick, N.B.

“Some of the blocks we are cutting now have been previously harvested.  This can make it more difficult to achieve higher production,” Richard says.

They cut minimum four-inch stems, with an average of between eight and 10 inches. All harvesting is cut-to-length, processed at the stump and forwarded to roadside.

Family history
Michel and Richard had their start in the industry as youths working for their father’s logging business during summer break. After graduation they worked full time for various loggers and mills, and in January 2001 they went into the contracting business together under the name M&R Plourde.

“We had a Timberjack 230 cable skidder and we were buying private land and stumpage and in 2002 we bought our first harvester; it was a Case carrier 930 with a Quadco head,” Michel says.

From there the Plourdes began building up their equipment roster, adding a second harvester, a grapple skidder and a log loader as well as a log truck, all second-hand. In 2007 a third Plourde sibling, Jean-Guy, came to work for M&R as the first employee. Shortly after they hired another operator.

The Plourdes worked under this model with the same equipment until 2013 when they purchased their first new machines — a Landrich HC-310 and a Ponsse Buffalo forwarder, both from local dealer A.L.P.A. Equipment.

The brothers split in May 2016 to run their own contracting companies: Richard under the name R&C Plourde, and Michel under Plourde Logging. Michel’s sons, Matthew, Anthony and Isaac, all work for him in some capacity. Matthew and Anthony operate machines and Isaac files chains and bars. Richard employs Jean-Guy and is planning to add another forwarder and harvester to his complement.