Sept. 28, 2018 - Bigger is not always better. For John Drew, owner of Woodco sawmill in Barriere, B.C., keeping small and flexible has been his recipe for success during the ups and downs of the industry. 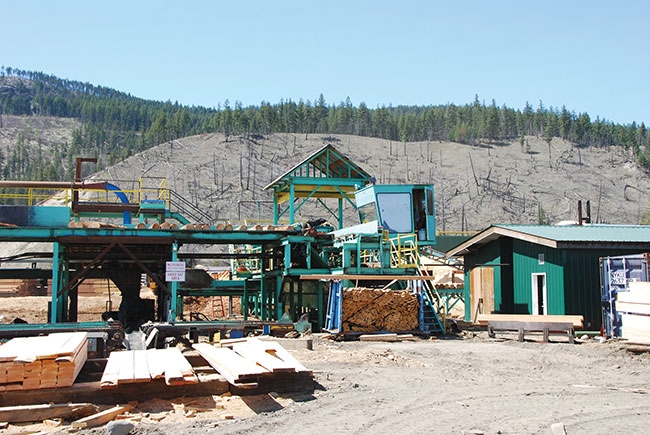 The Woodco site, a 45-minute drive north of Kamloops, comprises a large log yard that typically stores 20-30,000 cubic metres, two processing areas — a small log micromill sawmill and two horizontal bandmills — as well as a large packaging and shipping facility. Employing 20 people, Woodco fills a niche for wood products and species not typically milled by the big suppliers in the B.C. Interior.

“Our strength is that we’re small and nimble. We can pick small markets since we’re not tied into anything big. But that means we need to be on our feet, thinking and watching where the markets are,” Drew says.

A forester by trade, Drew launched Woodco in 2007 after receiving a salvage licence in 2004 for the burn area around Barriere, which was decimated by a fire the year before. The company was initially limited to acquisition, sorting and merchandizing of log products.

“I had a logging partner at this point and we were just going to log and sell the wood. But we needed a place to bring logs so people could view them,” Drew says. “We purchased the land and started to sell logs but that evolved to manufacturing products.”

In its current configuration with the sawmill and bandmills Woodco processes approximately 12 mmbf of hemlock, spruce and Doug fir a year.

Niche everything
Key to Woodco’s success is its niche position within the wood products sector. The mill produces only specialty products using relatively small-scale equipment, and the log supply side fulfils a demand in the industry for brokers to ensure the right products get to the right customers, including himself.

“We’ll do between one to three timber sales in a year, and we’ll contract that out. And then about 80 per cent of that wood I trade to the majors forest companies for a different log. It might have spruce and balsam and they want that, and I want fir back. There is a lot of trading to get the right log,” Drew says.

Log processing on site is divided up into two facilities — a small log sawmill and a bandmill.

The bandmill is six-inch double cut Select Sawmill horizontal bandmills with inline edgers. The bandmills handle the larger logs from 12 to 38 inches and up to 24-foot lengths. Logs first pass through a Rosser Head debarker. First cut slabs and side cuts of the edger are fed to a slab chipper and pulp chips produced.  Debarked hog and fines from the debarking process are mixed and sold as hog.

Less than a stone’s throw away from the bandmill facility, a Micromill Systems small log canter sawmill processes logs less than 12-inch butt and 8- to 12-foot lengths into 4x4s, 4x6s, 6x6s and 6x8s. The end products are sold to treating facilities for various industrial and commercial uses as well as fencing, pallet stock and roof strapping.

The small logs are pre-manufactured by length and diameters and them milled in runs. Logs run through an 18-inch Cambio ring debarker before heading to the Micromill compact four-headed chipping canter that feeds into a double arbour breakdown saw.

A mobile unit, the Micromill resides outside without a roof. “It was originally designed to be a portable system you could take into the bush. Originally we were thinking we would do it that way, but then we got established here and added a debarker and front-end infeed and designed our own outfeeds — so we like to call it our Micromill Plus, because we’ve really turned it into quite a different machine through our own knowledge of it and how to make it better,” Drew says.

A unique in-house addition to the line is a system that continually sprays water on the log before it’s sent through the canter. The water helps reduce sawdust and keeps the logs cool, Drew says.

The Micromill outfeeds products onto enclosed green chains where products are graded, sorted and packaged.  This new 10,000 square-foot building will also house a new resaw line to be installed in July this year. The resaw will allow low-grade coming off the micromill and bandmills to be resawn to improve grade recovery.  Finished packages are moved out of the building via overhead cranes to the shipping area.

Woodco ships throughout Canada and into the U.S.

Insider knowledge
Before there was Woodco, Drew was busy with his first company, Forsite — an integrated forestry management company that started up in 1987.

Today Forsite employs 140 staff with 10 locations in B.C., Alberta, Saskatchewan and Ontario. The move to Ontario was recent with the acquisition of a software and consultant company in the Ottawa area.

The company covers everything from strategic level timber supply analysis right down to boots on the ground timber cruising, Drew says. They work for major forest companies in B.C. as well as community forests and First Nations to aid in planning, timber development and engineering.

Drew’s forestry background and nearly 30 years as a consultant with Forsite have been critical to his success at Woodco. “It’s been very valuable because that’s where the relationships were formed and I have a good understanding of the logs. All of our log supply is about trading and relationships,” he says.

As president of both companies, Drew splits his time between both. “It’s probably about 50-50, but the roles are very different. Forsite can run totally independent of me. Woodco needs a bit more attention and I’m more of a general and operations manager,” he says.

“It takes a team, like anything. I’ve got some great people here at Woodco, like Rod Fowler, our site manager, and Alan Brown, our supervisor in training, and my son, Jason — so those people are supporting the growth here,” Drew says.

Jason currently works as a sawmill operator and lead millwright at Woodco, and is slowly taking on more of a managerial role at the mill. During our tour he was operating the sawmill canter.

“It’s interesting work and it really sucks you in — the day just flies by,” Jason says.

Log supply
With log prices at record highs due to a confluence of events in Canada (wildfires, lower annual allowable cuts) and the U.S. (labour shortage, increased lumber demand on top of U.S. duties), log supply has been a challenge not only for Woodco but all other producers in B.C.

“I would say the overall timber supply is tight. That is affecting us by driving log prices up and making the trading more difficult because people become much more protective of their wood,” Drew says.