Aug. 16, 2016 - In the small town of Big River, lies the largest sawmill in all of Saskatchewan. The town of a little over 600 people, which sits about 130 kilometres northwest of Prince Albert, Sask. is home to Carrier Forest Products’ Big River sawmill. 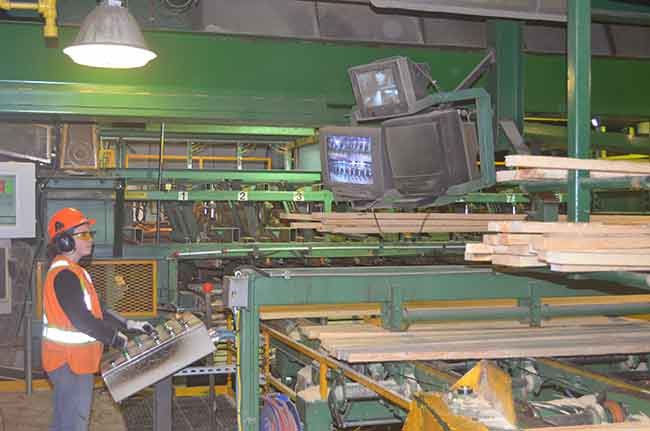 More than 100 people are employed at the mill – a significant number of good-paying jobs for the region. Weyerhaeuser previously ran the mill until the company shut it down in 2006. The mill then sat idle until Eacom purchased it then sold it Carrier in 2010. Carrier was looking to increase its lumber volumes and the mill seemed like a good fit to the company’s owner, William Kordyban.

Although Carrier is headquartered in Prince George, B.C., the company already had plenty of experience working in the land of the living skies.

“We came to the province of Saskatchewan in 1995,” Kordyban says while offering Canadian Forest Industries a tour of the Big River mill operations. “There were a large number of fires and we were in the salvage business back then. We moved one of our modular sawmills here – to Prince Albert – and then we started working with the Saskatchewan government. It was kind of fortuitous when Weyerhaeuser decided to exit. They opened up the Prince Albert forest management area (FMA) and re-allocated. We got our allocation and part of the allocation was to start up this mill. There were about 200,000 cubic metres available, so we combined that 200,000 metres with a couple other quotas and volumes that we had and came up with a critical mass.”

Carrier then focused the next couple of years around upgrading various aspects of the sawmill and planer mill.

“What we saw was that the base equipment was good, robust equipment but the electronics, scanning and controls were dated,” Kordyban explains. “The basic mechanicals since 2000 haven’t really changed, but all of the controls and scanners, that’s where all the big improvements have come in.”

The list of upgrades done to the mill over the past few years is long and involves almost every aspect of Carrier’s operation in Big River.

Logs that are seven inches and larger in diameter are sent to the large log line, which is equipped with a twin band mill with a curve saw gang tailing it for primary breakdown.

“It’s the older style where it flops it on its side and it’s rescanned,” Kordyban explains. “We installed all the upgrades for this line in 2013.”

Mill management recently worked with Porter to upgrade the small log line, which is equipped with a four-sided canter with a vertical double arbor (VDA) at the end.

“Optimization and computerization was done at the end of June,” Kordyban says. “It looks very promising.”

Carrier also invested in its older model USNR lineal edger, upgrading the software, motion controls, PLCs and scanners; and also made upgrades to the planer mill’s unscrambler and lug loader.

“We upgraded our unscrambler mechanically, and installed VFDs for the infeed to the lug loader,” Kordyban says.

The lug loader’s controls were also upgraded in late 2015 and a new USNR Smart Gate trimmer and new USNR multi-track fence were installed.

To optimize its drying operations in 2015, Carrier upgraded the kiln software for its four kilns – two single-track kilns and two double-track kilns.

The log yard even received some upgrades, including paving and yard work.

At the planer
In December 2015, Carrier made serious upgrades to its planer mill, including installing a new Wolftek Feedtable, new electric drive system for the planer and for the bridge; converting all the hydraulics to electric VFD-driven motion control; and upgrading the roll positioning to Wolftek’s Dynamic Tensioning System. Wolftek provided the installation and employee training for the project, as well as electric set works for the planer heads. “That way if there are jams, they can open the heads quick and they’re able to be back up and running quickly,” explains Scott Sutherland, director of sales and business development for Wolftek.

The mill also installed a USNR lineal high grader (LHG) after the planer for automated grading.

“We took out four grader booths,” says Scott Atchison, Big River’s former planer manager that was involved in the upgrades to the mill. “Now we run with one check grader in conjunction with the LHG. We’ve incorporated the USNR grade projector to help the grade checker identify the lumber on the table. It uses a code generated from the machine that projects a picture of each board that tells you what the grade is. It uses a binary code sprayed on the bottom of each board. It uses an ultraviolet (UV) detector that reads that code and interprets it and projects what the machine is saying it is – so the grader can look at the board and see what the machine is saying and if he agrees, he lets it go, and if there’s something it might have missed he marks what to do. It shows that he can make an evaluation based on what the machine is saying without leaving any marks on the board.”

“The check grader can make sure that the LHG is making proper decisions and isn’t going out of calibration,” Kordyban adds.

At the back-end of the planer mill, a new Samuel ink jet stamper was installed and the strapping line was converted to plastic strapping.

a town with a population just over 600

Log diet
All of the work performed at the mill’s operations in Big River adds up to several million dollars worth of investment in upgrades – a significant investment into a mill with a production capacity that management wasn’t entirely sure of at the time of its purchase.

“When we acquired it, we really weren’t sure what the production capacity should be,” explained Kordyban. “It’s so dependent on the log diet. We’re more concerned with log counts [than board feet]. Between the two lines you’re shooting for at least 12,000 logs per shift. So far, we have reached 14,000 logs. The production here can be, depending on log size, anywhere from 300,000 to 450,000 board feet per shift. It really depends on the log diet.”

The fibre processed at the mill is a standard SPF-type mix with a combination of white spruce, black spruce, jack pine and balsam fir. However, the fibre being harvested for the mill can vary significantly during different times of the year.

“In the winter you can get into some areas where there’s more spruce – the wetter areas,” Kordyban explains. “In the summer, you’re restricted to the pine areas and the jack pine in this part of the world is quite crooked. Last year we had a very dry spring and summer and we had some very big forest fires in northern Saskatchewan that were immediately followed by heavy rains, so you were prevented from logging due to the fires and then we were faced with floods – the weather and very fine textured soils can make summer harvesting challenging.”

The fibre brought into the mill is used to produce a variety of dimensional lumber ranging from 2’x4’ eight-foot boards to 2’x10’ 16-foot boards.

“We are looking at recovering down to one inch, but that’s just being worked on right now,” Kordyban says.

Since the last set of upgrades, the company has seen an uptake of about 30,000 more board feet per shift in the planer, according to Atchison.

Since purchasing and upgrading the Big River mill, Carrier is now capable of producing 500 million board feet of lumber annually and employs over 250 people.

As far as future upgrades at the Big River mill go, the addition of a stud line for processing the smaller logs, turning the mill into a three-line operation, is something being considered.

“That’s something we would look at,” Kordyban says.