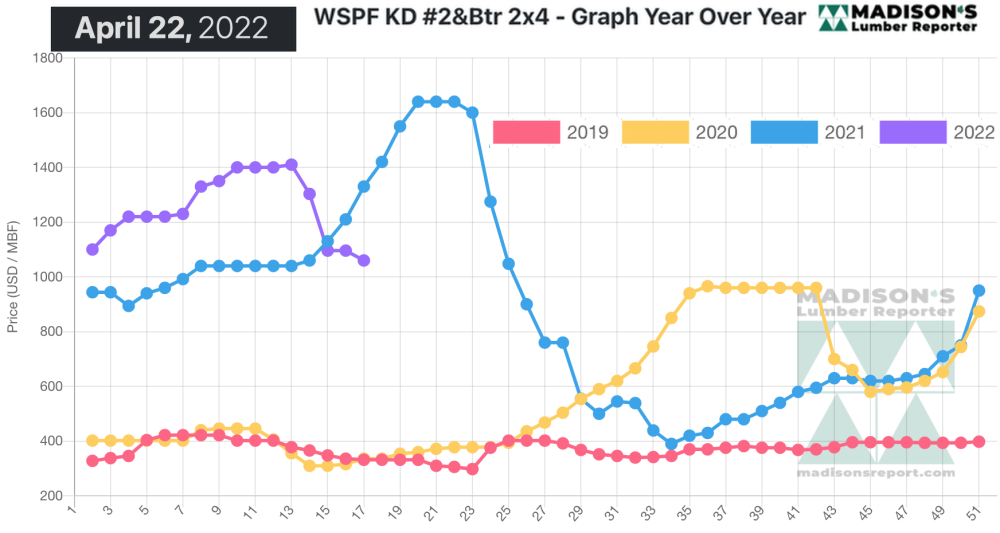 For the moment it seems the North American construction framing dimension softwood lumber market has found a supply-demand balance, as the benchmark price drops slightly but many others remain flat. In the week following Easter, which is a big-deal holiday in Canada, sawmills and wholesalers seemed to find good price levels which attracted back customers who may have been waiting to book purchases. Suppliers reported robust sales on continued plump inventories, while buyer enthusiasm pushed sawmill order files into early May. Good spring weather brought increased construction activity in many markets across the U.S., while Canada had quite a bought of cold weather and snow. This will melt quickly though, and building will soon move into high gear across Canada as well.

Both lumber and panel prices appeared to have turned a corner, establishing a tentative bottom.

“Price drops stabilized around midweek, turning the following week into an important litmus test as to the sustainability of this reversal.” — Madison’s Lumber Reporter 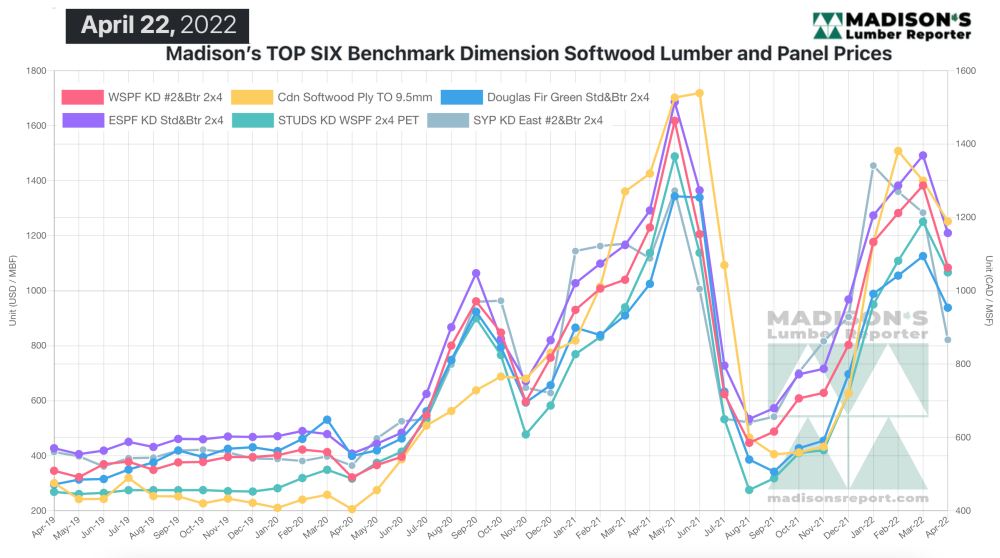 The lumber market at large balanced out noticeably according to Western S-P-F traders in the United States. As construction activity in most regions of the country came further to life thanks to burgeoning spring weather, buyers felt pressure to shore up their depleted inventories into May and beyond.  Early-May order files were commonly reported by sawmills..

Western S-P-F purveyors in Canada came back to a much more active market following the Easter holiday weekend. The more balanced tone convinced many buyers that it was time to get down off the fence and secure some coverage. Mills still showed decent volumes on their lists, but steep counters appeared to be a thing of the past. And while secondaries continued to sell below-replacement, those numbers were closer to mill levels than they have been weeks. Players reported difficulties with reaching remote field locations and covering rising freight rates.

“Buyers of Eastern S-P-F sheet goods had ample volume to cover to keep ahead of burgeoning construction markets. Prices continued to be elusive due to variation between mills and distributors, surging freight rates, and myriad counter-offers still coming from buyers. Panel dealers in Western Canada welcomed a tangibly busier week as the end of April approached. OSB prices appeared to hit a bottom early on and players navigated another tricky week of trading. Plywood numbers were hard to pin down.” — Madison’s Lumber Reporter www.madisonsreport.com