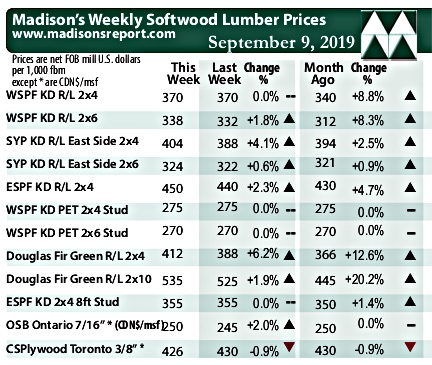 The first full back-to-work/school week for September 2019 did not bode well for North American construction framing softwood lumber prices, said Madison’s Lumber Reporter Monday. While wholesaler prices of many wood home building materials stayed flat, and there were two panel mill and one sawmill curtailment announcements, overall demand was not encouraging for an improving market before winter sets in. Due to production cuts, many operators — at sawmills and plywood mills and OSB producers as well — were able to get their order files to longer than one week. Will the tenuous supply-demand balance continue through autumn? Or will customers try to get their way by holding off buying until lumber prices fall again? Keep reading to find out more:

This week benchmark lumber commodity Western Spruce-Pine-Fir KD 2×4 #2&Btr price remained unchanged from the previous week, to close again at U.S. $370 mfbm. One month ago this price was falling, hard. That may have stopped as, by comparison, this week’s price is up +$30, or +9%, from one month ago.
Compared to one year ago, this price is down -$112, or -23%.

On the west coast, Douglas fir sawmills remained staunchly in the driver’s seat, with lumber production order files typically as far out as Sept. 23, and pushing even farther. — Madison’s Lumber Reporter

Eastern stocking wholesalers, working mostly out of New Jersey, noted that sales were better this week, and while prices still weren’t optimal they at least appeared to be on an upward trajectory. Oriented strand board (OSB) and plywood were up along the Eastern Seaboard due to apprehensions about Hurricane Dorian. Meanwhile, vendors in the U.S. Northeast benefited from producers’ current low supply levels, selling old, weathered lumber to desperate customers.

In panels, secondary suppliers of Eastern Spruce-Pine-Fir plywood in Canada reported good business out of their yards as buyers got back to the table on Tuesday. Plywood mill order files in the East ranged from Sept. 16-23.

Sales of OSB finally showed some life thanks to reduced volumes coming in from the U.S. Northeast and North Central regions. Low inventories ensured frequent participation from customers, and OSB mill order files were between Sept. 16 and early October.

Western Spruce-Pine-Fir panel vendors again navigated a “frustrating market” this week. Selling OSB was brutal, and secondary suppliers were tempted to just let their inventories run down to the pavement rather than continue taking precipitous losses. Plywood sales were weak as well; and despite whittling down order files to next week, plywood producers in the west refused to budge on pricing.