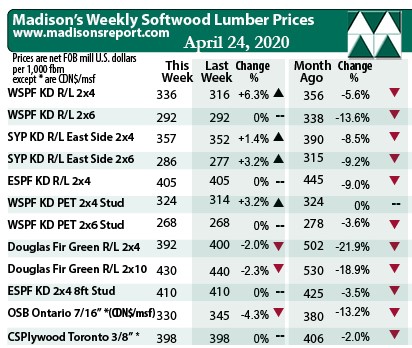 As Madison’s said in mid-April, “only in the future will we know” if North America construction framing dimension softwood lumber prices reached the bottom, or if they would fall further. Given the wee surge last week, we now know that prices have bounced from those lows of two weeks ago. Whether they will remain there in the short term, or if restricted supply will drive another surge upward, remains to be seen. The upheavals of the past month or two are far from over.

In addition to the sudden changes in business and indeed life, brought on by this global virus pandemic, right now the northwest of Canada is experiencing some severe flooding. A late spring break-up has brought large volumes of snow-melt and ice down the immense rivers of northern Alberta and British Columbia. While the Canadian west coast sawmilling industry always welcomes with glee the spring freshet on the mighty Fraser River, there is a temporary lull in log hauling and lumber deliveries as the usual floods across highways and rail lines arrive. 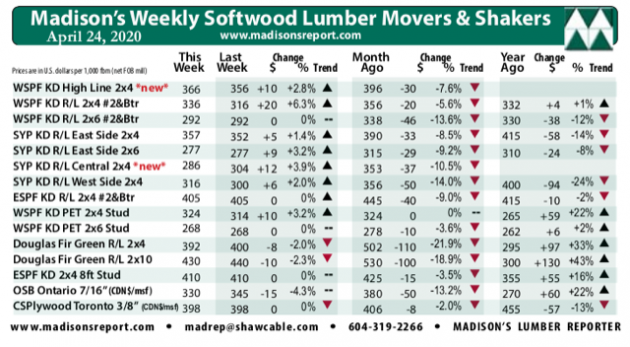 “Reduced production at sawmills and steady demand by end-users led to firm pricing in standard-grade lumber and in studs.” — Madison’s Lumber Reporter

Canadian Western Spruce-Pine-Fir producers described a persistent upward price trend developing in most of their wares, while buyers were beginning to get spooked by the palpable lack of wood available last week. Swathes of sawmills remained shut down or heavily curtailed, and those that were operational were “running for Asia”. Two-week or more order files at sawmills emerged as the market tightened up with so much production taken out. Sawmills had trouble keeping stock of 2×4 #3/Utility R/L on their sales lists as demand for that item was apparently really hot into Texas.

Spring breakup of ice on the mighty Fraser River in British Columbia was in full swing, halting most timber harvesting and log hauling operations for the time being.

Eastern Canadian lumber and studs suppliers described a mixed market last week depending on the source, destination, and item. While pricing of #2&Btr dimension lumber into the American Great Lakes market held firm for the most part, that of delivered prices into the Toronto market — aside from 2×4 which nudged up $5 to US$495 mfbm — crashed down.