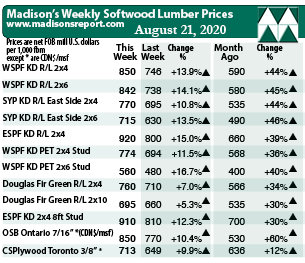 Madison’s Lumber Reporter advises North American forest products manufacturers to put on their seat belts, as the latest housing market data indicates no stop to relentlessly rising softwood lumber prices any time soon. Currently, sawmills in Canada and the U.S. simply can not keep up with ongoing very strong demand for house construction in both countries. While some builders and contractors are beginning to hold off on projects in anticipation of the usual autumn slow-down in demand for building materials, others are committed to construction already started and can do nothing but place orders for much-needed wood. As stated in the past few weeks: it is delivery times rather than price which determine whether an order for lumber will be closed. Customers continue to vigorously search throughout the supply chain for even small quantities of necessary lumber, despite having to wait more than a month for materials to arrive at job sites.

Both existing home sales and new home sales, as well as prices, data released in the past few days in the U.S. and Canada show extremely strong demand. A lot of this demand has been pent-up since before the lock down and restrictions due to the COVID-19 pandemic; meaning there will be no reversal any time soon. Truly this is unprecedented, in several ways, and it is impossible to make a projection about what is going to happen as winter 2020 looms.

Storm season in the U.S. looks to be coming on strong, which could very well put further upward pressure on panel prices. Especially plywood, for repairs and reconstruction.

Western S-P-F purveyors in the United States reported another crazy week of extremely limited availability as buyers desperately tried to cover their most pressing needs. Prices soared again and sawmills pushed their order files into late September, with delivery times extending into mid-October thanks to mounting rail car delays. Field inventories at all levels were depleted and secondary suppliers had little to offer for quick shipment. Prices of low grade offerings came on strong in the past fortnight as buyers broadened their search to include literally any piece of processed fibre they could find.

There was no pause in the insanity last week as Canadian Western S-P-F producers sold out every day before 8:00am, leaving no cash wood available for customers in the U.S. Prices vaulted again, last week by an astounding $104 on both 2×4 and 2×6 R/L #2&Btr dimension, to US$850 and U.S.$842 mfbm respectively. Sales of low grade items got some serious traction last week also, with #3/Utility and #4/Economy rising by between $40 and $76. According to sellers, there was no push back whatsoever on these head-spinning prices as the market remained under bought and field inventories were virtually empty. Demand in Canada was especially nutty to hear producers tell it. September 28 order files at sawmills were common, while actual arrival times pushed into November as transportation worsened.

Much to the astonishment of all and dismay of some, for the week ending August 21, 2020, prices of standard construction framing dimension softwood lumber items soared almost out of the scope of possibility. Benchmark softwood lumber item Western S-P-F 2×4 #2&Btr KD price hurtled up +104, or +14 per cent, to US$850 mfbm (net FOB sawmill), from US$746 the previous week. The price for this lumber commodity was up +$260, or +44 per cent, from one month ago. Compared to the same week in 2019, when this item was selling for US$346 mfbm, it is up +$504, or an unprecedented +146 per cent. 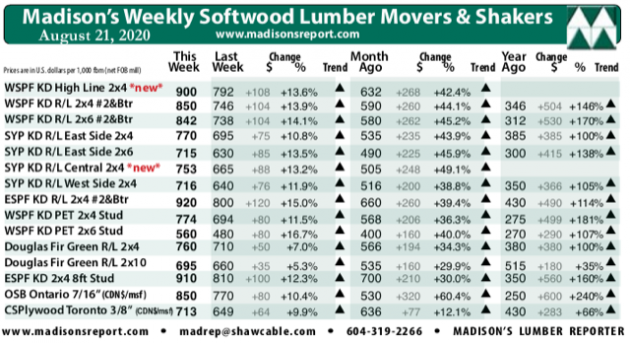