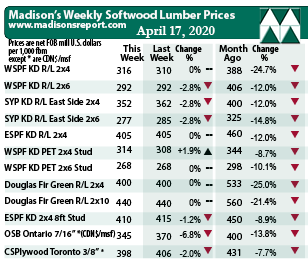 In contrast to the sharp plummets of recent weeks, most North American construction framing dimension softwood lumber prices either remained steady or dropped by smaller increments last week as distributors had decent demand from end-users. Supply remained limited to tight, and sawmills held firm on price lists from the previous week as their order files grew out to almost two weeks.

Prolific reductions in sawmill operations across the North American continent had the effect of stabilizing the lumber market further. Deep price corrections and significant counters began to evaporate as supply started to fall behind anaemic demand. Purveyors of Western S-P-F in the United States reported slow demand from the construction sector; but with reduced overall production volumes it was enough to get by. 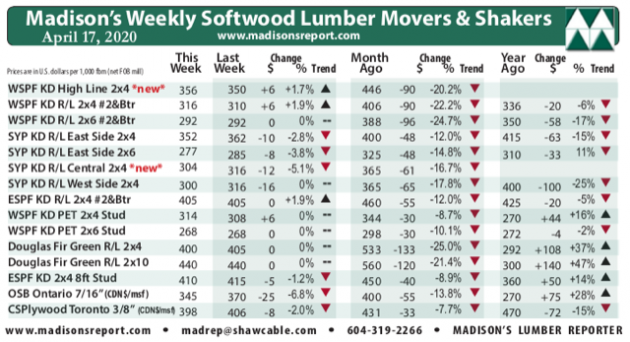 According to Canadian producers of WSPF lumber, sales volumes have been good since the beginning of April. Last week, buyers were active up until Thursday when they paused to allow inbound shipments to arrive so they could assess their strapped inventories. Availability of low grade WSPF has decreased significantly after both Canadian and American sawmills sent huge amounts of #3/Utility and #4/Economy wood overseas to China.

Western Spruce-Pine-Fir sawmill order files were around a fortnight out, give or take a week depending on the source and the item. — Madison’s Lumber Reporter

Meanwhile at the delivery hub of the ports in New Jersey, eastern stocking wholesalers were grateful to have another week in the books considering the health crisis occupying the wider world. While no one was buying full trucks of anything, vendors were kept busy with lots of small orders from pokey customers. Buyers needed ‘a little of this and a little of that’, so deliveries were commonly confined to a few split loads per day. Improving weather along the Eastern Seaboard would usually kick-start construction at this time of year, but jobsites remained muted for the most part.