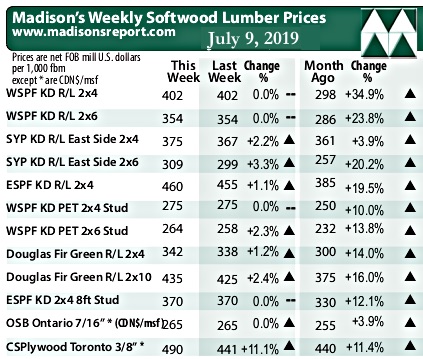 The closures and curtailments at North American softwood lumber manufacturers earlier this year, almost all at British Columbia sawmills, has achieved it’s intended consequence of improved supply-demand balance. Until that wood production went offline, order files at most sawmills were one week or less, which is incredibly short for the time of year. In recent weeks, producers have been able to extend those order files to a more healthy duration. Last week, most reported to have enough orders that future production is booked at almost two weeks ahead.
Demand, while still slack for the time of year, was strong enough to prevent suppliers from having to reduce prices.

Softwood lumber sales and trading on the futures board took a step back as players in Canada and the U.S. absconded for national holidays. — Madison’s Lumber Reporter

As we head into the usual slower summer time for lumber manufacturing, it seems buyers and sellers have found a new price floor. Barring serious or unusual events, Madison’s expects these current price levels to remain until Labour Day. The normal trend in the past has been for prices to soften in autumn, usually ending the year at new lows. However, the past few years have not been “normal.” Madison’s will be there right on time to inform about any changes that occur in the North American softwood lumber market.

After settling up the prior week, most lumber prices this week remain flat, with benchmark lumber commodity Western Spruce-Pine-Fir 2×4 wholesaler price still at U.S. $402 mfbm from last week. This week’s price is +$104, or +35%, more than it was one month ago. Compared to one year ago, this price is down -$220, or -35%.

In Eastern Canada, trading of Eastern Spruce-Pine-Fir lumber was as quiet as other commodities last week. Folks on both sides of the border were out of the office to observe their respective national holidays. Firm pricing was common however, with levels remaining flat from the previous week, or creeping up by $5-$10. Producers in Quebec prepared for the upcoming two-week construction shutdown in their province. With roughly two-week sawmill order files at present, finding other sources of demand are a high priority for customers over the next couple of weeks. Two-tiered sales activity remained prevalent as secondary suppliers continued to offer quicker shipment and slightly lower price levels than sawmills.

The below table is a comparison of recent highs, in July 2018, and current July 2019 benchmark dimension softwood lumber 2×4 prices compared to historical highs of 2004/05 and compared to recent lows of Sept. 2015: