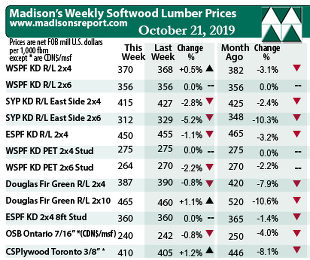 In a time when literally no one knows what is happening with the North American construction framing dimension softwood lumber market — let alone what will happen to the end of 2019 — the price of most lumber items moderated downward over last month. For its part, benchmark softwood lumber item Western Spruce-Pine-Fir KD 2×4 #2&Btr actually gained over last week, up by +$2 to U.S. $370 mfbm, but did drop -$12 from one month ago when it was U.S. $382 mfbm. Last week’s gathering of Canadian and U.S. lumber traders at the annual North American Wholesale Lumbermen’s Association (NAWLA) in San Antonio, Tex., was extremely well-attended by enthusiastic participants from sawmills and wholesalers alike. Even after all the information sessions and networking, industry insiders started this week no less confused by the lumber market than they have been since Labour Day.

As if the relatively wide swings in lumber prices at a usually muted time of year weren’t enough, further drama is unfolding this week with the softwood lumber dispute in Washington, D.C. Currently the U.S. International Trade Commission (ITC) is seeking public comments on any perceived subsidies on U.S. softwood lumber imports. In view of that, Madison’s reminds readers of this important economic study we co-wrote in 3Q 2016, Province Specific Impacts of the 2006 United States-Canada Softwood Lumber Agreement: A Seemingly Unrelated Regression Approach. This report “evaluates effects of the 2006 U.S.-Canada Softwood Lumber Agreement (SLA 2006) on U.S. lumber imports from Canadian provinces. Based on monthly data from January 1988 to October 2015, we estimate a system of U.S. softwood lumber import equations by using Seemingly Unrelated Regression approach. The results reveal that SLA 2006 had a negative impact on softwood lumber shipments to the U.S. from British Columbia, Ontario, Quebec, and Saskatchewan, and no effect on those from SLA-exempted provinces. Thus, SLA 2006 did not provide an opportunity for trade diversion from SLA covered provinces to exempted provinces.” Details and link to full report here.

Sales of standard grades improved palpably, while scores of players were away at NAWLA. — Madison’s Lumber Reporter

WSPF producers in the United States nudged up asking prices on a few bread and butter items, causing a large contingent of buyers to decide it was time for more than just short-covering. — Madison’s Lumber Reporter

After a quiet Monday the previous week, sellers of kiln-dried Douglas-fir commodities reported last week a noticeable groundswell of demand which resulted in higher sales volumes. Business only got better as the week wore on. Buyers repeatedly returned to the table, sensing a strengthening trend of the market so finally filled gaping holes in their inventories. Sawmills in the Pacific Northwest pushed their order files on dimension items into the month of November, while production times for studs were still roughly at a week out.