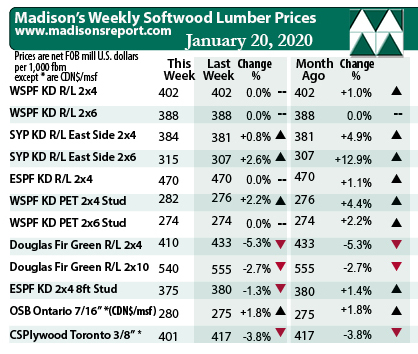 New home building in the U.S. skyrocketted by almost 17 per cent last month, however, this is after an almost equally sharp drop in November. Reasonably clement weather in the densely-populated U.S. northeast last week allowed for quite robust construction activity, providing softwood lumber sellers the opportunity to hold prices mostly flat. Sudden winterly weather hit the west coast, meanwhile, absolutely stopping transportation and major outside activity for two days. As usual, within a few days the rain started and melted a lot of the snow pretty fast.

Frigid weather restricted production and transportation in the West, while milder climes bolstered business in the East. – Madison’s Lumber Reporter

Eastern stocking wholesalers described an unusual week in their neck of the woods. Weather remained surprisingly good as did resultant construction and lumber sales activity, but prices were slow to get moving upward. Trucking equipment was scarce as recent decent weather in the US Northeast increased shipping of all building materials around the region

Sales activity may have settled down a bit from the previous week’s flurry, but traders of Kiln-Dried Douglas-fir lumber and studs continued to sell every day with confidence. The pace of business took a small step back in dimension products, but studs were again undersupplied, attractively-priced, and in high demand. – Madison’s Lumber Reporter

The below table is a comparison of recent highs, in June 2018, and current January 2020 benchmark dimension softwood lumber 2×4 prices compared to historical highs of 2004/05 and compared to recent lows of Sept 2015: