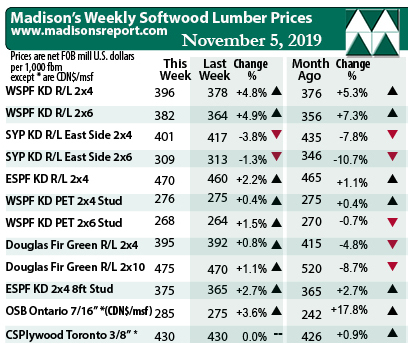 Veteran solid wood processors and sellers like to say, “Labour Day is the beginning of the end, and U.S. Thanksgiving is the end of the end,” for large-volume lumber sales. The business of manufacturing and distributing North American construction framing dimension softwood lumber is directly tied to U.S. home building and remodelling activity. As darkness and bad weather looms across the continent, construction jobsites start to close down. Well aware of this annual cycle, sawmills tend to load up their yards with logs in anticipation of renewed processing come January or February, and to empty their lumber yards of manufactured wood inventories.

Madison’s Lumber Reporter reminds there is a tricky balance for forest operators, between investment in log supplies and the year-end slowdown of lumber manufacturing. Companies want to have enough wood on hand to serve demand through December, but not so much that they have to carry-over inventory into the following year. As well, producers don’t want to get caught short of lumber supply either, should there be a run on sales before December ends.

Continuing recent climbs, the price of benchmark construction framing dimension softwood lumber commodity Western Spruce-Pine-Fir KD 2×4 #2&Btr popped +$18, or +5%, last week to close at US$396 mfbm. Last week’s price is +$20, or +5%, more than it was one month ago. Compared to one year ago, when prices were at the beginning of a terrible slide, this price is up $82% or +26%.

Softwood lumber producers boosted their prices on standard-grade items; buyers had little choice but to capitulate as their own depleted inventories forced them coming back to make orders frequently – Madison’s Lumber Reporter

Canadian Western Spruce-Pine-Fir sawmills worked through a week that was not as brisk with sales as the previous, but still had plenty of strong takeaway. Most standard-grade dimension lumber offerings jumped in price between $10 and $24, and at least one large producer was sold out of all low grade by midweek, along with standard-grade 2×4, 2×6, and 2×8. Order files at sawmills were into the week of November 18 by Thursday, and were expected to push to the 25th before this week. Pockets of log supply trouble persisted in some regions of British Columbia and Alberta while producers waited for colder weather. For their part, traders of WSPF commodities in the United States had mid- to late-November sawmill order files, further underscored strengthening prices.

The below table is a comparison of recent highs, in June 2018, and current November 2019 benchmark dimension softwood lumber 2×4 prices compared to historical highs of 2004/05 and compared to recent lows of Sept 2015: