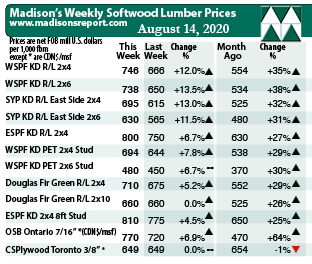 Softwood lumber prices just kept climbing last week as Canadian housing starts and home prices for July broke records. U.S. housing starts this week were no different; new home building in the U.S. increased +23 per cent in July — the biggest gain since October 2016 — to a seasonally adjusted annual rate of 1.496 million units, the U.S. Commerce Department said Tuesday. Single-family construction rose by more than +8 per cent and single-family permits increased +17 per cent to a 983,000 rate, the strongest since February. The number of residential projects authorized but not yet started also advanced, to 101,000 units in July, the biggest backlog since the end of 2018.

Due to this, demand for building materials and consequently sales prices continued their relentless increases at a time of year when usually builders and contractors have ordered the wood they need for construction projects, and prices have started falling. Where this situation will go no one knows … a combination of unprecedented circumstances makes every day a new adventure for sawmills and for customers.

As Western S-P-F sawmill order files in the U.S. pushed into the first and second weeks of September, buyers voiced their increasing frustration with limited availability, sky-high prices, shipping delays, and wire-thin credit lines. Contractors struggled to keep job sites going as lumber and studs were impossible to find. Substitutions abounded as long as the species in question satisfied state building codes. Sawmills had no way of increasing their production volumes to catch up with feverish demand, as most were at capacity while still dealing with the odd coronavirus-related staff shortage.

Western S-P-F producers in Canada reported another insane week in the lumber market as #2&Btr dimension offering prices pushed record highs, rising between $70 and $88. Prices of 2x4s rocketed up $80 to a head-spinning US$746 mfbm, and buyers didn’t even blink. Following the trend developed over the past several weeks, Canadian buyers bought every scrap of wood by 7:30am before any cash wood could be offered to U.S. customers. September 14 order files at sawmills were the norm. 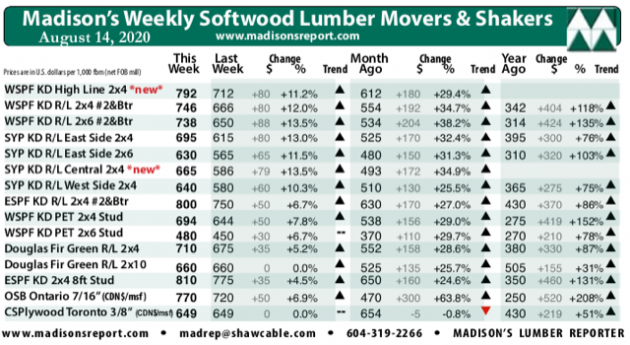 “As lumber and panel prices ratcheted up further in the U.S. Northeast, Eastern stocking wholesalers were surprised anyone would jump in at these levels knowing their orders wouldn’t reach them for a minimum of 45 to 60 days.” — Madison’s Lumber Reporter

Eastern S-P-F #2&Btr lumber and stud pricing advanced significantly once more last week. Demand was again unceasing according to players, as buyers had trouble covering even their most immediate needs. Secondary suppliers continued to offer quicker shipment whenever they had material, but availability of all commodities remained virtually nonexistent. Order files at sawmills were well into September. Stories persisted of construction outfits postponing already-quoted jobs to avoid paying record-high numbers for lumber and studs.