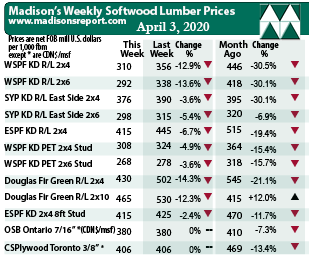 North American softwood lumber sawmills sold wood at a wide range of prices last week, as some refused to go lower than their price lists while others just took whatever offers they could get from reluctant buyers. Strangely, demand was not abated. It was, however, again only for highly-specified loads to fill orders wholesalers and secondary suppliers already had on their books. Once again no one was stocking inventory. This, together with more sawmill curtailments — especially at the important production hub in the middle of British Columbia — continued the malaise that has dominated the lumber market for the past couple of weeks.

A glimmer of hope was offered at the end of last week as the availability of many of these specific dimension lumber commodities became scarce to none. Indeed, panel prices held firm; with benchmark panel items Oriented Strand Board 7/16” Ontario and Canadian Softwood Plywood 3/8” Toronto both holding firm over the previous week, at C$380 msf and C$406 msf respectively. 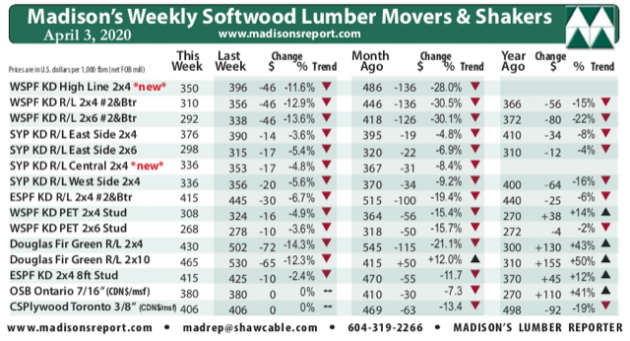 Over the almost 70 year history of the weekly Madison’s Lumber Reporter lumber price data, it is often the panel mills which are an early indicator of a change in the marketplace. There are fewer OSB and plywood mills than there are dimension lumber, and those producers are more disciplined than sawmills are. So, when prices shift either up or down, it is often panel prices which show that in the data first. Last week suppliers of OSB and plywood were able to hold their asking prices steady over the week before, which might suggest that dimension lumber prices will do the same this week.

“Normally so many panel mill curtailments would cause prices to spike, but weak demand generated by uncertainty meant players ran their inventories really lean. Producers alleged their Oriented Strand Board order files stretched into the week of April 13th, however actual availability appeared to be prompt. As in the case of plywood.” — Madison’s Lumber Reporter

Back to dimension lumber, rapidly falling WSPF prices at Canadian sawmills began to bring in buyers around midweek, as uncertain customers found price levels acceptable to actually trade. US buyers spent Monday and Tuesday last week confirming destinations for their wood – specifically which states’ construction industries were shut down and which weren’t – before diving in on to complete purchases on Wednesday. Western Canadian sawmill order files were no more than one week out. Producers were content to be selling what they were shipping.