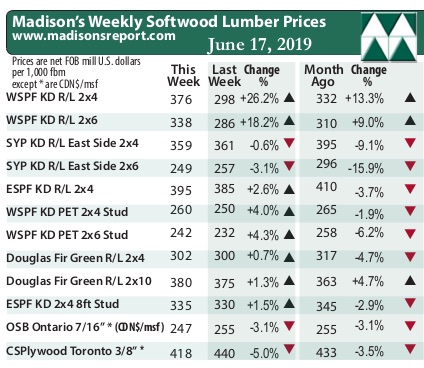 Benchmark North American construction framing dimension softwood lumber commodity Western Spruce-Pine-Fir KD 2×4 #2&Btr (RL) FOB sawmill wholesaler price (net FOB sawmill) absolutely skyrocketed last week, taking several other species’ lumber prices higher with it. There is possibly no looking back until after the usual U.S. home building season ends following Labour Day. For most of this year, buyers have hesitated to book orders — despite needing wood for ongoing building and construction projects — for fear that prices could go lower. Right now, enough production has been taken offline to keep prices buoyed. Soon enough the fire ban will go into effect in Canada and the U.S. Pacific Northwest. Thankfully, operators in these regions have well and abundantly-stocked log yards and should have enough feedstock to carry them through lumber manufacturing until the rains start again.

As the U.S. home building season moves into full swing, sawmill order files were extended into the week of July 1, with “only the odd item” available sooner. — Madison’s Lumber Reporter

Producers of kiln-dried Douglas-fir lumber described a distinctly upward trend in pricing and business in general. Order files at these sawmills were typically into the week of June 24, while some studs producers reported July 1 bookings. Mills again bemoaned the “brutal” cost of Doug-fir logs, which effectively ensured they would continue to operate at a loss for the time being. Players were happy to see construction markets all over the United States waking up finally, however. There is wood inventory laying around that got cleaned up with alacrity last week as scores of buyers eyed their empty stocks and jumped in to buy. Transportation was already “getting worse” with the increase in transit volumes this week. Due to slow rail cars, sawmills delivery was often two weeks out on essentially prompt stock.

For their part, Eastern Canadian lumber suppliers saw inquiry and follow-through increase palpably in both Canadian and U.S. markets – though more so in the latter. While ESPF mills didn’t boost their asking prices as much as their Western cohorts, roughly $10 increases were swallowed by customers with nary a peep. Early-July sawmill order files prevailed in standard grades while “weaker” low grade items could be found for quicker shipment.