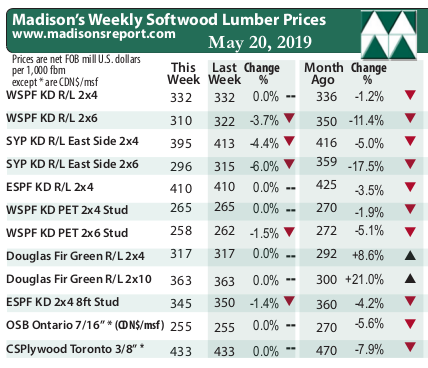 North America construction framing softwood dimension lumber prices were essentially flat this week compared to last, as sellers had a difficult time dealing with the sheer lack of demand.

Supplies are robust to bursting and field inventories are resplendent with wood. The latest U.S. home building, sales, and price data has been beyond glowing; so players in the Canadian and U.S. lumber market simply can not understand why their wood is not flying out the door. The severe weather conditions of this past winter are behind us, however almost immediately other problems started, including flooding and wildfires. As usual the railways are doing their best to resolve transportation delays. However demand for lumber has been so low that sawmills are not really noticing too many problems with shipping for now.

Sawmill order files in most regions were barely two weeks, which is quite short for this time of year given there have not been the volumes sold  yet in 2019 to cover what would be a normal U.S. home building season.

Due to this unseasonable, and unexpected, soft market, another major Canadian sawmill operator last week announced significant curtailments in British Columbia. Tolko Industries announced they will permanently close their Quest Wood sawmill in Quesnel, B.C., and reduce production from two shifts to one at their Kelowna, B.C., sawmill. Among the reasons cited for these decisions were prohibitive log costs, weak market conditions, catastrophic wildfire impacts, and cumulative reductions in Annual Allowable Cut volumes due to the Mountain Pine Beetle epidemic. In total, around 240 employees will be affected by the curtailment and closure, which will also reduce Tolko’s B.C. production capacity by 250 million board feet.

Western Spruce-Pine-Fir lumber purveyors in the United States had a “tricky” time of it this week. After a marginally encouraging spate of business last week buyers retreated to the sidelines as confidence seemed to tumble again. – Madison’s Lumber Reporter

The below table is a comparison of recent highs, in June 2018, and current May 2019 benchmark dimension softwood lumber 2×4 prices compared to historical highs of 2004/05 and compared to recent lows of Sept 2015: