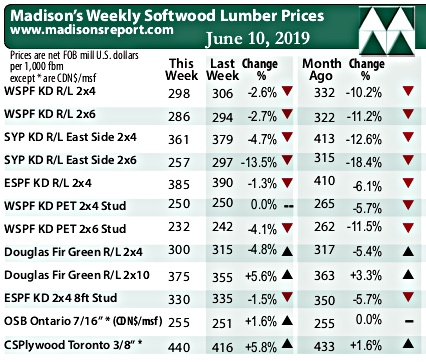 The latest announcement of major sawmill curtailments Monday, this time with Canfor making production cuts at all its facilities, caused a complete reversal of lumber futures prices on the Chicago Merchantile Exchange. It will be very interesting to see what happens with cash prices this week. Madison’s Lumber Reporter print is Friday mornings; this week, prices are likely to at least stop falling if not to actually increase. The latest North America sawmill capacity utilization rates, for March, released by the Western Wood Products Association in their monthly Lumber Track on Monday, shows Canadian sawmills improving both utilization and production volumes for that month. This trend, when it comes out for May later this year, will return downward, however, to reflect production volumes taken offline by British Columbia sawmill curtailments in March and April.

Business appeared to improve noticeably this week in dimension and ESPF panels, while sales of studs lagged behind a bit. — Madison’s Lumber Reporter

At this time last year those very high prices starting falling. However, this year both the U.S. home building and North America softwood lumber markets are completely different. An absolutely inscrutable trading board on the lumber futures board at Chicago Merchantile Exchange did nothing to help players understand what is happening with cash prices.

Traders of Western Spruce-Pine-Fir lumber in the U.S. described better market conditions this week, as many buyers sensed a change in the wind and dove in. Sales volumes were still comparatively small for the time of year but the total number of transactions day-to-day appeared to be increasing encouragingly. Producers in Canada, meanwhile, noted that sales activity kept improving as the downward trend in WSPF pricing continued to level off last week. A few important building markets in the U.S. had yet to rumble to life, but construction in many others was coming on strong just as demand from Canadian sources also improved. Canadian sawmill order files varied by WSPF item: June 17 for 2×4 and 2×6, June 24 for 2×8, and less than one week for 2×10 sizes.

Lumber producers in the U.S. weren’t too aggressive in extending sawmill order files at current prices, preferring to keep bookings only one or two weeks out. — Madison’s Lumber Reporter

For their part, kiln-dried Douglas-fir lumber traders continued to “grind” for sales this week. Weather appeared to be clearing in some key U.S. building regions but that development had yet to affect the lumber business in any meaningful way. Demand for 2×12 was “the only bright spot” according to one grizzled pro, only falling $5 to U.S. $470 mfbm. Sawmill order files at Douglas fir production facilities in the Pacific Northwest remained no more than two weeks out. Producers were fine with that at these levels.