When Al and Gord Kenyon tried that first time to glue together boards to make a structured beam for a hardware store, they couldn’t have imagined what that first experiment would lead to. But fast-forward over half a century from that first attempt at glulam, and the experiment has become the foundation for one of Canada’s leaders in specialized wood products for the building construction market. 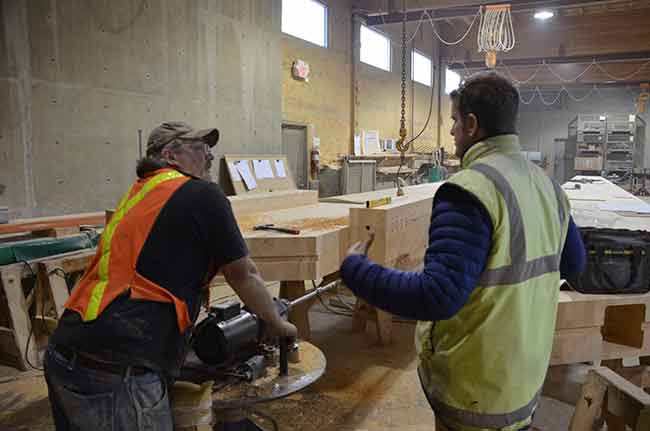 As the Kenyon brothers continued to bid for further construction projects throughout B.C. in the 1960s, the demand for laminated beams grew, which lead them to build a facility specifically for making glulam products. That helped their company, Kenyon Construction, expand, reaching out to construction contracts throughout all of Western Canada.

By the 1980s, ownership moved to the next generation of the Kenyon family in the form of Al’s sons, Doug and Larry, and their brother-in-law Mark Rufiange. Rebranded Structurlam, the trio led the company through a time of expansion into the Japanese market, incorporating extensive prefabrication and 3D modeling into the business in order to meet the strict quality demands of that market.

Then, in 2007, the company was sold to Adera Group, which rapidly expanded the company’s physical footprint.

First, Adera Group built a new manufacturing plant in Okanagan Falls, one that allowed them to triple the capacity for glulam production. That was followed in 2011 with the construction of the first CLT plant in Western North America, which was expanded one year later. Also in 2012, the company opened its third manufacturing plant in nearby Oliver, B.C., just 40km south of the head office in Penticton.

Game-changing technology
During the international expansion period of the 1980s through early 2000s, Structurlam moved to 3D modeling, the foundation for the specialized design work done for today’s modern structures.

Using Cadwork, a specialized 3D-Cam software for timber manufacturing, Structurlam’s design team is able to transform the final drawings for a wood building into a 3D model of the building, including each individual wood beam and steel connector.

From that 3D design, the team is able to determine the exact size and thickness of each beam that needs to be fabricated for the project. The designers can also do a virtual walkthrough of the design, identifying any discrepancies that they believe exist in the final drawings.

Once the 3D model is complete, the information is uploaded directly to the CNC machines, ensuring that each beam needed for each project is to the exact specification. The pieces are labelled in conjunction with the drawings, allowing the contractor on the site to know where every single beam needs to be ultimately placed within the final structure.

The process sounds far too oversimplified based on the ability of the software to provide exact specifications for the individual project, but it is the quality of the technical design specialists at Structurlam’s operation that allow the project drawings to come to life as a 3D structure.

Building the boards
The expanded factory in Okanagon Falls is home to both the expanded glulam production line as well as production of CLT.

Because of the quality standards consistent throughout the B.C. sawmill industry, Structurlam is able to purchase lumber at the best market price available, regardless of the manufacturer. Pulling into the production plant’s parking lot, it’s not uncommon to see wrapped lumber from multiple different mills throughout the Okanagon region and the B.C. Interior.

“Depending on what we are running at each time of day, everything that comes into our plant is finger-jointed first,” says Stephen Tolnai, vice-president of sales and marketing for Structurlam. “From there, the wood either goes to glulam or Crosslam.”

Each board used for glulam or CLT in the plant then undergoes two checks: one for moisture and one for density.

“We need to make sure each board is 12 per cent – plus or minus three per cent moisture – depending on what the product is,” Tolnai says. “Everything we manufacture has to be a certain density or a certain strength. That is absolutely critical.”

Once the Metriguard scanning system has checked both moisture and density, the boards pass through the KOE saw/press line and the necessary lengths are prepared. An Allied Blower system controls the air quality in the plant in order to ensure that fumes and dust are properly controlled to create a healthy work environment.

The glulam system requires semi-manual jigs with heavy-duty bolting systems manually applied in order to properly shape each piece based on the 3D modelling provided by the designers. The modelling program also provides the details needed by the specialists in the plant to place the bolting mechanisms where they are needed to meet end-product specifications.

The system for CLT production features a world-class glue and press system that produces large panels at a high rate of efficiency. This makes communication in the plant imperative, as each stage of the process must keep pace in order to ensure that downtime is minimized and backlogs do not occur. Each CLT board produced at the plant is built to meet the strict ANSI/APA PRG 320 standard for performance rated cross-laminated timber, as established by the American National Standards Institute (ANSI) and the Engineered Wood Association (APA).

Final touches
Once the panels and beams have been pressed, dried and planed, the pieces are trucked to the plant in nearby Penticton, B.C. That plant, which is also home to the company’s head office, is the site where final glulam preparation is completed before it is sent to the jobsite.

The plant includes CNC equipment for drilling the necessary holes and crevices needed for construction. Once again, the instructions for each individual piece are downloaded into the CNC machine from the Cadwork software, ensuring that the exact specifications are met. From there, each piece is then placed in the warehouse for final inspections, which includes any sanding or planing work necessary from the CNC process. Then each board is wrapped and again coded based on the 3D model, before being stored for shipment until the other needed pieces for the jobsite have been constructed.

The end product
The final product created through the Structurlam process can be seen at many of Canada’s premier facilities where wood has been heavily incorporated into the design, including several buildings on the campus of the University of British Columbia and the Wood Innovation and Design Centre in Prince George, B.C.

In the past five years, many Canadian provinces have welcomed new building standards that are encouraging the construction of mid-rise wooden structures.

With similar uniform, heavy-duty properties as steel and concrete, glulam and CLT are providing an environmentally friendly alternative that can reduce the carbon footprint of the next generation of construction in Canada.

Fire testing
In 2012, the National Research Council of Canada conducted extensive fire resistance tests involving cross-laminated timber. The tests were done in cooperation with FPInnovations in an effort to establish a methodology for building fire-safe structures using CLT.

The findings of the test revealed that, “CLT assemblies can achieve significant fire resistance that is close to three hours in some cases with even unprotected CLT under full loading conditions. The failure modes were a mix of integrity and structural failures.”