It was this same week last year when lumber prices reached an unimaginable all-time high, and stayed that way for a few short weeks before falling consistently through summer to almost meet the lows of 2019. As mentioned last week, this year prices are topping-out lower, and are bottoming-out higher. As industry and customers are realizing the “new normal” price levels in this post-Covid19 world, it seems that the incredible volatility of the past two years is behind us. In the past, this would be the time of year that lumber prices start to soften, as the major home builders and retailers would have made their largest-volume purchases for the coming building season. Whether that previously “normal” seasonality will come into play this year remains to be seen. Regardless, it is generally acknowledged that those extreme highs of last year will probably not return, and customers can expect more regular price swings going forward.

Field inventories were thin across the board even as construction markets revved up to finish jobs before interest rates rise in the coming months. 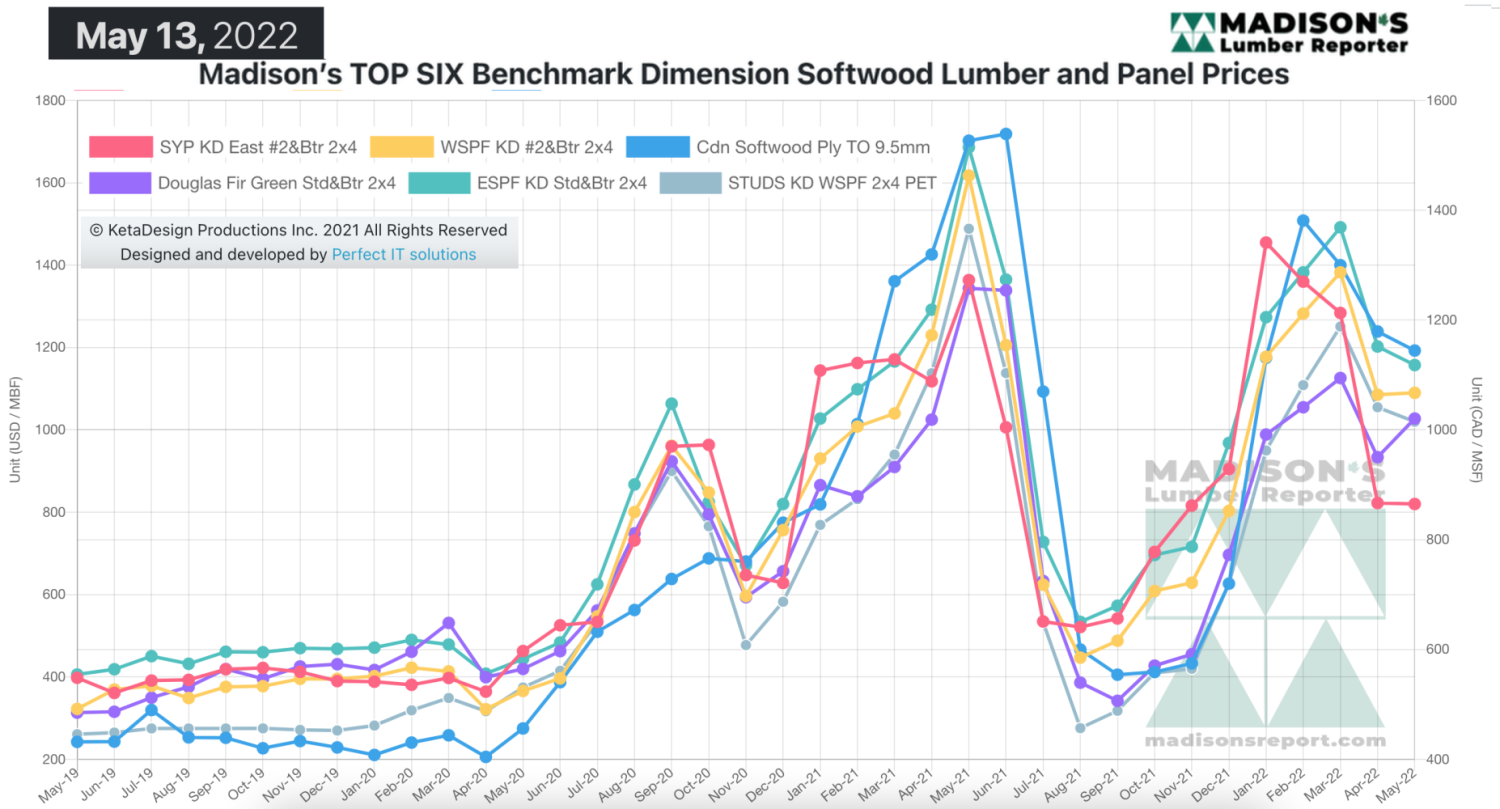 A weakening Futures board sent many U.S. buyers of Western S-P-F  lumber and studs to the sidelines. Those who were active found sawmill lists wanting. There were significant delays on highly sought-after widths and stud trims thanks to an ongoing lack of transportation equipment. Secondary suppliers continued to offer quicker shipment but at less flexible price points. Shipping backlogs put sawmill order files into the week of May 30th, indeed pushing into June.

Reported price levels of Western S-P-F dimension commodities were largely flat according to Canadian suppliers. Buyers were intermittently active, yet frustrated with the lack of sawmill offerings. That dearth of availability mostly came from an inability to ship, not from production constraints. One veteran player noted that some BC sawmills were buying their Futures position back because they couldn’t find rail cars. On top of ongoing equipment and personnel shortages, fuel surcharges continued their inexorable rise, with British Columbia one of the hardest hit regions in that regard.

“It was a challenging week for suppliers and buyers alike of Eastern S-P-F lumber. Production and shipping costs continued to climb as protracted transportation delays disrupted efficiency up and down the supply chain. Discouraging economic news dominated discourse. Retailers and other buyers got even more cautious, only putting in new orders when absolutely necessary and spending much of their time chasing down wood they had already purchased.” – Madison’s Lumber Reporter