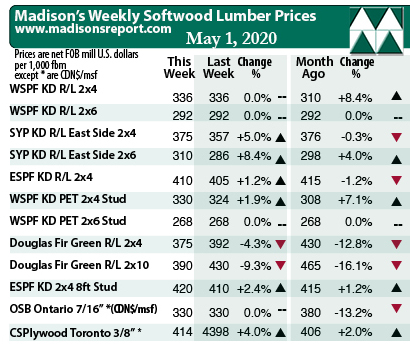 Improved demand and continued restricted supply last week brought some North American construction framing dimension softwood lumber prices back up to levels of one-month-ago, and indeed to match exactly what prices were at this time last year. The wholesaler price of benchmark softwood lumber commodity item Western Spruce-Pine-Fir KD 2×4 #2&Btr (RL) last week gained +$4, or +one per cent, compared to the same week in 2019, at US$336 mfbm (FOB sawmill).

Suppliers of Western SPF commodities in the U.S. reported improving sales activity and inquiry last week, as limited supply and scant field inventories created consistent demand. Sawmill order files were well into May and customers in many active construction markets found they had to scramble to short-cover some items for immediate needs. For their part, WSPF producers in Canada were apparently a week ahead on their price lists, and were sold out on most bread and butter items last week. 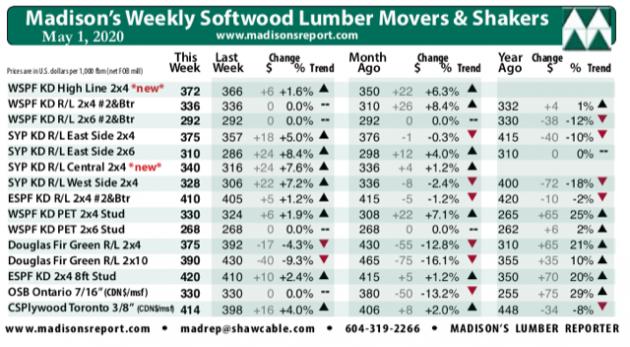 “Suppliers confirmed that Eastern SPF lumber and studs sold better with each passing day, as retailers experienced solid demand that kept them coming back to sawmills for more orders.” — Madison’s Lumber Reporter

On the west coast, the stable trade described in recent weeks by secondary suppliers of Kiln-Dried Douglas-fir commodities persisted last week. Demand for dimension lumber was again a bit weak when compared to that of studs. Sawmill order files on the former were one or two weeks out, while for nine-foot studs production orders were into the week of May 18. The majority of sales continued to come from buyers in the Southern and Western United States, while Northeastern regions observed more stringent restrictions on construction sectors.

Following the quiet end to Eastern Canadian lumber trading the previous week, sales activity took a few days to get going last week. As such, dimension softwood lumber prices didn’t move much, if at all. Supply of studs was demonstrably tighter, thus studs were more sought after by customers than dimension.