West Fraser closed on its $300-million purchase of Angelina Forest Products in December. The following article was published in Hatton-Brown’s Timber Processing July 2021 issue before West Fraser announced the acquisition. 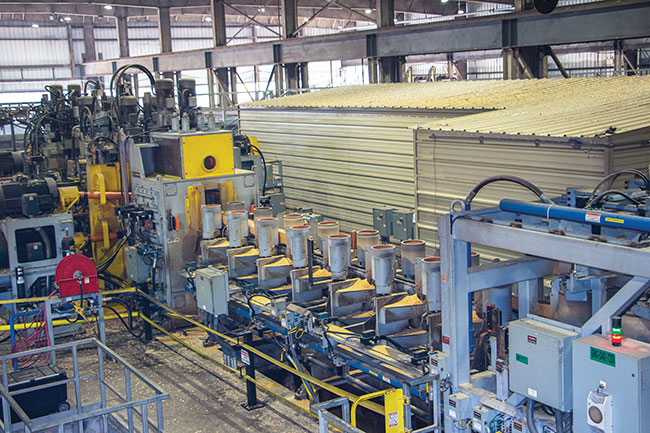 It is not a stretch to think of a greenfield startup as a well choreographed ballet. There are many players, a new stage and everything must follow the same beat, everyone leans on the veterans to help show the rookies what to do, and in the end something a little magical happens. A greenfield sawmill isn’t exactly magic, especially in the U.S. South these days, but it is still a modern marvel. For Angelina Forest Products (AFP) Mill Manager Wiley Quarles, the magic was not in tying his vendors together, or watching the engineers do their thing, it was in the promise and realization of jobs in his community. A native of Angelina County, Quarles has spent his career working in corporate mills throughout east Texas. The chance to be a part of an independent 270MMBF sawmill startup is always exciting for lumbermen, but Quarles says this just felt a little different.

The project went smoothly, and the team’s work safe record was impeccable. But what Quarles is most proud of is that the community he loves, that has seen other industry leave and take good jobs with it, now has another outlet. The icing on the cake is that the management structure of Angelina Forest Products is composed of local businessmen and landowners who had never built a sawmill before. “We talk about stewardship a lot, and having lived here my entire life, what a business like this brings to the county…To be a part of this project is very special to me,” Quarles reiterates.

Hired initially as the production manager, Quarles has since assumed the role of mill manager, and was one of the first to come onboard with the facility in September 2018 along with the mill’s maintenance manager.

Leaning heavily on the staff’s collective experience with Mid-South Engineering at other facilities for other projects, AFP selected Mid-South as the project engineer, while the internal AFP team managed the project themselves. For the greenfield facility, the management team, all of whom were lumber manufacturing veterans, was able to go with vendors they had prior knowledge of and experience with. From the equipment choices to rolling stock to Mid-South as the engineering firm, everyone had worked with someone else along the way.

The timeline was tight and aggressive, just under one year from field to facility, but doable. It was about a year from first bringing on staff and contractors to the commissioning of equipment, Quarles says, accomplished in part because of the vendors. The largest construction contractor on site, responsible for both mechanical and electrical portions of large areas of the mill, was PCE Constructors out of Louisiana. Timberline Erectors, Inc. handled the construction of the sorters, while USNR provided a turnkey solution for both continuous dry kilns. 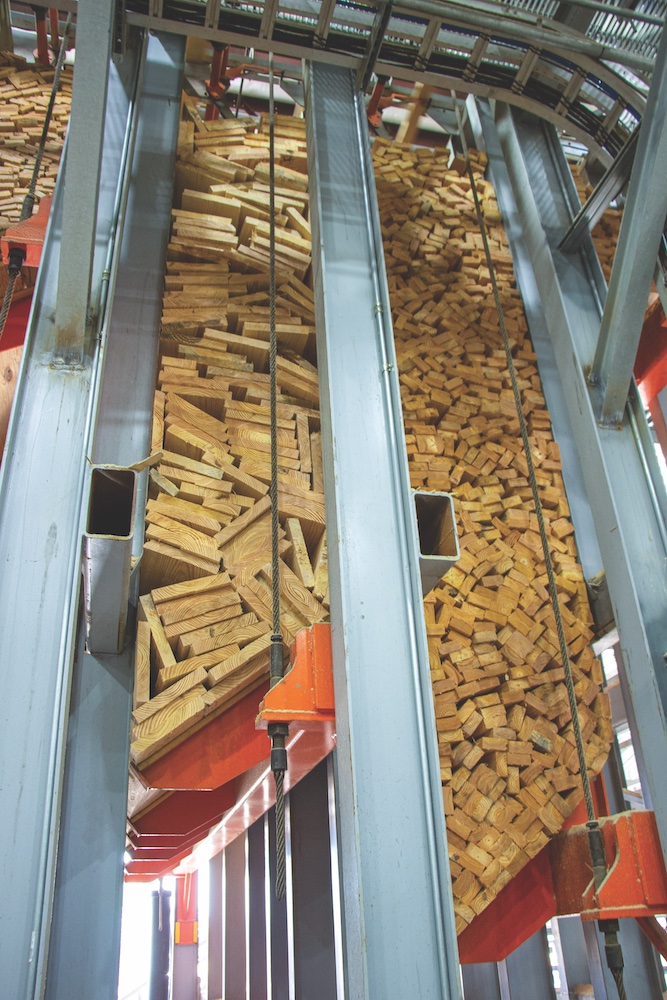 Quarles says while weather was a concern, and a setback early on in the process, once the foundation work was able to be completed, the long days didn’t exactly cease but things started clicking into place a little more regularly. “We had our challenges,” he adds. “Seven days a week working 12 to 16 hour days, but we got through it.” In the end, the plant was commissioned in early fall of 2019.

Of those startup issues, Quarles says a lot were on the controls side of things, a challenge but not an insurmountable one. The team pushed through together and was able to partner with vendors that Quarles says were not only very talented but helped get the issues resolved and bring production to an efficiency he’s pleased with. It was a group effort with a large amount of attention to detail, he says. That attention to detail is evident in the mill’s safe work history, and the team-building the veteran management team led throughout startup.

“We were very fortunate to have some experienced folks join our team,” Quarles notes, “and a portion of our team was new to sawmilling. But we have great folks out there working every day toward our goals; that’s been a huge positive.”

AFP reports a low turnover rate compared to the industry average, even through a greenfield startup—which ran on a “supershift” basis for six weeks before the staff of about 153 transitioned to a two-shift schedule. “Two was always the plan,” Quarles says. But the supershift was necessary to get them started and acclimated to the machines, and the machines acclimated to full production.

“Our processes continue to grow and evolve through process improvement,” he says. “As we’ve learned some of the demands of the equipment our asset care activities must adjust.” Newer mills demand electrical and controls attention and precision alignments are critical to success. Flexibility is the key in adjusting to the right schedule of reliability centered asset care activities, he explains.

Each of these critical changes have pushed AFP’s reliability and quality to be better than before, Quarles notes, but there is still opportunity for growth. To rise to the need to the newer, more electrical focused equipment, Quarles and the staff lean on technology previously not necessarily thought of for sawmills, like infrared cameras, vibration analysis and ultrasonic tools to make sure the assets are operating at their full potential. But, these changes don’t mean it is time for AFP to rest on its laurels. Quarles emphasizes, “Over the last year there have been tremendous strides and improvement: If you look at where we’ve been, last December was a strong month for us in terms of volume, and then through the first half of this year we have sustained that. But, there is still room for process improvement.”

Quarles might sound like a broken record to some, but he says the mill’s biggest opportunities are in improvements to reliability and efficiency.

Thanks to an incredibly favourable location to the massive markets of Houston, Dallas, San Antonio, Austin and New Braunfels, and a strong timber basket in east Texas, he has nothing to complain about: “That’s why our continued focus is going to be on getting stronger and having better throughput mill-wide.” 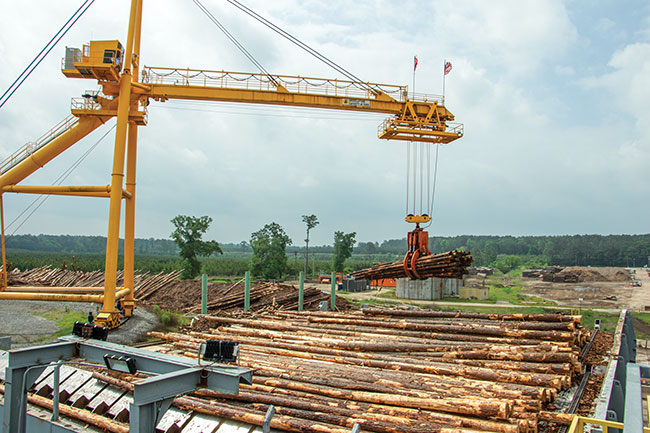 A procurement manager, aided by a procurement tech, oversee all needed southern yellow pine timber from a 121-kilometre radius of Lufkin. AFP purchases standing timber, gatewood and has agreements with land management companies to keep the 120-130 trucks per day moving through the gates.

Once brought onto the wood yard, a Fulghum single bite crane with a Mack grapple unloads trucks, and approximately 20,000 tons are able to be stored on the yard. Once ready for processing, logs are fed on a Timber Automation log infeed system, where they are debarked using a dual ring Valon Kone ring debarker then pass MDI metal detection. From there, logs travel to the Timber Automation merchandizing line, which positions the log and makes the programmed bucks. Three sort decks feed the primary breakdown.

The primary breakdown at AFP is a USNR quad arbor sawbox with vertical shape saw and gang. The log comes to the USNR infeed positioning rolls, and then two sides are chipped then downstream chippers chip the profiles along the edges of the cant and the quad arbor sawbox removes the sideboards. The cant runs through the gang configuration that removes profiled top and bottom boards and creates the remaining 2-inch pieces. A USNR three saw board edger takes sideboards or any reman material from the trimmer. Then it is to a USNR double unscrambler, USNR lug loading and trim system, and 55-bay sorter. A MoCo stick placing stacker prepares packs for the kilns.

AFP is a dimension mill, focusing heavily on narrow production. With flexibility thanks to the drying capacity, Quarles says the 270MMBF can ramp up significantly if needed, but for now production stays at 270MMBF in 2×4 to 2×12, 8 ft. to 20 ft. lengths. In order to cut those, cants are typically either 4 in., 6 in., 8 in., or 12 in. The primary breakdown is capable of making 10 in. but Quarles and his team don’t use them right now.

Once packaged for the kilns, bundles either go to the green yard or to one of the kilns. AFP has two USNR UniFlow unidirectional kilns (UDKs) with eight grate sawdust burners, and a third natural gas burning USNR batch kiln that was commissioned in the fall of 2020. Three packs are placed on each kiln cart. “We’re fuel positive,” Quarles notes with pride of the two UDKs. Of the batch kiln, he explains that it gives the mill the option to be more flexible in its product mix, and get into some specialty products, but notes that it was designed to be converted if needed to a UDK. 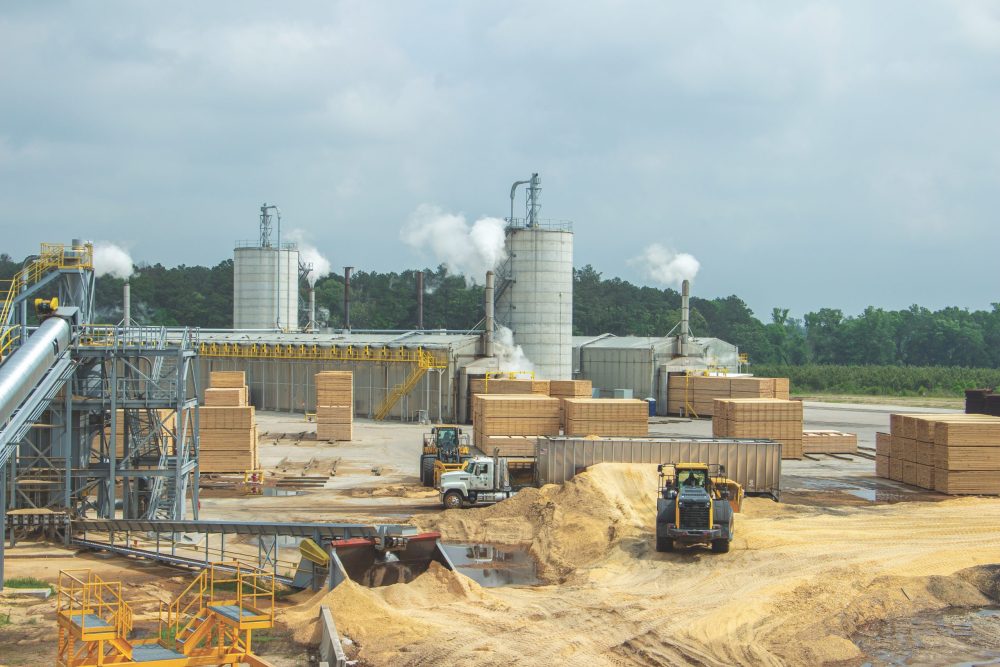 Coming out of the kilns, lumber meets a USNR tilt hoist takedown system ahead of a USNR planer machine, quad cam lug loader and USNR transverse high grader merchandizing line. A dual sort bin system from USNR with 80 bays total, first 25 being duals, allows the merchandizing system and cut-in-two to be more efficient. “This way, we’re maximizing efficiency on that line and long lumber is sorted on the back end,” Quarles explains.
Once sorted, finished packs are made with a USNR package maker, strapped using a Signode machine and then stored in the warehouse for trucking.

All rolling stock, big and small, is provided by Taylor. Scanning mill-wide was provided by USNR. The vibrating conveyors in both the green end and the dry end were provided by Mill Power. Western Pneumatics handles the chip, bark and shavings bins, as well as sawdust collection in the sawmill.

CORRECTION: An earlier version of this article incorrectly identified the USNR kilns as continuous dry kilns or CDK. These are USNR UniFlow kilns, or UDKs. CFI apologizes for the error.