Features
Speed is of the essence: a look at the latest primary breakdown technology at the mill

HewSaw
HewSaw’s latest updates include a new 3R log positioner, which will allow for faster feed speeds of over 700 feet per minute; a predictive maintenance program, which will result in increased uptime; and DX sawing, which is available on all new sawlines. The DX sawing option offers sawmills faster speeds and a thinner saw kerf by reducing the depth of cut with two sawing phases instead of one. DX sawing is available in the cant saw and ripsaw.
www.hewsaw.com

Linck
In addition to the high-end profiler unit VPM450, the smaller VPM 350 was developed especially for small log lines. The reduced adjustment paths allow for a positive effect on the machine width and further reduces the masses to be moved, thus resulting in smaller gaps between cants for operating modes with sawing optimization. The VPM 350 also has a few special features, namely the ability to saw lumber surfaces without tear-outs, the possibility of diagonal profiling by using tilting tool axes and the possibility of curve profiling by pivoting cutting tools.
www.linck.com 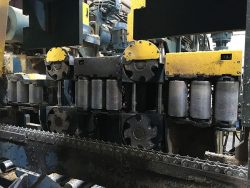 Comact
Comact has introduced new sawing lines with double limitless profilers combined to a splitter at primary breakdown. Unlike the “pocket” type profiling heads, the new double limitless profilers allow the production of two side pieces of different widths. In addition, it offers an endless range of widths and up to four inches for the thickness of a block or a side cant.
www.comact.com

Sawquip
With its modular design, Sawquip’s 10 axes profiler easily adapts to a mill’s production line for both primary and secondary breakdown. Its scope of operation covers all production, whether in hardwood or softwood species. Installing a Sawquip profiler improves the flow of the plant by reducing the crowded wood supply to the edger. The profiler is designed to transform logs up to 30 inches in diameter and 12-foot thick cants. It’s fitted with centering rolls and servo-cylinders. Driven by an electric motor, its feed rate can reach 600 feet per minute depending on the application.
www.sawquip.com

Optimil
Optimil is now using a new true balanced cut horizontal arbor saw box to remove the side boards from the cants. This design allows higher feed speeds with better control to eliminate mismatch that occurs from a similar saw box. In recent years, Optimil’s designs have grown to incorporate state-of-the-art sawdust and chip containment to promote a cleaner environment and safer workplace. With over 180 extended length log infeeds running, exact placement and presentation of the log to the cutting tools is proven. Now these added value machine modules also have a roll, improving mill flow and profits.
www.optimil.com

USNR
Selective profiling is a creative new concept USNR recently implemented that has improved recovery, reduced bottlenecks, and smoothed out the flow at sawmills. Mills can now choose which logs to profile and where processing decisions make more sense as logs go to the edger. USNR’s new board separator, the Selective Separator, diverts sideboards to two different destinations: profiled boards are routed to the trimmer, while unprofiled flitches head to the edger. Select profiling boosts value and speed, reduces edger bottleneck, and speeds up primary processing because saws have a smaller depth of cut. The trapezoidal profiling makes the edging process more efficient because wane is profiled off.
www.usnr.com