Aug. 2, 2017 - Mother Nature is a tough competitor. And for 65-year old B.C. logging outfit Squamish Mills operating in the Sea to Sky region between Pemberton and Squamish, she’s their biggest rival. 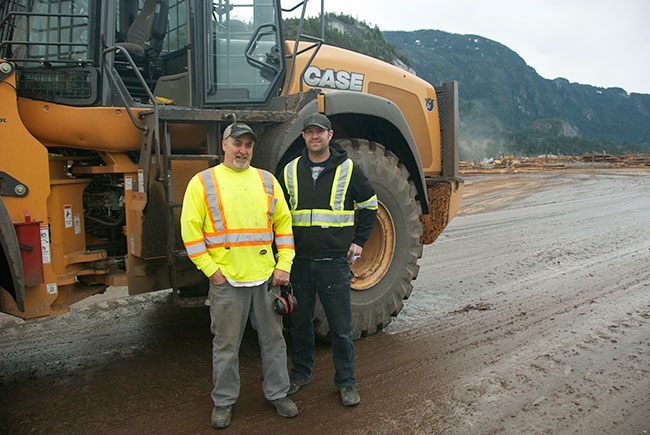 “You remember hearing about the Meager Creek landslide seven years ago?” Phil Mazzotti, operations supervisor and head mechanic for Squamish Mills, asks. “It was a massive slide. There’s about eight pieces of our equipment still buried in it.”

Luckily the 48.5 million cubic-metre slide was far from any logging camps so no one was injured in what is estimated to be the largest landslide in Canadian history.

“Mother Nature beat the heck out of us the year before last with all the forest fires in Pemberton that took out half our cutting blocks. We had some fallen wood it took too that was ready to go,” Mazzotti says.

The fires were followed by flooding in the Pemberton area in the end of 2015. “It was so bad it washed one of our bridges out,” Mazzotti recalls.

As with most loggers, it’s the day-to-day problem solving that outranks long-term concerns, be it market conditions or the changing climate. “We are a logging company, but logging is something we do in-between the screw-ups,” Mazzotti says. “It’s our slogan around here.”

Despite the losses to Mother Nature, Squamish Mills is doing something right. The company bought out two other contractors over the past several years, and is now aiming to harvest about 70,000 cubic metres this year, much of which is Douglas fir and cedar with some hemlock, balsam and pine in the mix.

Squamish Mills’ origins go back to March 1951, when John Drenka and Patrick Joseph Brennan formed the company. John Lowe, CEO and president of Squamish Mills, began working for the company in 1966.

“Logging companies like us really are the foundation of the forest industry and also our communities,” Lowe says. “The money that we turn over, a big percentage of it stays within the community. And we’re just one of a number of loggers in this town.”

Squamish Mills encompasses three branches, a logging outfit of the same name, a dryland sort operation called Howe Sound Log Services, and a hauling outfit called Howe Sound Timber. The one company with 40-50 employees covers all bases, either directly or through contractors: engineering, road building, falling the wood, hauling, sorting and storing in the water, as well as brokering the logs.

“We leave it to our brokers, S.A. Mowat Ltd., Bill McEachnie and Greg Sikina, to sell the logs,” Mazzotti says.

The company’s dryland sort operation is located at the northernmost tip of Howe Sound in the shadow of the imposing Stawamus Chief mountain. The dryland is the destination for thousands of logs a day, trucked in and grouped into more than 50 sorts. The company’s office too is in Squamish, but the bulk of the company’s logging operation is near Pemberton, 91 kilometres north.

Squamish Mills employs just one logging contractor to harvest their blocks – Pemberton-based Shier Enterprises, owned and managed by Ray Shier and his sons Dustin and Dillon. The wood is hauled out by contractor Burritt and Son Trucking.

At their dryland sort, Squamish Mills will take on other fibre from Shier Enterprises’ other contracts to sort, bundle and place in pockets. The dryland will see about 120,000 cubic metres this year.

Big iron
As Shier Enterprises handles the harvesting and loading phases, they are purchasing all Squamish Mills’ logging machines. The fleet includes a Tigercat H855C processor and L870 feller buncher, 2002, 2013 and 2016 Hitachi log loaders, and a Cat 545 skidder.

The fleet is rounded out with two grapple yarders: a Madill 122 ½ and a Washington 78A Skylok (no longer made). The yarders are not used very frequently, Mazzotti says.

Byron Brock is the man in the cab of one of the new Case wheel loaders, and the supervisor of the dryland. He’s been in the industry for 35 years, the last four of which have been with Squamish Mills.

“There are a lot more sorts now. Compared to when I was starting out, we used to have nine or 10 sorts, now we have 53,” Brock says. “The logs go 53 different ways get bundled up, on average about 30 per load, depending on what kind of wood and if it’s second growth or third growth.”

Over time they’ve become more efficient in handling the greater number of sorts, Brock says, and equipment like the new Case make that happen. “It’s operator friendly too which is nice for us,” he says.

The size of their operation means that the company is often looking at new equipment. “It seems like all the time, actually. But probably around 5,000-6,000 hours we start looking, which is about four years,” he says. Some of the high-use machines like the wheel loader will put on 2,000 a year.

Safety focus
Safety is paramount for the company. Five years ago Dwayne Constantin, who was at the time working for Squamish Mills, was killed while logging in the Joffre Creek area north of Pemberton.

Mazzotti says that incident set in motion the company’s efforts to enshrine safety in its daily operations. “It is very important that safety is first,” he says.

Now employees have tailgate meetings every morning and supervisors and managers take part in safety meetings every month in the office. Squamish Mills is also in the process of getting safe certified through WorkSafeBC. “It’s a big deal because WorkSafeBC needs to know we are serious,” Mazzotti says.

Lowe says spreading the safety culture throughout the company was at times challenging, particularly at the beginning.

“When you’re in the business for 50 years you get used to doing things a certain way,” Lowe says. “We’ve had to say, ‘You do it this way now or you’re not going to be working for us.’ Safety procedures have to be followed religiously to work, and that’s what we do now.

“From a safety point of view, things have improved in the bush 1,000 per cent. Has it cost us money? Absolutely. It’s a costly thing, but it’s something we have to do,” he says.

Future fibre
In the machine graveyard of Meager Creek, Squamish Mills is once again hard at work building access roads that skirt around the slide area in order to continue cutting high-value fibre in the block.“There’s about 300,000-500,000 cubic metres of wood out there – that’s good old- and second-growth wood – that we are now trying to get out. We have to build a multi million-dollar road to get at it and we’re almost there after four years,” Mazzotti says.

The company is no stranger to reaching difficult stems. A couple years ago Jeff Drenka, Squamish Mills’ logging superintendent, oversaw the heli-logging of a timber sale near Furry Creek, south of Squamish. “Our fallers went up there and they actually jigged the wood and then the heli came and flew it out,” Mazzotti recalls.

The license term was for three years so the block is still open. Lowe says they are waiting for the right time to get back in or apply for an extension. “It’s kind of like a chess game, when the time is right you have to make the move,” he says.

While concerns about the softwood lumber duties and shrinking fibre supply are in the back of their minds, Lowe says, “These are things that until they become a concern they are not a concern. There’s not a lot you can do about it before it happens.”