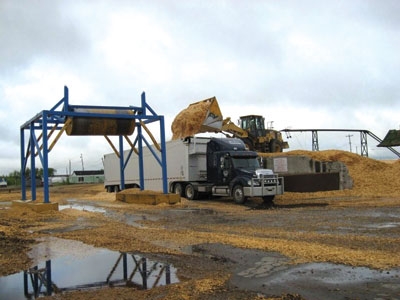 Having done it since 1985, Michel and Gyslin Alary, the owners of Nor-Jean Transport in Hearst, ON, know the challenges only too well.

“Given the harsh conditions under which we operate, durability is an important quality we expect from our trailers. They must stand up to challenging stresses, while at the same time providing us with maximum volume” says Michel.  “And it doesn’t hurt if they look great too,” he adds.

Alary admits that he was initially attracted to Titan Trailers by their light weight and increased volume, but their strength and toughness, and the excellent response to his needs and service he has received from Titan president Mike Kloepfer and product specialist Rick Lees have kept him coming back.

“For us,” says Kloepfer, “we really had to understand the implications of working in one of the coldest regions in Canada, and what that would do to the product being transferred, as well as the trailer.”

Customer driven
“When local dealer All North took on the Titan line, we agreed to test a THINWALL possum belly. Rick and Mike got it right when we were negotiating the first unit back in 2001,” says Alary.  “Since then we have requested a number of custom-built features to meet our needs and the specs of our drivers. If they want something different for the ladder or for the basket up front, we ask for it. We get exactly what we want.”

All North’s Marc Levesque describes the trailer Titan built for Nor-Jean. “Here’s the situation. Loads of warm chips and sawdust create condensation in the winter which can create ice walls a foot thick on trailer walls, causing a loss in volume. To solve this problem, Mike Kloepfer suggested insulating the unit’s front and side walls with plywood. This really did the trick. Other custom-built features included modifications to the front catwalk for tarping and a mesh rear-door to reduce wind resistance when the trailer was returning empty. An oversized, two-way sample door that can be opened from inside was also added to the trailer,” says Levesque.

“Both Rick and Mike from Titan made the trip to Hearst to participate in the trials of the first unit, something we really appreciated,” says Alary. “For them, it’s not just about selling a trailer; it’s about customer satisfaction and making sure the unit is performing as desired.” 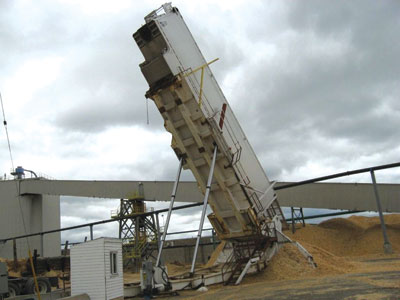 Since Nor-Jean purchased their first custom-built THINWALL trailer – Titan’s first Super Quad Possum Belly Trailer – they have not looked back. Today, Nor-Jean has eight Titan trailers in operation – six possum bellies and two walking floors, including the first unit, which is still on the road. Their front-to-back welded panels remain straight, and all look as new today as the day they were delivered, something that never ceases to amaze Michel Alary.

“Customers really notice the quality of the Titan THINWALL trailers, they all look so new,” says Alary. “It’s good for Ministry of Transportation checks too. It looks and pulls like a brand new rig. They rightly assume that it is good to go and they wave us on.” 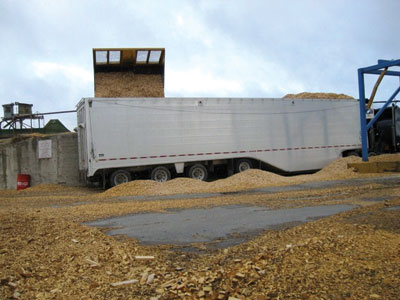 Every summer Nor-Jean’s Titan trailers are given an acid bath from oldest to newest. And every summer they come out of the bath looking as bright and straight as brand new. “It looks like Nor-Jean has a brand new fleet every year,” says Alary.

Nor-Jean’s mechanic, Bernie Pominville, shares Alary’s enthusiasm. “They are marvelous to work on. They’re in a class of their own,” says Pominville. “I’ve been working on trailers for over 20 years and I can say that they are one of the only ones where everything is set up properly. There’s lots of clearance underneath and everything is easy to see and very accessible. Things like grease fittings, brake adjustments and shocks are all easy to reach. Scheduled maintenance is a breeze, and keeps us on the road.”

Troubleshooting is easy too. “With the maintenance book you don’t have to search for anything,” says Pominville. “If something needs to be repaired, we go to the book and we know where everything is from the diagrams. We go right there and fix it, and out the trailer goes again.”

The relationship between Titan Trailers and Nor-Jean Transport remains as strong as ever today. “When you get to know Titan, you know you’re buying quality,” says Michel Alary. “Now when we need a new trailer, we just call Mike and Rick and say Build it again.”