Sometimes you need a new, and higher perspective to clear up recurring problems. For years, clearing cross-ups in the infeed deck has been a simple, and recurring, fact of life at the Swanson Group Lumber Mill in Glendale, OR. To Mike Lawless, log yard coordinator, it seemed that continual repaving of the yard around the mill was another of those jobs that, no matter how well you do it, you will soon be doing it again. 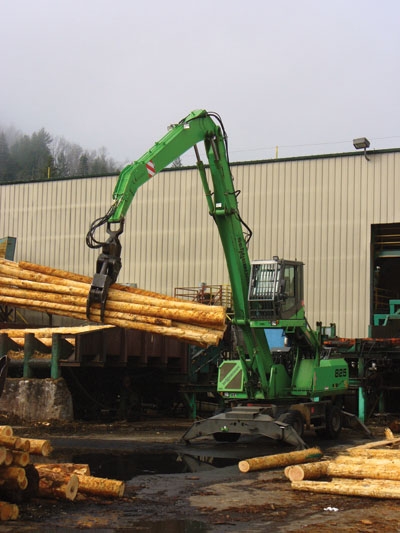 Sometimes you need a new

These jobs may never completely disappear, but both have been simplified since last October, when Lawless brought in the mill’s first Sennebogen log loader.

The log sorting and crossing problem was a side-effect of an upgrade in 1997 to the dimension mill. High-speed scanning and breakdown equipment was installed, and the mill soon found that it would have to assign one of its log loaders to pick out occasional jammed/crossed up logs and clear the path as blocks were forwarded up from the debarker toward the mill’s infeed.

Mike Lawless’ equipment fleet included a few log loaders, which normally deck logs when the log infeed outpaces the sawmill. A photo eye senses when the infeed deck is full. The debarked, cut-to-length blocks are then diverted to a surge area so the debarking, scanning and log processing can continue unhindered. The loaders are also used to high deck and feed the mill a select diet of various sized logs to increase the mill’s production rate. The grapple-equipped loader selects and feeds the proper mix of logs, ranging from 6-20 inches in diameter, to ensure that the ratio of cants to boards exiting the vertical band saws will keep both the twin and the gang edgers operating at optimum capacity.

At first, the mill’s big wheel loader was delegated to correct cross-ups along with its usual duties. However, the short debarked segments are slippery and tricky to manage for the big machine designed to grab a full load of 40-ft logs.

The task was then given to the smaller tracked loader, but Lawless says the mill layout doesn’t lend itself to precision log picking. Seated in his cab, the loader operator had no clear line-of-sight into the conveying area where jams occur. Clearing jams became a painstaking job for two, with a “spotter” acting as a second pair of eyes for the loader operator, helping him guide the grapple to take hold of the jammed log and move it into place.

Costly Gaps
According to Lawless, the system was less than perfect – and small misses with the loader proved costly. Occasionally, through no fault of his own, the loader operator would inadvertently damage a conveyor belt or another piece of equipment. The mill’s production, running at 50 MBF per hour, would come to a sudden stop. The repair bill for the conveyor alone would be thousands of dollars, and the lost production cost even more.

Times like that gave Lawless more than enough opportunity to observe the other problem his track machine was causing. Pointing to a 12-inch deep puddle in the pavement, he says “…their steel lugs, constantly turning on the asphalt, just ground it away. Every couple of years it was costing us $15,000 to $20,000 to repair the damage to the asphalt surface. Add that to downtime and cost of replacing conveyor belts, this problem with the log cross ups was adding a lot of cost to the operation.”

Lawless first became aware of Sennebogen material handling machines as a possible solution when a magazine ad caught his attention. Popular in recycling yards and port facilities, Sennebogen green line machines are well known for their hydraulically elevating cabs, and come on either tracked or rubber-tired platforms, the latter being ideal for pavement.

Lawless sharpened his pencil to calculate the potential cost savings. When the numbers were in, it was clear that a Sennebogen 825 M machine could save them money. Along with its low maintenance costs, the 825 M is much lighter than Swanson’s tracked machines and consumes considerably less fuel to operate. He arranged for delivery of a demo unit to give him a first-hand look at that elevating cab.

Six Months Later…
After six months, the 825 has proven to Lawless that it’s the right machine for the job. Although smaller than the mill’s other loaders, the 825 M is fast, agile and able to easily complete all of its required tasks with time to spare, and without damaging the asphalt. Still, it’s the machine’s ability to elevate the operator above the log jams that gives it a unique advantage.

“Elevating 19 feet above ground level makes it easy for him to see the grapple at the end of the boom,” Lawless explains. “He can precisely locate the log he needs to free or move. And he no longer needs a spotter. There’s hours of employee time saved and the potential for equipment damage is greatly reduced.”

Vernon Richardson agrees. As a loader operator who often takes on the clearing tasks, he asserts that his job is now a lot less stressful. “It’s more relaxing now that I’m able to actually see the block I am grabbing.  Not having to depend on someone else to be positioned to be my eyes also speeds up my response time in getting the jams cleared.”

Fuel efficiency has turned out to be another bonus. Consuming less than half the fuel of the larger tracked loaders throughout its two shifts per day, the 825 M will net Swanson better than USD $50,000 in fuel cost savings for every year in service.

Lawless says he can also foresee such machines and their elevating cabs taking a larger role in the yard. The efficiency and nimble performance of the green machines could also lead to cost savings in high-decking applications. While the 825 M is among the smaller units in the Sennebogen line, Lawless estimates that an appropriately sized model with the elevating cab could cut the time required for high decking in half.