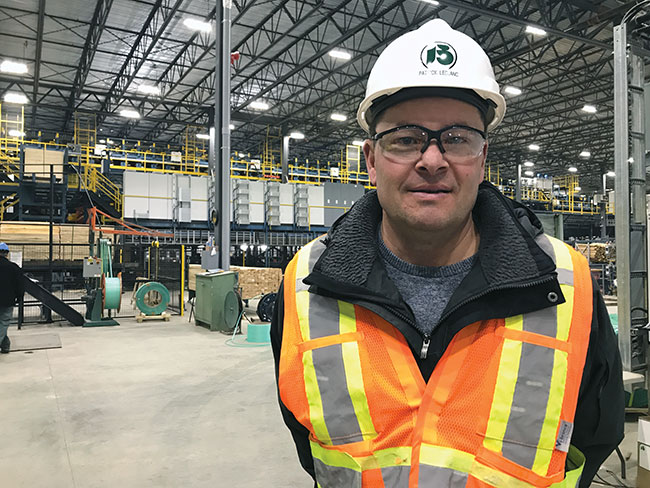 Wood is being pumped out quickly in Amos, Que.

The facility powered up its new line several months ago, but when Canadian Forest Industries visited in February, it had not yet finished breaking-in the new system. That process, which should be completed shortly, should spark even more productivity gains.

The Matériaux Blanchet team is highly ambitious. The company’s latest expansion tripled the size of its Amos plant to nearly 62,000 square feet and migrated it from mid-1970’s equipment to the latest state-of-the-art technology.

“Our old factory was so obsolete that it took five shifts to plane all of the production,” Leblanc says. “Today, performance is so good that we can do it in only two shifts.”

“Our six-roller is an ideal planer for the sizes [Matériaux Blanchet] produces,” says Heidi Danbrook, Gilbert’s sales manager. “These range from 1 x 3s to 2 x 6s. They also opted for our GRIP system, which detects variations in thickness. The rollers adjust for the wood that enters the machine.”

During our visit, a mechanic cleared up a blockage that appeared in the planer in less than a minute, by simply pushing a few buttons.

“We can make most adjustments fairly quickly,” Leblanc says. “Employees are separated from the machine by glass plane, so they remain safe at all times.”

Like the Gilbert planer, almost all of the machines in the new factory were chosen for their performance characteristics and were made in Quebec. For example, the company’s Rodair dust collector comes from Lévis, Que., and its DO2 automatic wrapping machine was designed in Dolbeau-Mistassini, Que. Wood is transported using Fabmec machinery, which comes from Saguenay, Que., and the boards are sorted by a Comact GradExpert optimizer from Saint-de-Georges-de-Beauce, Que. 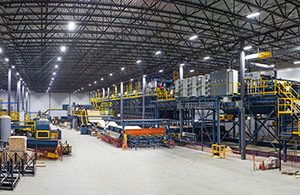 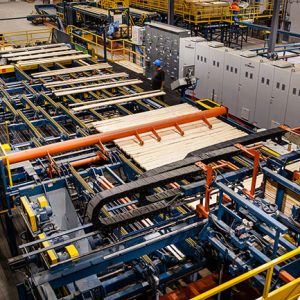 The boards at the planer mill are sorted by a Comact GradExpert optimizer from Saint-de-Georges-de-Beauce, Que. Photo courtesy Scierie Blanchet.

Adapting to the transition
The upshot of the new investments is that, during the second half of 2019, Matériaux Blanchet advanced its technology by nearly a generation.

“By day, we operated the new factory; by night, the old one,” Leblanc says. “This employee training schedule enabled us to ramp up production at the new factory quickly because if there were blockages, we could take the team and send them back to the old factory.”

The new technology sparked a complete reorganization in Matériaux Blanchet’s workflow planning. The planing work shifts were cut from five a day to just two. The machinery was so efficient that it enabled the company to trim 20 posts, a necessary evil during a period when the company was hit by crippling labour shortages.

“It was about 50/50,”Leblanc says. “We reassigned some employees; others left for retirement or for new positions.”

Claudine Gauthier, who has worked as Matériaux Blanchet’s optimization and quality manager for the past five years, notes that the tasks of the workers who stayed have been completely transformed.

“The automation significantly reduces the physical effort employees expend and the number of decisions they need to make,” Gauthier explains. “In the old factory, everything was done manually. The speed of the machines meant that they could handle the wood, but we no longer wanted them to do that.”

Leblanc was also impressed with the results. “We probably tripled the speed of the line,” he notes. “An employee used to produce about sixty boards per minute, now we run 200. But it’s a big transition. They have to step back and let the machine operate in automatic mode.”

That said, programming the machines requires occasional fine-tuning, Gauthier says, because the optimizer still has trouble detecting some faults, such as the presence of rot in a plank.

“Jack pine is particularly complicated because the grain is darker, so spots sometimes appear to the machine to be rot, but aren’t,” Gauthier says. “But we have to be careful making adjustments because if we go too far, the machine might not detect rot that actually exists.”

Towards state-of-the-art mills
Even as their old factory was being dismantled for scrap, the Matériaux Blanchet team was already thinking of the next stages of modernization. These will include better production integration.

“We’d like our GradeExpert to be able to ‘talk’ to the planer, to adjust the cutters,” Leblanc says. “Right now, we still have a mechanic who goes out to measure the thickness of the wood and who makes the adjustments himself.”

Other upgrade projects are expected to be completed during the coming years.

Meanwhile, the company is completing a “sister factory” for the Amos mill in Saint-Pamphile, Que., which opened in March. That should make competitors green with envy!

Upgrading the facility
Several vendors pitched in to help Matériaux Blanchet upgrade the planer mill in Amos. These include EBI Electric, which unrolled more than 40 kilometres of cable to supply power to all the equipment.

“We play an important role in meeting the tough delivery schedule,” says Dominic Mercier, assistant to EBI Electric’s director, who is also working on the Saint-Pamphile project.