Features Mills Sawmilling
Staying ahead of the curve: OptiSaw 2018 showcases the latest tech 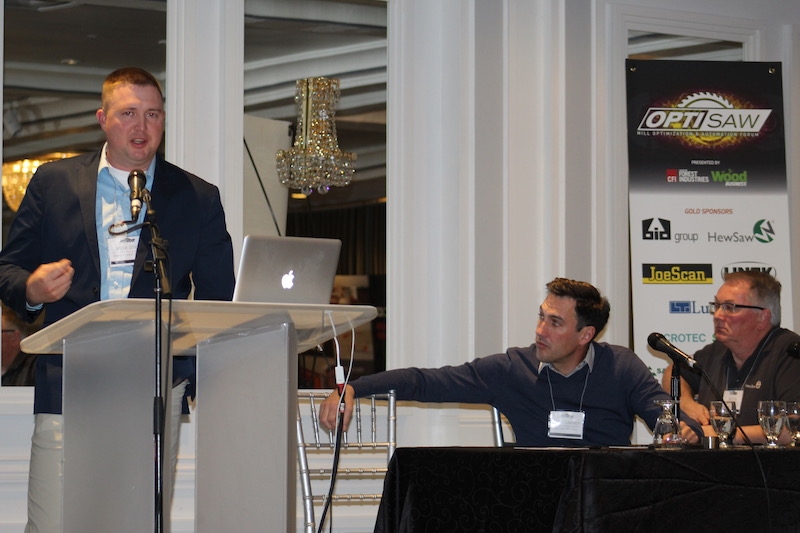 This year was no different. Industry professionals, consultants and researchers gathered at the Crowne Plaza Airport Hotel in Montreal on Nov. 28 to hear 10 speakers share insights about new innovations and projects.

From learning about FPInnovation’s SM2 Initiative to understanding how artificial intelligence (AI) can be applied to lumber grading, attendees heard presentations on a range of topics, and also had the opportunity to ask questions and network with their peers.

Lucidyne’s chief technology officer, Patrick Freeman, gave the first presentation of the day about the application of AI in lumber grading.

Freeman first gave a technical overview of how machine learning (an application of AI) has evolved from identifying objects by assigning different coloured boxes to each, to neural networks – software that emulates neurons in the brain – which can be trained to ‘learn’ what different objects are on their own.

Lucidyne has taken this technology and applied it to lumber defect detection. Called Perceptive Sight, the system can identify board defects such as decay and mineral stitch. It uses multiple sensors to do so, including colour/tracheid sensors, T3 sensors (which show the annual rings in the wood), throughboard sensors (which create x-ray-like images), and geometric sensors.

However, Lucidyne faced a few challenges when it came to applying machine learning to lumber detection, Freeman admitted. They needed to train people to use the program and hire experts to label the defects in different boards.

Consequently, the company decided to work with certified lumber graders, who look at hundreds of boards, labelling every edge, and teach the program to identify these defects.

To date, Lucidyne has identified over 50 classes of defects and 14 species, with a full-time certified crew adding more than one species per month

Following Lucidyne’s Patrick Freeman’s presentation, and keeping with the theme of artificial intelligence, Rory Armes, founder and CEO, Eight Solutions Inc., took the stage next at OptiSaw, sharing insights on how the forest industry can enact value from “cheap AI.”

For Armes, “cheap AI,” means the Internet of Things (IoT), or internet-connected sensors and devices that produce data that can be analyzed for key performance indicators (KPIs). For example, mills can use the data to predict maintenance breakdowns.

Eight Solutions provides a data analytics and IoT platform called Cumul8, in partnership with BID Group, which collects real-time data from sensors and devices. The platform includes “The Envision Editor,” which uses live data to build models and create KPIs for analysis. The process is simplified so non-programmers can use it and create predictive models.

By collecting and analyzing all of this data, mills can save time and money, Armes said. For example, a pellet producer needed to predict the conditions that would lead to a critical conveyor malfunction, to alert operational personnel ahead of time and prevent downtime. With Cumnul8, the existing facility was retrofitted by connecting multiple existing data sources, building models and creating dashboards for staff to use. Using this data, the mill successfully prevented downtimes and ultimately saved over $3.5 million.

The third speaker of the day, Damien Meyer, Linck representative in Canada, shared a case study of a successful upgrade at a mill: Saskatchewan-based Edgewood Forest Products.

Edgewood was looking to increase its production and run logs up to 20 inches in diameter. After some debate, the mill ultimately turned to Linck to supply the new equipment, which included new profiling technology, diagonal alignment of cants, 2×2 side boards, a horizontal split saw and more.

All of this had to be done within limited space, since the existing downstream and upstream equipment was already in place, so Linck installed the new equipment in stages, including a 180-degree log rotator. They also kept as much existing equipment as possible, Meyer said. In the end, this helped achieve another one of Edgewood’s goals: to continue production for as long as possible.

Ultimately, once the line was completed, throughput through the planer mill improved by 20 per cent.

Trevor Reid, general manager of Edgewood Forest Products, was part of the crowd at OptiSaw. He shared some of his thoughts about the experience, concluding that the mill is very happy with the new equipment. “This technology in Europe – I do believe and I subscribe to the fact that it’s the way of the future for us,” he said.

Nick Barret, president of SiCam Systems, was the fourth presenter of the day at OptiSaw.

For example, mills typically use a real-time system to make adjustments on a cant machine, alerting quality control personnel when a saw drifts too far and requires manual adjustments. But SiCam’s closed-loop technology makes automatic adjustments. The program will get chipping heads on size, look at the windows of boards, then go after the left and right saws, and finally adjust the face.

The technology can also be used to provide some open face auditing and decide if the optimizer is correctly determining the diameter of logs on a regular basis.

“Just being able to track and trend that overtime is a huge opportunity we’ve discovered with the closed loop,” said Barrett.

After lunch, FPInnovations’ director of the SM2 Initiative, Serge Constantineau, presented on the initiative, which consists of several research projects on smart and flexible manufacturing that can improve sawmills’ operations.

According to Constantineau, there are currently 15 projects ongoing and $19 million committed to those initiatives, with a budget of $42 million set over five years.

Constantineau discussed a number of these projects, including one that automatically identifies wood species using bark. The system is currently working in a sawmill, learning to recognize species. While it is over 94 per cent accurate, they still have a “glitch” with fir, he said.

Another project, in collaboration with Autolog, is currently being tested in a mill – an automated species separation system for green and dry conditions, which Constantineau said will improve drying productivity, grade and yield recovery.

As part of the initiative, there are also a number of technologies and concepts that are not yet being tested, but which have enormous potential. For example, an ultrafast drying technology is currently in development. It can dry a 2×4 jack pine in less than two hours, and a spruce in close to two hours, said Constantineau. This is a “very interesting and game-changing opportunity we’re looking at,” he remarked, and, judging by the reaction in the room, the crowd agreed. At this stage of the research, FPInnovations is not sharing details on the drying technology involved, Constantineau said.

As Constantineau mentioned in his presentation, FPInnovations has been working with Autolog on a project that automates species separation. In his presentation, Francis Paquin, research and development specialist for Autolog, elaborated on how this works and its impact on productivity.

The project uses near infrared (IR) spectroscopy – a high-speed, non-contact and non-destructive method – to automatically separate species. A sensor head with a halogen lamp is positioned over a sawline, providing near IR light and some visible light, Paquin explained. Some of this light is absorbed, while some of it is reflected back. The reflected light is sent to a spectrometer via a fibre optic cable. Each species absorbs and reflects the light differently, which allows the sensors to distinguish between them.

While the project was initiated by FPInnovations, “Autolog jumped in to develop the software, modules and installed the system in a mill to run tests over a very large period for hundreds of thousands of logs,” Paquin said.

Pierre Bédard, project manager, optimization group for USNR, took the stage at OptiSaw near the end of the day. He highlighted how profilers can help various types of log lines improve their lumber recovery and productivity.

To illustrate their benefits, Bédard provided a simulation analysis.

Moreover, with the same log consumption, the “improved” sawmill will produce 181,818 mbf/year compared to an average sawmill’s 150,000 mbf/year. This means higher lumber revenue, he said. In his simulation, the improved sawmills earned an additional $7.091.

The three speakers came together to discuss the new equipment recently installed at IFG’s Lewiston sawmill. As one of the largest producers in the U.S. West, “we have to be efficient if we want to stay in the game,” Short said. Consequently, the company turned to Springer-Microtec and HewSaw to upgrade their Lewiston mill.

The idea behind the system was “sawing from the inside out,” said Short, by using Microtec’s CT scanning and fingerprint technology to identify the most valuable boards, as well as defects that cannot be seen from the outside. This prevents a shutdown while also optimizing the mill’s cuts.

Laudon then went into more detail about Springer-Microtec’s CT scanning and fingerprint technology. The CT scanner features a large rotating x-ray source with sensors, which provides high-resolution 2D “slices” – one per centimeter – of the log and puts this together to create a 3D volume image. Using image processing, internal defects are detected, and then the system determines the optimal cutting pattern and shows the virtual boards with the defects.

After the logs have been debarked, they then go through a three-step process to match the debarked log with the original. The operator finds the log using the fingerprint technology and its CT scan data, and then finds its current orientation on the conveyor. The debarked shape is then merged with the image of the debarked log and re-optimized.

But according to Short, “one of the keys to success with the Microtec optimization platform and CT scanner is the HewSaw line.”

HewSaw’s Tice then showed the crowd a video of how the new HewSaw SL250 23.4 multi-unit sawline works at the Lewiston mill. The sawline includes a HewSaw log rotator, cab spinner, ripsaw, board separator and cross saw. The log rotator “is able to execute rotation and position better than any other in the company,” Short said.

Tice also shared some of HewSaw’s new technology, including Dx sawing, which features two sets of saws on a cant machine. The first set performs pilot cuts, and the second finishes it, allowing for faster sawing.

Find archives of the presentations on www.optisaw.com soon and watch for news of our next OptiSaw event in Richmond, B.C., on June 13.

Thanks to our sponsors