March 11, 2016 - In northern Ontario, forestry is a way of life. Surrounded by trees as far as the eye can see, much of the province that lies above the 49th parallel is surrounded by lush forests full of jackpine, white spruce and black spruce. 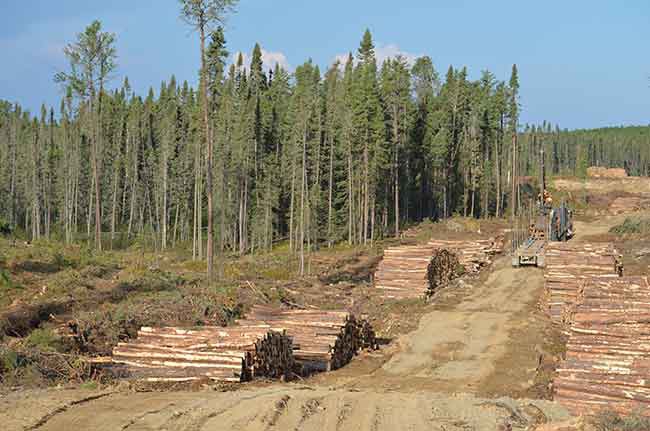 Sawlogs are loaded and trucked southeast to the Resolute Forest Products sawmill in Thunder Bay. In northern Ontario

Many children are exposed to the forest industry at a very young age, through school field trips, weekend hikes through the woods and the tales of family members who have toiled their way through the industry.

For Jason Rouillard, it was working the family’s woodlot with his dad that hooked him on working in the forest from a young age. Rouillard’s family owned a private woodlot, and father and son would log the land using a chainsaw and cable skidder. The elder Rouillard was also a staple of the forest industry, working in management with Resolute for 32 years.

For Rouillard to find his way into the forest for his career, with that much sawdust already running through his veins, was a surprise to absolutely no one.

Formally, Rouillard started his career as Jason Rouillard Logging in 2003, working as a subcontractor for a contractor who was logging for Abitibi in Thunder Bay. When he first started, Rouillard owned a single piece of equipment, a harvester. As he became more aware of the needs of the operation, he added a forwarder, then a road machine to start building resource roads, and the business grew from there.

“One machine led to another machine, which led to us taking on the whole job from the stump right to the mill gate,” Rouillard says.

In 12 years, Rouillard has managed to grow his one-man show to a crew of eight in the forest, plus four truckers (all brokers) for hauling the wood.

Slow recovery
It hasn’t always been easy for Rouillard and his team, who endured the devastating recession that knocked so many out of the Canadian forest industry.

What has allowed Rouillard and his team to weather the storm, initially, was the ability to specialize in wood lengths that were still experiencing a reasonable amount of demand.

But the recovery from the crash has been slow, making it difficult to stabilize profit margins and look towards future growth. Also, there has been no significant bump in the price paid for logs from the forest, and some of the lumber cut gets rejected before it even makes it to the sawmill site.

Building relationships
One of the key reasons for Rouillard’s success has been his ability to form relationships with the equipment distributor community in northern Ontario.

As Rouillard added pieces to his fleet, he was diligent in testing multiple makes of machines, especially those available within the Thunder Bay region. Rouillard and his team cut a mix of around 50 per cent spruce, 40 per cent jackpine and 10 per cent hardwood. The team targets a cut of around 50,000 cubic metres per year, but often cuts between 30,000-40,000m3 based on the cut blocks available and the weather conditions in the region.

In his early years, Rouillard had a great amount of success with John Deere forestry equipment. As a result, he has grown a strong relationship with the team at Nortrax in Thunder Bay, which is the distributor for John Deere equipment throughout the region.

“I prefer John Deere equipment because of the quality, reliability, and the equipment seems to have the best value for the money we spend,” Rouillard says.

The support provided from John Deere has been especially important on the service side, as Rouillard has purchased several lightly-used machines from Brandt Tractor in British Columbia. Despite not selling them the machine, Nortrax hasn’t hesitated to provide whatever service has been needed.

In the past 12-18 months, Rouillard has replaced most of his cutting fleet. That includes a feller buncher, processor and forwarder that have all been upgraded to newer John Deere units. Many of those machines were on display on the day we joined Jason in the forest about halfway between Thunder Bay and Atikokan.  That morning, the 2154D forestry swing machine with a Waratah HTH622B multi-stem harvesting head was tearing through the forest, followed closely by the 2013 Deere 1910E forwarder.

Yet despite the appreciation for the value of the John Deere fleet for his harvesting operations, Rouillard has turned to another local contact for the purchase of road construction equipment: Toromont Cat. The dozer and loader used in his roads operations, also an integral part of his business, are both Cat pieces that have been locally-sourced by the Toromont dealer in Thunder Bay.

Challenges remain
Like many harvesters in regions where wood supplies are plentiful, there is still the challenge of getting qualified operators to run the equipment.

“I’ve heard other contractors abroad say the same thing; it’s hard to get good, solid people,” Rouillard says. “We’re not seeing a whole lot of young people coming in to the trade, learning it and sticking with it. Finding good quality people in general is getting harder.”

Rouillard believes that, if the entire wood products industry can find stability, whether it be through secondary avenues for products like biomass, or a steady market for Canadian lumber, that will be the most valuable tool in attracting people to work in the woods.

Thanks to the stability that the emergence of northwestern Ontario’s wood pellet sector has provided for contractors like Rouillard, he and other industry professionals might be able spare the time to build a plan to attract the next generation to the industry rather than continue to constantly stress about the bottom line.

Biomass emerges
The emergence of a new sector has provided greater stability for logging operations like Rouillard’s, the wood pellet sector.

The arrival of Rentech in Atikokan which, at capacity, is expected to produce upwards of 100,000 tonnes of white pellets per year, has provided a source for fibre rejected by the sawmill.

“It’s a good market that accepts any kind of wood,” Rouillard says. “Like the wood that is not well-suited for the sawmill, for lumber, we can send that to Rentech. It’s value added to any forest that is not good for lumber.”

That’s good news for logging crews in the area surrounding Atikokan, where 45,000 tonnes of Rentech’s pellets are being used as fuel at the OPG generating station. The region is scattered with active logging sites cutting for a variety of sawmills, including multiple mills owned by Resolute.

The financial prospect of cutting wood strictly for use by Rentech is not a very profitable one based on today’s pricing structure, but it certainly provides piece of mind in cutting blocks when a significant percentage of thin, broken or bent stems can destroy any chance of a profitable venture for a logging crew.