Dec. 5, 2018 – Creole Dufour and his younger brother Easten run their own steep slope logging operation called Essential Evergreen in the Monashee Mountains near Lumby, B.C. Their work includes many high-risk steep and conventional blocks, which is where the new Timbermax Traction-Winch enters the picture. 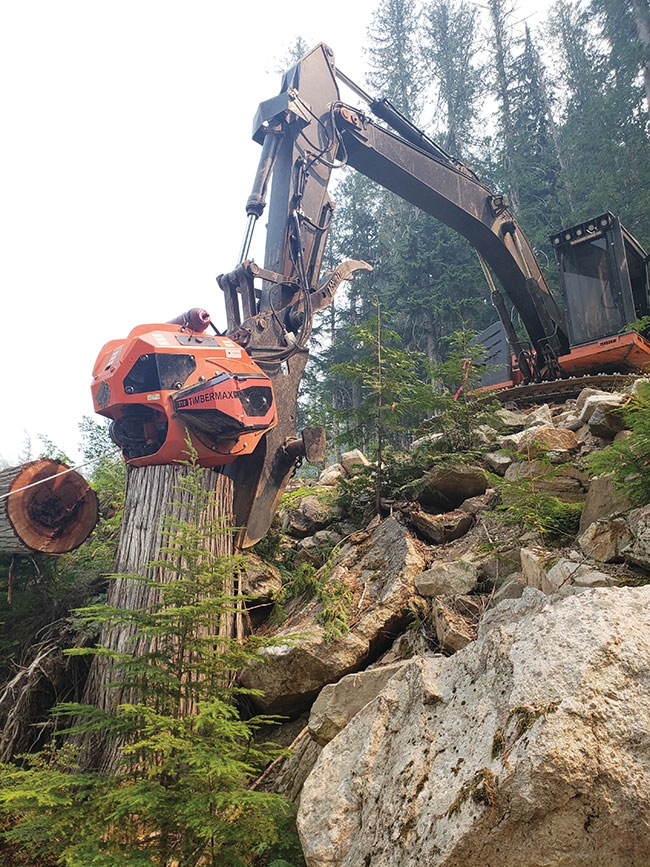 Creole says he and Easten are always being pushed to skid steeper ground, which prompted them to look for a safer way to do that work.

“The more that we can do with a wheeled machine, the better. It’s more cost-effective to use rubber tire skidders than track machines, but we need to do it safely. And the Timbermax provides us a way of doing that,” Creole says. “The versatility of it, the ability to switch it in half an hour from a winch machine to a road builder and back again really sold us on the concept.”

Creole and Easten are the Timbermax Traction-Winch’s first customers in B.C. and had been using it for about a month at the time of publishing. Creole says they find it to be user-friendly and simple to run.

“There’s some information you need to know, and there’s some safety features that you need to understand, but I think it’s really well thought out and very easy to use,” Creole says.

Forestry in the family
Creole, 39, who started his contracting business in 1996, says he and Easten, 31, were introduced to forestry by their father, who was a horse logger.

“My family has a woodlot license, so I worked in the forest during the summer to make money,” Creole explains. “I’ve been involved in the forest industry my whole life, one way or another.”

Creole says he enjoys working in the forest environment where he feels satisfied to see the results of his work each day. “It’s like being little kids playing with toys in our sandbox. You get to use a lot of cool equipment and have a lot of fun doing it,” he says.

Creole says he typically runs the skidder or the dozer excavator alongside the Timbermax. He also repairs and maintains all of Essential Evergreen’s machines, while Easten runs the ClimbMAX tethered harvester.

Creole says the Timbermax can be flawlessly controlled from the skidder’s cab by the operator or it can be remotely operated. “We use the remote to feed out or retract line when it’s not connected to a machine,” he says.

The brothers use Tigercat skidders and bunchers, and Hyundai log loaders, excavators and processors.

Coming across the Timbermax
Creole says he and Easten initially came across the idea for the Timbermax winch through Mike Niedziejko, who is the owner of heavy equipment dealer Top Down Enterprises Inc. and exclusive dealer of the Timbermax Traction-Winch in Western Canada.

“Mike was talking about that style of winch on a quick change for an excavator and I thought it was a great idea, and told them that if they ever pursued it, we would help them set it up and test it to see what would happen,” Creole explains. “Mike told me to be careful what I say, and sure enough, they did want to try setting the machine up and here we are.”

The Timbermax Traction-Winch is manufactured in Canada by InovForest Forestry Equipment Inc. Owner Mathieu Lavoie is also the engineer. “We’ve adapted his knowledge and experience into what’s going to fit best with our market here,” Niedziejko says.

Niedziejko says his company was looking to provide a product that is very simple to install onto an excavator.

“There are lots of winch options out there right now. Some of them are very expensive and cost-prohibitive for smaller contractors to get into,” Niedziejko explains. “This one is a proven winch technology that we’ve adapted to be able to work on a variety of machines.”

The Timbermax Traction-Winch comes in three sizes: the T10, T14 and T20. Creole uses the T10, which comes in at about $245,000 with installations. The T14 and T20 will become available for heavier equipment. Niedziejko says the cost is relative, depending on the install and what the machines receiving the system already have or don’t have.

Creole says he expects the machine to pay itself off in three years. “On the other hand, if it prevented one accident, it would have paid for itself instantly,” he says. “Because it’s a lower price point than a lot of options out there, it works in our versatile woodlands that we deal with and the different blocks that we deal with.”

The T10 is up to a 10-tonne constant pull winch, with 450 m of a 16 mm winch cable on it. The basic weight of the winch is about 3,500 kg plus mounting bracket, and that’ll depend on which machine it’s mounted on, Niedziejko explains.

“It allows Creole to use his existing equipment with minor modifications, and allows it to increase his capacity to work on the slope safely,” Niedziejko says when asked how the winch can improve operations for contractors.

Safety first
“The Timbermax has improved our work site because we don’t have to build as many trails to access wood,” Creole explains. “And we can safely get to ground that otherwise I would be uncomfortable asking a skidder to move on to. It solves a bit of a problem for us in getting certain patches of wood. Now we have an answer.”

The Timbermax winch poses a low chance of rollover or loss of control of the machine. Creole says he and Easten were initially cautious, like with any new technology. “But after using it, even for a couple hours, the feeling of security that you have once you realize how well the system works is quite relieving,” he says. “It’s quite a difference from just ground skidding untethered. And it’s so much easier on the machine as well.”

InovForest and Top Down Enterprises Inc. have integrated a number of key safety features into the winch, Niedziejko says. “We’re trying to stay ahead of the curve on communications and the safety side.”

“We’ve tried really hard to make the installs as simple as we can, so we can install on a range of carriers without excessive modifications. The winch system is really refined and has safety features that contractors require,” Niedziejko says. “The winch has integrated communication features that are being talked about now and that are going to be required in the future. The system as a whole will enable operators to be able to focus on the task at hand, with minimal input.”

Niedziejko says three more B.C. contractors are interested in the traction winch following a recent demo, and there’s global interest from Chile, Brazil and the U.K. Overall, he says there’s a good reaction to the machine, which began working in the field in July.