October 6, 2015 - Steep slopes are a challenge most logging operations encounter at one time or another. But for Van Ommen Contracting, steep slopes for high-value logs are a way of life. Of course, overcoming challenging harvesting operations within the Okanagan Valley isn’t the only way the Canoe, B.C.-based company shows its on-site adaptability. 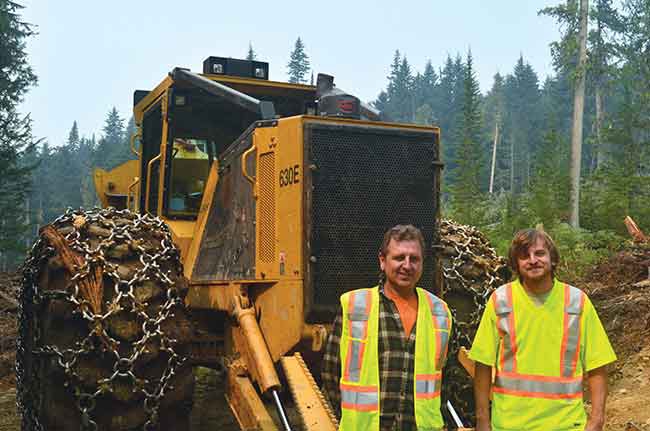 John Van Ommen and his son Steep slopes are a challenge most logging operations encounter at one time or another.

The company harvests a variety of timber for the Louisiana-Pacific Corporation, which takes the logs and sells them to the highest bidder. Since they don’t supply one or two particular mills, Van Ommen always has to be ready to change sorts and specifications.

“We’ve been as high as 14 sorts with different specifications for companies,” says John Van Ommen, owner of Van Ommen Contracting. “There’s lots of changing on the fly. We have to be quick to react and that’s just part of the deal.”

“It makes it tough for them,” says Tavis Mann, equipment sales rep for Inland Sales in Vernon, B.C.

To learn more about the steep slope contractors, Canadian Forest Industries travelled up 12 kilometres of winding roads to their current logging operation in the Yard Creek area in Malakwa, B.C. After arriving at their camp, I met up with John and his son, Kelly, who is running his own processor at the operation and learning how to run the business for when the time comes for his father to hand over the keys of Van Ommen Contracting to him.

Humble beginnings
John Van Ommen started his career in forestry in 1975, working in the Salmon Arm forest district. He became interested in forestry at a young age, watching his father run a stud mill in Silver Creek, B.C. in 1969 and 1970.

Other than short stints on Vancouver Island, Fort St. John and a sawmill in Malakwa, he has worked his entire career in logging in the Salmon Arm area.

In 1979, he decided to branch off on his own and work as an independent, working with a power saw and a pick-up truck.

“Back then we used to get $35 a truckload,” John says. “It wasn’t very profitable. Some days you got 10 loads, other days you got no loads.”

He operated that way until 1986, when he bought his first harvesting machine.

Fast forward to 2015, and John works alongside a crew of five in his logging operations and upwards of three people for road building.

“John is a neat individual because he’s built his company from the ground up,” Mann says.

Van Ommen Contracting typically harvests about 80,000 cubic metres of high-value timber annually, but as John explained, “It’s the timber and the terrain that dictate production.”

A family affair
John has two sons that work with him in his logging operations. His son Kelly owns Gorge Creek Logging, which John sub-contracts to perform the processing and loading side of Van Ommen Contracting. Kelly bought the Tigercat H855C processor from Inland two-and-a-half years ago, and bought the company’s 2005 CAT 325C log loader two months ago. Currently Kelly handles all the loading and processing operations.

“I think it’s a good way for him to learn the business,” John says. “The two go together well.”

John’s other son, Tyson, is a professional falling contractor, who works for a variety of logging companies, including Van Ommen.

“Ideally I would like both the boys to take over one day, we’ll just have to see how that evolves,” John says. “It’s got to be your passion. You’ve got to live and breathe it. You have to be in a machine, or at the [very] least, on the ground every day.”

Kelly has been learning how to jump into any role within the operation, which will reduce his learning curve once he takes over the operation.

“If you know all aspects of your job, then you can explain to other people how to do them,” John says.

Ironically, Kelly, who is 26 years old, had no interest in a career in forestry growing up.

“I was never that into it until I started working in it,” says Kelly, who started working for his dad’s company after graduating high school at 16 years of age. “I was doing landscaping for minimum wage and my dad offered me two dollars more an hour, so I switched.”

Kelly enjoys the work environment and the day-to-day challenges that logging presents him.

“I like working outside and seeing different country,” he says.

He enjoys being an owner in addition to being an operator, although he does find it a challenging transition.

“I’m just trying to keep everything going,” he says. “I still have to work a full shift, plus paperwork and maintenance. It takes a lot more time than I thought.”

John’s nephew, Ary Hickman, also works for Van Ommen and is a long-time employee with the company, working as its main skidder operator.

John Van Ommen and his son

harvest a wide variety of timber for the Louisiana-Pacific Corporation

Steep competition
When asked what was some of John’s toughest harvesting over the years, the first thing that came to mind was after the big fires in the Kelowna area in 2003.

“We were logging some really steep slopes after the fires,” he recalls.

That’s not to say that John minds being presented challenges in his operations.

“We’re always pushing the envelope for what we can do and always looking for ways to do it better,” John says. “There are always new types of machinery coming out that help you do it better.”

Van Ommen has a long history with Tigercat, purchasing its first track buncher from them in 1997; the fourth ever made.

“The bunchers are a great machine, really dependable,” John says. “We also get really good support. When we’ve got an issue, they’re out here.”

John says he really likes the speed of his most recent acquisition, the 630E skidder.

“We’ve skidded up to 1.7 kilometres,” he says. “On a long forwarding trail it cuts down the cycle times a lot.”

He also likes the turnaround seat design in the 630E skidder, particularly for his long-time employees who have experienced some mobility issues.

“It’s much easier on the neck, especially for guys who have been doing this for 20 years,” John says.

Staying diverse
In addition to providing a variety of log specifications and sorts, Van Ommen also has a road building side to the business. John initially worked alongside K+S Builders, until the owner of K+S retired and John bought him out.

“It helps to have road building when logging is struggling,” John explains.

When the logging side of the business was suffering during the recent economic crisis, John had the road building side setting up cellphone sites for companies in several areas in the B.C Southern Interior, including Revelstoke and Malakwa.

Pushing forward
When asked where he wants the company to go in the future, Kelly has a simple and practical answer.

“Keep doing what we’re doing and keep moving forward,” he says. “It would be nice if the market comes back a little more, too.”