That was the starting point for Seth Dickinson of Dickinson Logging, who knew he needed to make a smart equipment purchase to respond to the increase in business.

Dickinson is a sub-contractor for Ecko Logging and cuts for the West Fraser mill in Hinton, Alta. The operation cuts 28,000 to 30,000 cubic metres per month, with Seth and his team processing and skidding. They cut a mix of pine and spruce, with a little bit of aspen, all in the three-to-five metre range. The pine and spruce are cut to 12, 14 and 16-foot lengths, while the aspen is cut to eight feet.

Last July, as the company went back to work in the forests south of Hinton, Dickinson purchased a Tigercat 630E skidder to replace his older model (the first one sold in Alberta), but that only solved half the problem. With a Link-Belt 240 running a Waratah 622B harvesting head that had almost 19,000 hours on it, he knew he needed another solution.

“I was looking at the new (Tigercat) H855C and the Waratah rep in town was telling me about the new 622C and how good it should work for me.”

It turned out that the Wajax distributor in Hinton had a Waratah 622C in stock. Seth had worked with rep Barry McBride before, and was very happy with his previous experience using a Waratah harvesting head. Before long, Dickinson had the 622C in the forest.

Laser-like start
One of the first things he noticed was the laser find edge system.

“We had to cut a cookie with the old head,” Dickinson says. “With this one, the laser find edge is really good and the mill really likes what we produce.”

Dickinson also noticed a significant new development between the 622B and the 622C, one that has already proved beneficial in the wood mix being cut by the company.

“The link arm on the C, between the drive arms, is slotted,” Dickinson explains. “With the B, it’s hooked solid. I find that the slotted version really works nice because it gets a good grip on the tree.”

The 622C 4x4 has both single-stem (5 to 66cm) and multi-stem (5 to 28cm) capabilities, which help Dickinson move from small to larger diameter wood, a challenge he has faced in the past.

“You can pick two trees up and shuffle them back and forth in the head, individually, to line them up so that you’re not cutting too much off for cookies. It’s really accurate.”

That accuracy and versatility has been a major selling point for Dickinson, and has significantly increased his profitability.

“When we first started cutting back in July, the block we were cutting in was really, really poor,” Dickinson says. “We were just barely getting by with the B. We were doing between 1,000 to 1,200 trees per eleven-and-a-half-hour shift. With the C head, it put us up to 1,400 to 1,700 in that time period.”

Now that Dickinson has had a few months of operation with the 622C, he’s started to discover some of the other benefits of his new harvesting head.

“The C has a whole new valve in it, it’s much cleaner and easier to work on. You don’t have to take anything apart to get at something to do maintenance.”

And while the head has, by itself, been a huge benefit for the logging contractor, the equipment he paired it with has also made a noticeable difference.

“The combination of the Tigercat 855 and the Waratah 622C is really good. The carrier has a lot of horsepower and a lot of flow. It really runs the head nice, and it’s super fast.”

The smart purchase Dickinson needed to expand his business is already paying dividends in the forest and on the bottom line. 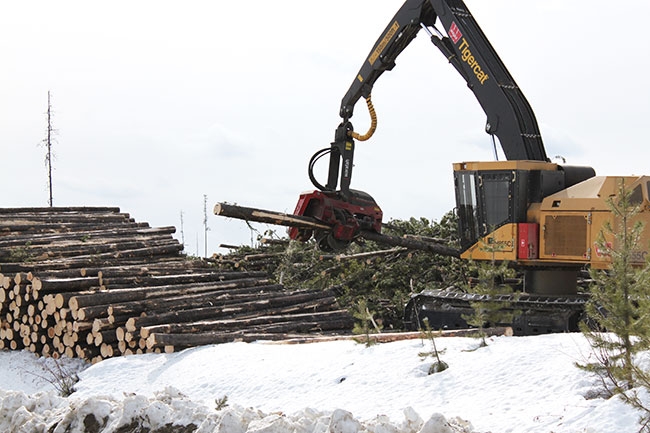