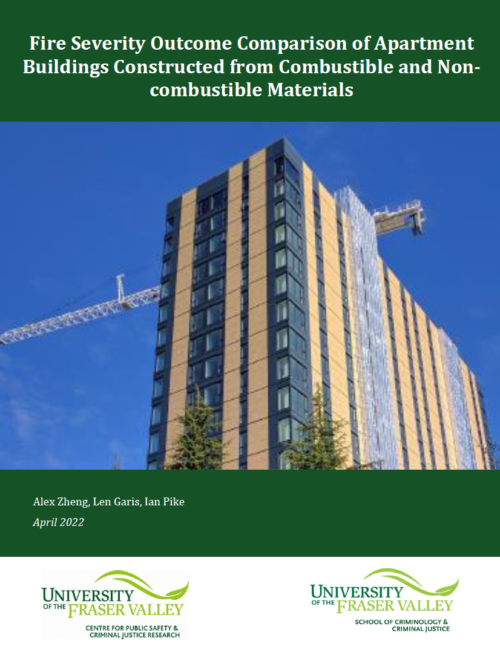 New real-world research is highlighting the safety of new tall wood buildings, as interest in timber construction continues to grow across Canada and the globe.

The article was based on the authors’ April 2022 study Fire Severity Outcome Comparison of Apartment Buildings Constructed from Combustible and Non-combustible Materials, published by the University of the Fraser Valley in British Columbia.

The authors, who specialize in fire safety and injury research, analyzed almost 14,000 apartment fires across Canada and determined that when protective systems such as smoke alarms and sprinklers are in place, the type of construction (combustible or non-combustible) did not affect fire severity. It was the first widely distributed study using real-world scenarios to validate this theory, which had previously been demonstrated in various research using case studies, controlled environments or computer modelling.

“We know the presence of working smoke alarms and sprinklers not only saves lives but reduces fire severity, both reducing the effort of extinguishment by the fire department and preventing fire spread beyond the room of origin,” said Larry Thomas, fire chief for the city of Surrey. “Given that sprinkler and alarm systems are required in all new building construction, we can have confidence that property and lives are being protected regardless of whether the building was made with wood, concrete or steel.”

The authors set out to challenge the long-held perception that wood, while commonly used in construction, is less safe than non-combustible materials such as concrete or steel.

This belief has persisted despite mounting evidence to the contrary, as well as an increasing interest in building with wood – mass timber in particular – in Canada and around the world because it is natural, sustainable and economical. Mass timber refers to durable and fire-resistant panels, posts and beams created by gluing or fastening layers of wood together.

Until 2009, B.C.’s building code only permitted wood structures up to four storeys tall. At that point, height restrictions began to ease with the growing understanding of the protection offered by modern building design and safety requirements, including sprinklers and smoke alarms, fire separation, fire-retardant treatments on materials and cladding, and fire service inspections.

Today, British Columbia permits wood construction up to six storeys and with mass timber construction up to 12 storeys, mirroring a change anticipated in Canada’s next National Building Code. However, projects exceeding those limits are taking place using alternative approval processes.

In April 2022, B.C.’s provincial government launched a Mass Timber Action promoting mass timber manufacturing and the demonstration program it launched in 2021 with funding for 12 mass-timber projects and research. These include a fire station, airport terminal, commercial and residential buildings up to 20 storeys. According to a B.C. government backgrounder in April 2022, 285 mass-timber buildings were completed or underway as of December 2020 in the province.

Wood building heights are rising around the world as well. A 2021 update to the International Building Code allows for mass timber buildings up to 82.2 metres (270 feet) tall, or about 18 storeys.

Some of the world’s tallest completed mass timber structures to date are the Brock Commons residence at the University of British Columbia (18 storeys) and buildings in Milwaukee, Wis. (25 storeys), Brumunddal and Bergen, Norway (18 storeys and 14 storeys), London, England (10 storeys), and Melbourne, Australia (10 storeys).

Architects have released designs for even taller buildings, including 31 storeys in Toronto and 32 storeys in Switzerland. The State of Timber 2022 report released in February 2022 by the Council on Tall Buildings and Urban Habitat in Chicago counted 139 mass-timber buildings of eight storeys or more that are complete, under construction or proposed around the world.

How safe is mass timber?

The authors analyzed data from Canada’s National Fire Information Database (NFID) and the British Columbia Office of the Fire Commissioner (BCOFC) for fires in apartment buildings up to six storeys in height. Information from the NFID was limited to those jurisdictions that reported on construction materials from 2005 to 2015: B.C., Alberta and Manitoba. This was augmented by BCOFC data from 2007 to 2019.

Fire severity was measured based on number of fatalities, number of injuries, whether fires required fire department extinguishment, and fire spread. Factors considered included construction material (combustible or non-combustible), protective systems (none, smoke alarms only, sprinklers only, or both) and height (storeys). Material was considered combustible if it was made from open wood joist, wood protected by plaster, or heavy timber.

The NFID dataset provided 9,711 apartment fires for analysis, with a total of 74 fatalities, 961 injuries, 4,032 (42 per cent) requiring fire department extinguishment and 1,950 (20 per cent) spreading beyond the room of origin.

Similar patterns were found in the BCOFC dataset of 4,474 fires, which resulted in 32 fatalities and 429 injuries, with 1,794 (40 per cent) requiring fire department extinguishment and 421 (nine per cent) spreading beyond the room of origin.

The following insights can be made from studying the combined data:

Overall, the analysis demonstrates that building fire safety is influenced more by protective systems than construction material. This supports earlier research, including a 2015 modeling study that found the risk of death and injuries due to fire in mid-rise and high-rise residential buildings was similar between wood and non-combustible materials, if fire detection and sprinklers were in place.

“With all types of construction, it continues to be the responsibility of the Fire Service to robustly manage and monitor buildings to ensure their fire safety systems remain maintained and functioning,” said Thomas, the Surrey fire chief. “At the same time, the combination of sprinklers, smoke alarms, fire-resistant materials and other fire-protection systems in new buildings have made them the safest in history for both occupants and fire crews, regardless of height and building material.”

Limitations of the study included a lack of robust data resulting from the low occurrences of fully-developed fires in residential buildings – which would provide insight into the performance of building materials fully involved in fire – as well low death and injury rates.

Despite this, the study contributes a valuable real-world perspective to the growing body of research demonstrating that modern-day protective systems and construction methods offset the fire risk associated with combustible building materials.

Overall, the findings support the continued use of wood and mass timber for taller structures when protective systems and other fire safety practices in place.

Click here for the Fire Technology article and the original research paper.

Len Garis is director of research for the National Indigenous Fire Safety Council, Fire Chief (ret) for the City of Surrey, B.C., associate scientist emeritus with the B.C. Injury Research and Prevention Unit, adjunct professor in the School of Culture, Media, and Society at the University of the Fraser Valley (UFV), and a member of the Affiliated Research Faculty at John Jay College of Criminal Justice in New York. Contact him at lwgaris@outlook.com

Alex Zheng is a Biostatistician/Researcher at the BC Injury Research and Prevention Unit. He holds an MSc in Biostatistics. Contact him at alex.zheng@bcchr.ca.

Ian Pike is a Professor with the Department of Pediatrics in the Faculty of Medicine at the University of British Columbia; Director of the British Columbia Injury Research and Prevention Unit, Investigator for the BC Children’s Hospital Research Institute, and Co-Executive Director for the Community Against Preventable Injuries. Contact him at ipike@bcchr.ca.